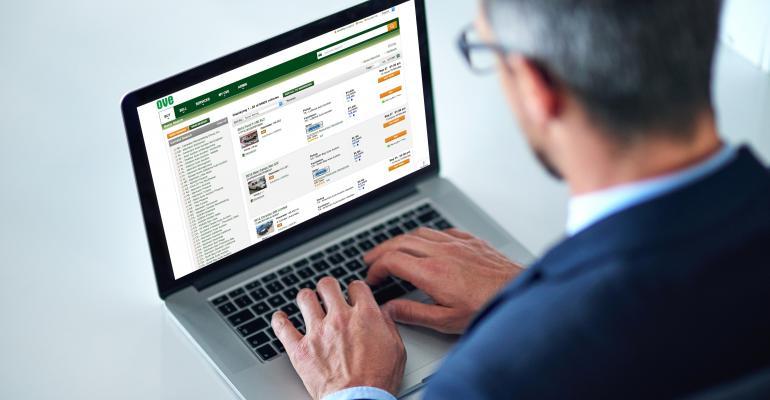 Manheim has touted its digital auto auctions for more than a decade now, but the effort got a big boost this year from an unexpected – yet ominous – source: COVID-19.

That digital activity suddenly went from about 50% of the company’s sales in 2019 (2.3 million vehicles) to 100%, although volumes dropped because dealers weren’t in the mood then to restock slow-moving used-vehicle inventories. (They are now, as the hard-hit pre-owned vehicle market recovered quickly from March and April’s sales cliff dive.)

The physical auctions have since reopened – sort of. Bidders once again can go to those facilities to check out vehicles up close and personal. But social distancing and the likes are in place. And the vehicles stay put in the parking lot. They no longer go down the auction lanes with bidders standing on the sidelines.

Still, most auction action in that setup comes from online bidders because of simulcasting that brings in Internet users, Zack Hallowell, Manheim Digital’s vice president, says during an online presentation entitled, “Update: Manheim’s Shift to All-Digital.”

Despite the social distancing practiced at the physical auctions, many bidders nonetheless are loath to attend in person because of COVID-related crowd concerns, he says. So they log on rather than walk in.

“Dealers are choosing digital over physical,” he says. “Ninety-five percent of Manheim locations now offer in-lane bidding, but 87% of purchases are still from digital buyers.”

Pre-COVID average online auction attendance was 83,800 in the first 11 weeks of the year. The current average went to 87,900 during June through September, Hallowell says.

“Off-site wholesale is setting new records,” he says, citing a 42% year-over-year increase and a recent three-month surge. “The market has clearly shifted to more of a digital mode.”

Consequently, Manheim is investing $20 million in higher resolution and faster online imaging. The Cox Automotive company also is nearly doubling to at least 15 the number of images it shows of a vehicle for online auctioning. That will include undercarriage photos.

Digital bidders will receive more detailed condition reports, something many of them have been requesting, Hallowell adds.

Manheim offers various digital auction formats, ranging from general ones to others limited to same-brand dealers who bid on those brands’ vehicles, usually off-lease cars and trucks.

Hallowell likens the swift swing to digital to “an awakening” among many dealers. “We had the early adopters and then the ones who really hadn’t tried it. We’ve seen that second group step up as they address new market conditions.”

Despite the “all-digital” reference in the title of his presentation, he declines to say if Manheim someday might reach that point.

“We’ll continue to evaluate all options.” For now, the current public health concern “means not running cars (in auction lanes) every day. But I’m not going to say we will always continue to not do that. Never say never.”

Yet, clearly digital auctions eliminate the logistics of a physical auction, including the transportation of vehicles to and from single locations and the overall cost of running such sprawling facilities.

In May, with Manheim’s nationwide chain of physical auctions closed because of the pandemic, Sandy Schwartz, then head of Cox Automotive, was asked if the day will come soon when they’d reopen.

His response that indicates how far Manheim wants to go digitally: “I hope not.”