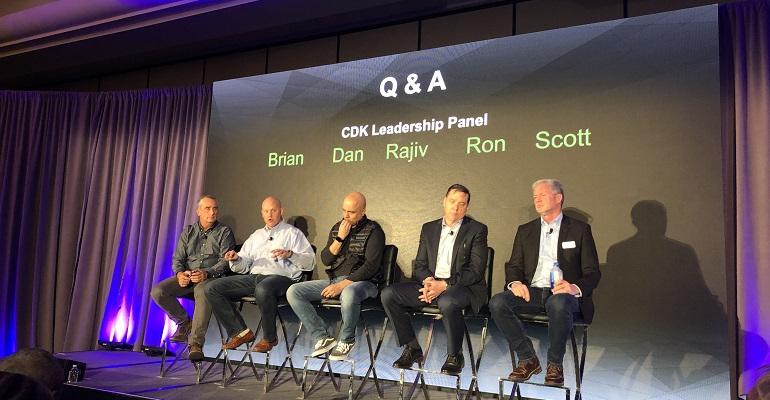 CDK Gets Serious About Customer Service

CDK Global, a major retail automotive technology company in the midst of an ambitious customer-service improvement initiative, is learning a thing or two from a business it recently acquired, eLEAD1ONE.

In outlining the new program, called Customer Success, CDK executives acknowledge their company could have done better in the past of serving the information-technology service and support needs of its dealer clients.

“We’ll be a different company,” vows Dan Flynn, president of North American operations, noting feedback from some dealers had been, “You don’t serve us well.”

CDK is on a mission to change that around.

“After talking to our dealers and listening carefully to their needs, we agreed it is time to forge a new path where our customer service is concerned,” says Brian Krzanich, an Intel veteran who became CDK’s CEO late last year.

“Dealers want and need an engaged, dedicated service approach that gives them insight and data about their operations, so they can drive improvements and get more value out of their systems,” he says.

He calls the Customer Success model “a markedly different approach to dealer service; one that is data-driven and proactive.”

Flynn adds, “You will see evidence of us behaving differently.”

Asked at a media event if CDK was fixing something that was broken, Krzanich replies: “I wouldn’t say that. CDK is a growing, profitable entity, and much of this work was in place before I showed up. But there are more opportunities if we just apply these strategies.”

Elements of the project include the expansion of a dealer-service team consisting of support staffers, advocates and performance managers who consult with dealers on matters of improved profitability.

“We’re not going to just ask dealers how business is,” Flynn says. “We’re going to talk about issues and how we can drill down and address them together. We want to unlock the value of our products.”

Of the 100 support staffers assigned to the project, about half are organization internals. The rest will consist of people with automotive or technology backgrounds.

CDK also has expanded its support hours 30% to align with dealer hours, including weekends and most holidays.

Another element of the program is simplified billing, Flynn says. “It was a problem we had to tackle. When customers say it is not easy doing business with CDK, we want to address that.”

CDK brass say they’ve learned much from eLEAD1ONE, a recently acquired company that provides customer-relationship-management software and call-center services to dealers. In its 30 years, eLEAD has built a reputation centered on customer service and retention. CDK employs about 10,000 people, eLEAD about 1,500.

“The week we closed the (CDK-eLEAD) deal, my team was in the midst of doing the Customer Success organization, and we spent a week with their group talking about what makes them so successful,” says Michael Seeman, a CDK vice president who leads the Customer Success initiative.

“The two things they do well are sell and retain customers by paying attention to service,” he says during a Wards interview of executives involved in the acquisition and Customer Success.

“Your customers are your biggest advocates,” says Bill Wittenmyer, an eLEAD partner and vice president-sales and operations. “We consider our clients as partners and listen to them.”

He cites fundamental similarities in his company and CDK. “Maybe we didn’t recognize that initially, but it became quickly apparent. You knew it was a good marriage. We were a nice puzzle piece that fit into CDK.”

“We spent a lot of time not only integrating from a technology standpoint but also from a business and culture standpoint,” he says. “Great technology by itself isn’t enough. We’ve been good listeners.”

Of CDK’s measured approach of integrating eLEAD, Amar says, “It’s easy to be an arrogant company that comes in, does what it thinks needs to be done and then calls it a day. Historically, that never works well. Yet a lot of companies do it.”