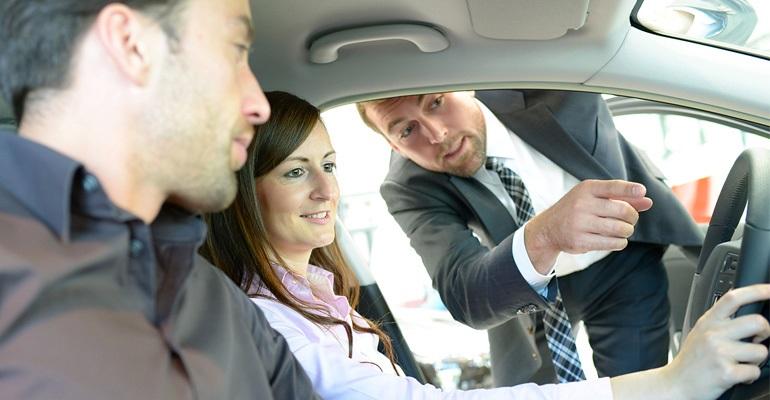 Istock/Getty Images
“Shoppers are more open than we give them credit for,” Gross says.
Dealers

In a WardsAuto Q&A, market researcher Madison Gross talks about delving into the mind of the automotive customer.

“It’s our first meaty effort at customer research,” she says. “We did two things. One was a giant survey with more than 5,000 respondents. We looked at shopping habits for different groups, including Millennials and Hispanics.”

The surveyed people were asked how they used different automotive websites, how long their shopping process took and when they first visited a dealership compared with when they made a purchase decision.

“Secondly, with a panel of people who allow online tracking, we looked at their digital behavior leading up to their purchase of a car,” Gross says. “That allows us to see which websites they use and how often they visit them. Otherwise, it can be hard for someone to remember everything like that when self-reporting.”

Results from the two research methods is contained in the CarGurus Buyer Insight Report, due out in September. “It’s a combination of the survey and the tracking to understand what they were doing and why,” says Gross, CarGurus senior manager-consumer insights.

In a WardsAuto Q&A, she talks about study findings. (And also answers three questions she reportedly loves to be asked.)

WardsAuto: What are study highlights?

Gross: One thing that stood out is that shoppers are more open than we give them credit for. Of people who were replacing a prior vehicle, about 70% switched brands from the car they owned before.

For a lot of people getting back in the market today, they don’t really know what’s out there compared with when they last bought a car. The buying cycles are longer and the technology is newer. It’s a totally different ballgame.

Some people said they were sure of what they wanted in the beginning but then changed their minds. So a lot of decision-making happens in the car-shopping process.

WardsAuto: Is that a consequence of being exposed to additional information throughout their journey?

People look for cars primarily through search today, and then go to other information outlets.

The other thing is that if you delay your dealer visit until the very end of the shopping process – which happens more and more – you can get into your mind that you’ve picked the perfect car, but then when you see it in person you say, “Oh, it’s just not right.” That can cause people to change their minds, even though they thought they were certain. (Madison Gross, below left) WardsAuto: What dynamics are causing that delay?

Gross: A couple of things are going on. One is consumers are taking their shopping behaviors from other areas, and shifting them to automotive. Everything else we do online we are expecting to be able to do with auto. You are seeing less in-person engagement.

The other thing, rightly or not, the dealership experience doesn’t always have the best reputation. So some people put off going to the dealership.

(The irony is that) most people who go to dealerships say they actually have pretty good experiences.

WardsAuto: You look at online dealership reviews, and they tend to be favorable. Every now and then, someone tells a horror story, but most people give dealers high ratings.

Gross: They’re usually good. If you are really ready to buy, and go to a dealership, you’ll be treated really well.

WardsAuto: You mentioned earlier people are open when it comes to vehicle shopping considerations. An automaker who’s potentially losing a customer might say they are disloyal. And if they are taking a lot of time to decide, one could say they are indecisive rather than deliberative. What about those different interpretations?

Gross: It depends on where the shopper is. If they are in an early shopping stage, they might be considered indecisive. But by the time they get to the dealership, they usually aren’t anymore because they’ve done a heck of a lot of research.

Parts of buying a car are exciting. Other parts are, “How many hours am I going to spend on the Internet going from one site to another? How do I keep track of everything?”

WardsAuto: Consumers are nothing if not varied. Some of them who do lots of research and finally get to the dealership are not out to get the perfect unicorn car, because they don’t want to start the process anew.

Gross: You do see some people looping back and starting all over again in a moment of total defeat.

WardsAuto: Were there any surprises in the study?

WardsAuto: How long was the average shopping time? Was it short, long or all over the place?

Gross: We saw about five weeks in total. Most of it was pure online research. The first dealer contact and the subsequent visit happened really close to each other.

WardsAuto: Your bio says you love to answer three specific questions, so we’ll ask them. The first is, “What roles do cars play in consumers’ lives?”

Gross: This comes up a lot, especially with Millennials growing as an audience of car buyers. When they have children and move to the suburbs, cars become an important part of their lives. Cars are part of the family. Also, think about how much time some people spend in their cars during commutes. It can be significant.

WardsAuto: The second question you reportedly love to be asked is, “How do people find and fall in love with a vehicle?”

Gross: Surprisingly, a lot of people find and fall in love with a vehicle online. Going to the dealership and seeing the vehicle is a confirmation step. For the dealership salesperson, the key is to respect the research the customer has done and confirm the customer’s decision.

Yet, if you run into one of those situations where the customer sees the car and decides it is not quite right, the salesperson should be able to reroute quickly, knowing that customer is ready to purchase. It’s great having a customer ready to go, and your job is to carry them through.

WardsAuto: It’s your sale to lose at that point, right?

WardsAuto: And the third question you love to answer: “How does the consumer balance a budget, functional needs and car-ownership dreams as they make such a major purchase decision?”

Gross: One of the things I used to do when I worked at CarMax is accompany customers in the dealership environment. It’s common that our eyes are bigger than our wallets.

A lot of people shift to CPO (certified pre-owned vehicles). They don’t want to give up the comfort and features, yet don’t need to own the newest vehicle with the latest whiz-bang features.

New Product Aims to Help Car Dealers Get More Clicks on Their Own
Apr 25, 2018