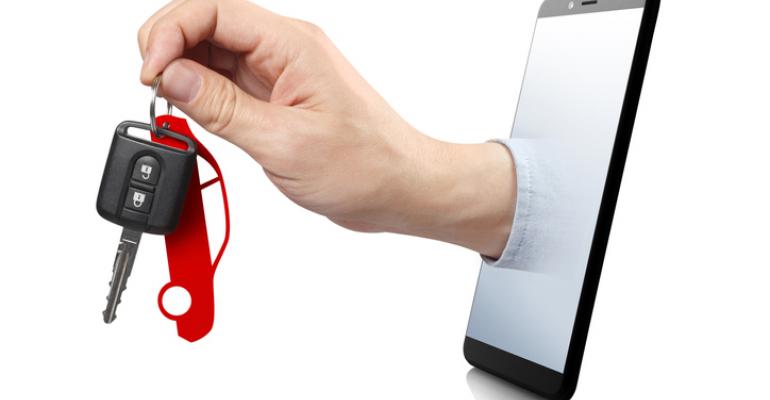 Digital auto retailing has come a long way from when “the notion was that no one would buy a car online,” Cobb says.
Dealers

Car Dealers on One Side, Shoppers on the Other

A so-called “two-sided marketplace” is the digital future of auto retailing, but making it mainstream will require a sizable marketing investment.

that advised Rodo in securing an additional $18 million in capital. Rodo has raised about $45 million in total.

Rodo offers a platform that lets car shoppers and participating dealers do end-to-end vehicle transactions online. Consumers can shop and cross-shop from a large collective multi-brand inventory, rather than from an individual store’s stock.

It’s akin to how the retail giant Amazon connects buyers to sellers. It departs from the business model of forwarding sales leads to individual dealers.

While gross profit per unit may decline, per-unit net profit potentially increases due to reduced operating costs, such as payroll, he says. “Personnel represents a lot of the costs of the (traditional) dealership model.”

The old saying is that if you build it, they will come. But first they have to know about it.

Consequently, among the challenges of a nascent automotive two-sided marketplace is telling people it exists, says Cobb, whose bank specialize in mergers, acquisitions, investments and raising capital in the automotive retail and consumer mobility sectors.

“You need to spend a lot of time, effort and money in educating the public,” he says of getting the word out about the new level of digital auto retailing.

“It will take a lot of marketing money,” he adds. “You’ve got to build trust that people will have a great experience. Both sides have to feel that way.”

Presumably, any buyer-seller marketplace is two-sided. But it’s changed in auto retailing since pre-Internet times. Before, a car buyer had little information (especially regarding competitive pricing) to work with, whereas the seller possessed much more, using it advantageously. It was a one-sided, or at least lopsided, marketplace. Today, digital research empowers car shoppers.

Some dealers may express skepticism toward a business model that could relegate their stores to the role of order-fulfillment centers. But Cobb and Keith Style, Presidio’s head of auto retail services, seek to assuage dealer apprehensions.

“We’re dealer-centric,” Cobb says. “Our clients are dealers. We think this is better for dealers.” Yet it will require “a big behavior modification” for some.

Style notes the no-negotiation system comes with price parameters set by dealers themselves. (TrueCar is preparing to regionally roll out a similar platform, called TrueCar+.)

“We are dealer-friendly,” Style says. “We’ve talked extensively about what are the pressure points for dealers. This is like a two-sided barbell. It’s got to be evenly weighted on both ends.”

Investors in Rodo include Holman Strategic Ventures that is associated with Holman Automotive, one of the largest privately-owned dealership groups in the U.S., with 40 stores representing 20 brands.

“The ultimate answer for market-based transactions online is a true marketplace ultimately with millions of consumers on one side and millions of vehicles on the other side,” says Holman Strategic Ventures President and CEO Bill Cariss.

Digital auto retailing continues to grow and evolve from the days when “the notion was that no one would buy a car online,” Cobb says.