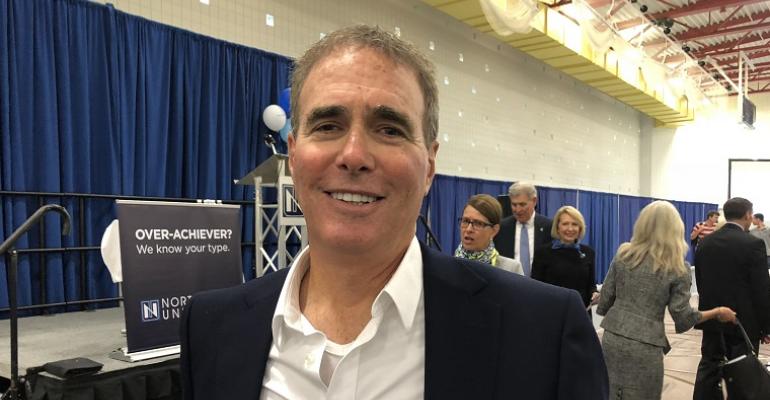 “I never imagined that in this late stage of my career I’m telling dealers, ‘You know that way I told you to do it? Stop doing it,’” Pollak says. He's pictured here at Northwood University in Midland, MI.
Dealers

In a new book, Dale Pollak asks auto retailers to reconsider what he once told them to do.

SOUTHFIELD, MI – Fifteen years ago, Dale Pollak, who is considered something of an auto-retailing visionary, revolutionized the used-car market by proselytizing a new philosophy of “velocity selling.”

Its premise: In the age of the Internet and price transparency, dealers could no longer price inventory high and wait for an unsuspecting consumer to overpay.

Instead, Pollak, a former second-generation dealer and founder of software provider vAuto, urged dealers to use inventory-management systems to price vehicles competitively and consequently sell more of them. The idea was that used-car departments ultimately would make more money hitting lots of singles and doubles rather than the occasional home run.

But after considerable thought and number-crunching, Pollak now says velocity selling no longer is the way to go. His new theory essentially contradicts it.

He writes about his recalibrated thinking in a new book (his fifth), “Gross Deception: A tale of shifting markets, shrinking margins and new truth of used-car profitability.”

At Wards offices here, Pollak talks about the book, the widespread errors of used-car pricing and his frustration in trying to gain converts among dealers.

Wards: The book title seems intriguing. You say your goal or mission is to get dealers out of a gross-deception rut. Talk about that.

Pollak: The book highlights assumptions dealers had that once were valid. Today, they are antithetical to profitable operations. Many of the new truths of used-car profitability have to do with perceptions about making gross profits. Hence, the book title.

Wards: Are dealers responsible for or victims of this gross deception?

Pollak: I’m not sure they are either. But the used-car management playbook has been pretty much the same for the past 100 years, with some modifications. 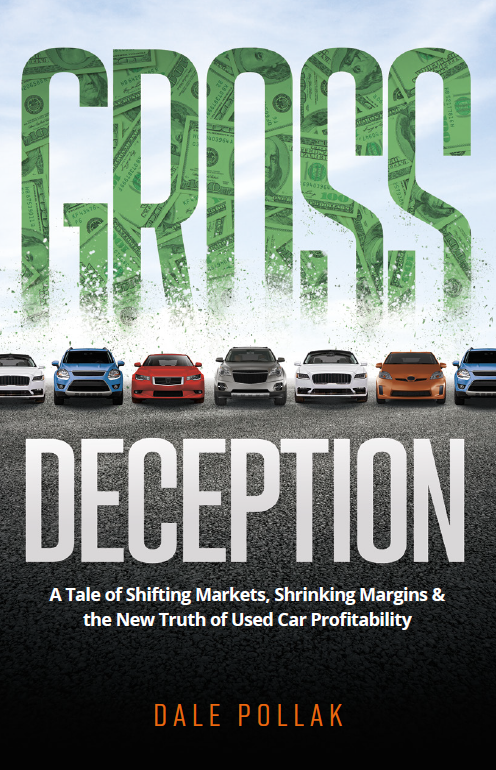 Pollak: It’s a set of beliefs about what constitutes profitable used-car operations. It’s been around a while.

The used-vehicle environment took a fundamental change at the beginning of this century with the rising popularity of the Internet.

But there was a fundamental transformation that occurred about three years ago. It went virtually unnoticed yet has profound implications to dealer profitability.

Wards: What was it?

Pollak: It was no secret margins were compressing. It was an inevitability of a more transparent marketplace. But in spring of 2016, the rate of margin compression suddenly escalated. Before, 60 days was the maximum time you’d want to hold a car. Today, 30 is the new 60.

It’s the new math. The monster itself is scary. What’s scarier is the monster is out there and so many people don’t even know it. (Cover of Dale Pollak's new book)

Wards: If it goes from 60 to 30 days, is that because the dealer’s cost of ownership is increasing?

Pollak: What the dealer paid for the car didn’t change over that period. What did change is the average market asking price. It comes down every day. The rate of that has accelerated. Customers don’t typically come in and pay asking prices. They usually ask for and get a discount.

The National Automobile Dealers Assn. publishes a dealer health report. I looked at the 2017 average net profit for used units sold across America. I thought it was a mistake. It was -$2. We saw net profit for new units go negative years ago. I never thought I’d see that happen to used vehicles.

In a record volume year, about half of dealers lost money in the used-car department. And it was going down for the ones that were making money.

I write in this book what’s wrong and what to do about it.

Pollak: The basic formula has broken down. It’s to sell as many cars as you can as fast as you can to generate the maximum total gross to cover your expenses. But at some point, the average profit per unit sold has become so low, you simply can’t make it up with more volume. There’s not enough volume out there to do that.

For example, the Northeast is hyper-competitive with lots of dealers and a high cost of business. Those are the dealers who are losing money.

Pollak: By mid-2016, most dealers understood the used-car business was an Internet business and volume is driven by price. It became lower price, lower price; a race to the bottom. Volume remains part of the basic dealer playbook today.

What’s the solution? In the book I have two prescriptions but it’s difficult for many dealers to take the medicine.

You have to track your rolling 30-day used retail sales. Tomorrow we drop off the 31st day and add today. Reconcile that rolling total to the number of vehicles we stock. It balances the equation.

When I tell dealers they should only stock the number of vehicles they’ve sold in the last 30 days, it is a shocker. Their assumption is they’d sell fewer cars. Which is not necessarily true.

Some dealers do get it. Bill Knight, a dealer in Oklahoma, is one of them. He runs three Ford stores with that balanced equation, where the inventory matches the 30-day sales.

At his big store in Tulsa, he sold fewer cars but made more profit. It’s antithetical to the belief system of virtually every dealer who believe the way to grow business is to stock more cars than you sell.

That was fine when the math was different. Today, if you stock 150 and sell 75, those ones you didn’t sell quickly are going to transact. But more likely than not, they’ll be net-profit losers. The new math doesn’t support stocking ahead of your sales.

You no longer stock cars to sell cars. Now, you sell cars to earn the right to stock cars. It’s a fundamental shift.

Wards: It sure is.

Pollak: To grow your business, let’s talk about an optimal pricing plan. Let’s talk about selling the right cars. Let’s talk about the speed and efficiency of reconditioning. The efficacy of a marketing plan. The in-store customer experience. Admittedly, none of those is easier than just putting more cars out there. But that doesn’t work anymore. Operational inefficiencies are the profit drainers.

Wards: Some dealers will proudly market their inventory as the largest selection in town.

Pollak: Yes, you have to do volume, but you’ll lose money if you don’t do it smart.

Pollak: I was the guy who 15 years ago said to the industry, there’s a better way to do it. Everyone was focused on maximizing gross profit. I said to let the average transaction profit slip because you’ll do more volume and ultimately generate more gross.

It was called velocity management. I never imagined that in this late stage of my career I’m telling dealers, “You know that way I told you to do it? Stop doing it.”

Wards: Stop because times have changed.

Pollak: Thank you. It’s not that I was wrong. Velocity management has made a lot of people make a lot of money. But things change, and we must change with them.

Today, you need to stop managing inventory as merchandise. Instead, manage inventory as investments. Manage it like a prudent investor would.

To achieve good ROI on a vehicle, there are three factors. First, how “right” do you own it. Do you own it for too much money or below market?

The second factor that reflects a vehicle’s ROI potential is market supply. Does it have low supply and high demand? Third, is it a high or low retail-volume car?

We’ve mashed those three together to score vehicles one to 12. The ones with the highest ROI potential are called platinum, followed by gold, silver and bronze.

The highest score, 12, means you own it cheap, you’re in it right, it has a high demand and short supply in the market, a low days’ supply and it’s a high retail volume car. A vehicle scoring 1 would be the opposite.

Yet, our national-composite data indicates dealers price their lowest-ROI vehicles like they are the ones they’re most proud of.

The ones with the highest ROI potential are priced like distressed merchandise. It’s an inverted pricing potential that sub-optimizes returns on used-vehicle investments.

There was a moment in my journey that I knew beyond a doubt we were going to change the industry. The moment came when my data scientists told me there’s not a single dealer who doesn’t have an inverted pricing profile. Not one. It’s 100% opposite of what a prudent investor would do.

Then you wonder why you are losing money.

Wards: Why would someone do that, then?

Pollak: That’s the question. Why would anyone do it, let alone 100%. We found a hole in the used-car universe. Dealers use an ancient technology called a calendar to price vehicles. The flawed assumption is that the number of days a dealer holds a vehicle affects the profit potential.

It reflects the hyper-competitive nature of today’s wholesale market. What auction are you going to go to where you find that (platinum) car? How often do you buy a trade-in on the cheap? That seldom happens today.

Don’t make decisions on calendar time. Make them on profit time. The few dealers who have done that have seen reversals of losses. They’ve solved that irrational pricing problem that happens so often. Our Profit Time software is just a tool. This is a change of philosophy. I’m not here to sell software.

Wards: In a perfect world, every car would be platinum or at least gold. What happens to the silver and bronze cars? They’d still be there but priced accordingly.

Wards: So, you don’t recommend dealers only buy platinum and gold.

Pollak: No, that’s impossible. You can’t remold the market. The market is the market. You just have to do the best you can. But make peace with the frigging truth.

Wards: I sense a frustration on your part that there aren’t a lot of converts at this point.

Pollak: This is like the experience I had 15 years ago (touting velocity management). I never thought that in this late stage of my career it would be like starting over again.

Now it’s tougher. I’m telling them it’s time to do it differently. And they’re saying, “But you were the guy who told us to do it this way.” It’s true. I was.

Wards: But the proviso is you were operating under the circumstances of the time back then.

Wards: Do you think it’s just a matter of time before people get what you are saying?

Pollak: Yes. People don’t do things differently unless they feel the need. They need to get there at their own pace. Right now, I need megaphones to get people to start talking about it. Discussion leads to recognition.

Wards: Is it like a rehab program where you have to hit rock bottom before changing your ways?

Wards: Did you do well at math as a kid?

Wards: With your focus on numbers, I figured you'd have been in advanced-placement math.

Pollak: This is basic math. But I do excel at logic. I graduated (at DePaul University) No.1 in my law school class, which is just an exercise in logic. And I’m a learner, a student.