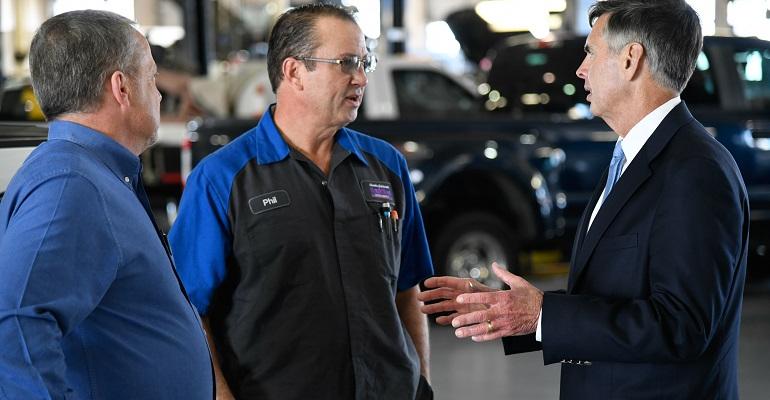 “Because of the family atmosphere dealerships provide, it’s the only place to work,” says Gilchrist, right, talking to staffers at one of his Texas dealerships.
Dealers

Car dealers – anxious to replenish a dwindling auto-technician workforce – are among other things trying to recast the public image of auto mechanics as well-paid, well-trained, computer-savvy professionals.

The auto-retailing industry is facing a critical shortage of service technicians, a problem that will worsen in coming years if not addressed, says the National Automobile Dealers Assn.

“We’re working hard on this,” says NADA 2019 Chairman Charlie Gilchrist, a Texas dealer. “The tech shortage is a serious issue, not only for dealers but for OEMs. Older techs are retiring, and we need to bring in new people.”

America’s technical colleges and training programs graduate about 37,000 auto mechanics a year. Yet the industry needs to replace roughly 76,000 technicians annually to keep pace with retirements and new jobs in the sector, NADA says.

The trade association and similar groups have launched initiatives to ease the shortage, but “we’ve a long way to go,” Gilchrist says during an appearance at an Automotive Press Assn. gathering in Detroit.

Among the projects is the NADA Foundation’s Workforce Initiative. It aims to promote the benefits of auto technician work and make it easier, digitally and otherwise, for interested persons to learn about local training opportunities.

“We need an initiative the entire auto industry can get behind,” Gilchrist says.

Efforts also are under way to reach out to high schoolers and even middle schoolers to whet their interest in such work. NADA says the average U.S. dealership technician earns more than $61,000 a year and experienced mechanics can make more than $100,000 annually.

Some local dealership groups, such as the Greater New York Automobile Dealers Assn., have established their own regional training center. Other dealer associations have partnered with local community colleges to offer auto-tech training.

Some programs not only seek to reach students but also their parents. Children may not listen when their parents tell them to clean their room, but many young people heed parental career advice.

The recruiting efforts try to convey the message that the days of the “grease monkey” or backyard mechanic are over because vehicles now are so advanced.

“As vehicles become more technically driven, we need younger minds to service them,” Gilchrist says. “It used to be a greasy job. People got their hands dirty. Now it’s high-tech and high-paying. Our job is to let people know how wonderful it is to work at a dealership. I don’t think we’ve done that in the past.”

Asked to describe the wonders of dealership work, he tells Wards:

“We try real hard to make sure our people know how much we care about them. If we do, they’ll care about customers.

“We’re trying to change up, so we have flexible scheduling, allowing people to have time off when they need it.

“To me, because of the family atmosphere dealerships provide, it’s the only place to work. It’s an exciting business. It’s incredible. And dealing with people and customers is fascinating.”

Then there are the occasional car-lot barbecues. “That too,” Gilchrist says. “We do a lot of fun things.”

Sponsored Content
eBook: 16 Rules and Regulations Your F&I Department is On the Hook For
Dec 03, 2020