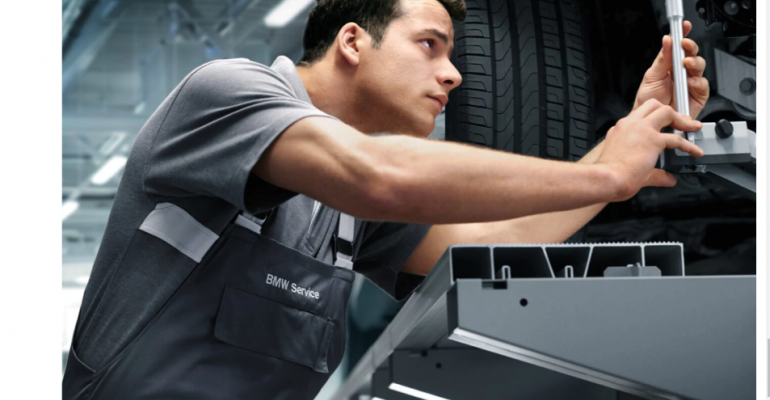 Since 2019 the military training program has graduated 106 rookie BMW technicians nationwide. Dealerships need about 76,000 new technicians annually due to retirements and job departures, but only about 39,000 service techs graduate from tech schools.

The first class has graduated from the East Coast version of the 16-week BMW Military Service Technician Education Program, part of an industrywide effort to keep up with the urgent demand for automotive technicians.

The newest version of the BMW program trains military service members at Fort Bragg, NC, a U.S. Army base, starting shortly before discharge, and helps them find civilian jobs as technicians at U.S. BMW dealerships.

BMW of North America LLC and Universal Technical Institute, which performs the actual training, initially launched the BMW military training program in 2018 on the West Coast. That was at Camp Pendleton, a U.S. Marine Corps base in Southern California. The first class there graduated in 2019.

Around the country, lots of technician training programs recruit ex-military trainees. What distinguishes the BMW program is that classes are offered directly on the U.S. military bases, according to BMW of North America.

With permission from their commanding officers, participants can even complete the program while still on active duty, BMW says.

The BMW Military STEP program is open to military members whose honorable-discharge date falls within six months of a class start date, the company says.

Preference is given to candidates with a relevant military specialty, like wheeled-vehicle mechanics, technology, or avionics, or who have other prior experience as an automotive technician.

BMW says its U.S. retail channel, with 350 dealerships, has a total of more than 7,000 technicians. But like the rest of the auto retail industry, new technicians are in big demand because of turnover, and because Fixed Operations is so important to overall dealership profitability.

That’s about 29% of the total number of U.S. technicians needed to replace those who quit or retire every year. As units in operation increase, that also generates even more demand for technicians, the dealer association says.

Uyematsu says historically, BMW’s technician turnover rate in the U.S. market is just under 20% on average. But he says there’s been a slight uptick since the COVID-19 pandemic, to just over 20%.

While the military pipeline is relatively new, the BMW-sponsored Service Technician Education Program has been around since 1987, he says. In the years since, the company has helped train and place at dealerships a total of more than 7,500 new technicians, Uyematsu says. He says about 49% of the alumni are still working at BMW dealerships.