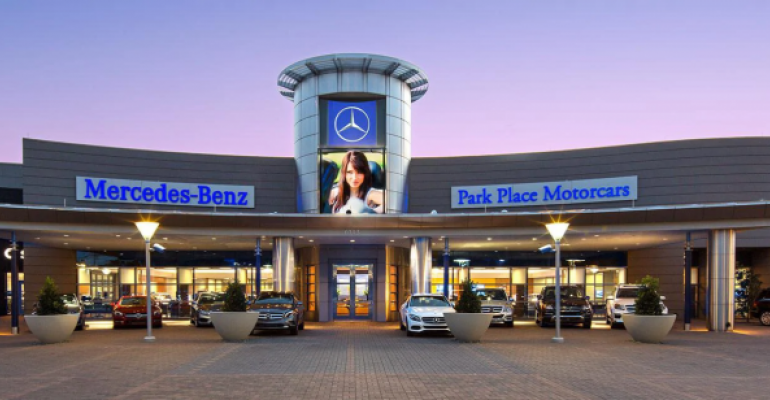 Park Place Dealerships
This Mercedes-Benz store is part of the revised deal.
Dealers

The former and current deals are “apples and oranges,” because of the real estate, says Erin Kerrigan of Kerrigan Advisors.

Asbury Automotive Group revives but revises its acquisition of most of Dallas-based Park Place Dealerships for $735 million.

It’s a scaled-down version of a more-encompassing $1 billion deal announced in December, before the pandemic hit the U.S., then nixed because of it.

Duluth, GA-based Asbury canceled the original deal in March shortly before the expected closing, citing uncertainty brought on by business shutdowns – including dealerships – aimed at limiting the spread of the coronavirus.

Publicly owned Asbury, ranked No.7 on the 2020 Wards Megadealer 100 with total 2019 revenue of $7.2 billion, says it reconsidered since auto sales bounced back after April.

The new transaction includes 12 new-vehicle franchises: three each for Mercedes-Benz and Sprinter van, two for Lexus, and one each for Jaguar, Land Rover, Porsche, and Volvo.

The canceled original deal had involved 19 franchises, including five ultra-luxury brands: Bentley, Rolls-Royce, McLaren, Maserati and Karma, plus an open point for Jaguar-Land Rover. The exotics and the open point are no longer part of the deal.

The original, $1 billion purchase price also included $215 million for real estate. Under the new transaction, Asbury says it will lease the land “under favorable terms with purchase options.”

The former and current deals are “apples and oranges,” because of the real estate, says Erin Kerrigan, founder and managing director of Kerrigan Advisors, Irvine, CA.

George Karolis, president of The Presidio Group, a San Francisco-based investment bank that advised the seller, says, “The majority of the difference relates to the exclusion of two dealerships and certain properties being leased instead of purchased upfront.”

Asbury says the new purchase represents about $1.7 billion in expected annualized revenue. That’s down from about $1.9 billion for the original deal.

The new purchase price also reflects a multiple of 7.7 times a target of annual earnings before interest, taxes, depreciation and amortization of $95 million, Asbury says. The original deal reflected a multiple of 10 times EBITDA of $100 million, it says.