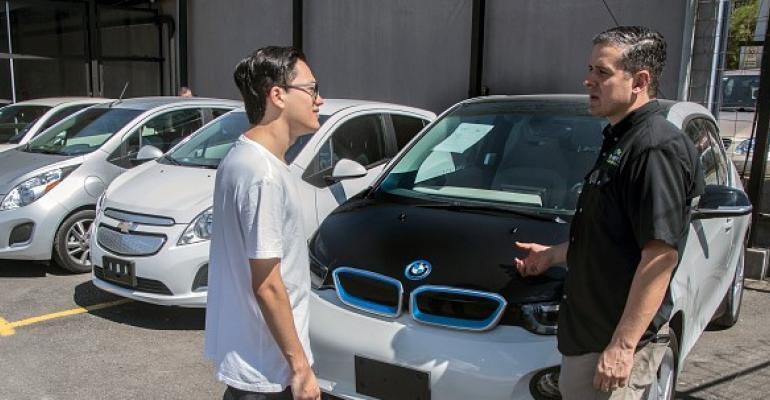 Analysts worry about resurgence of COVID-19 cases and effect on demand.
Dealers

J.D. Power’s Tyson Jominy says a lack of new-vehicle inventory is the biggest factor holding back sales, while Cox Automotive’s Charlie Chesbrough worries about consumer willingness and ability to buy.

Analysts for J.D. Power and Cox Automotive offer contrasting takes on U.S. auto sales for the rest of 2020, one more optimistic and one more pessimistic, in separate webinar presentations.

The optimist is Tyson Jominy, J.D. Power vice president-data & analytics. During a webinar hosted by The Wall Street Journal, Jominy says a lack of new-vehicle inventory is the biggest factor holding back sales.

He acknowledges an increase in subprime delinquencies but says auto lenders are not “stacking” risk as they had in the run-up to the Great Recession, for instance by offering long loans to subprime customers with large amounts of negative equity.

Provided automakers can ramp up production to meet demand in the fourth quarter, Jominy says sales have “a shot to get back to zero.” That is, zero percent change in monthly sales from a year ago by the end of 2020.

The pessimist is Charlie Chesbrough, senior economist for Cox Automotive. He’s more worried about consumer willingness and ability to buy. During a webinar hosted by the American International Dealers Association, Chesbrough says business shutdowns and job losses this year have damaged the U.S. economy and consumer confidence so badly it could be three or four years before auto sales recover to pre-pandemic levels.

“The key takeaway is, we’re still in a very, very difficult position economically,” Chesbrough says. “The idea was, even though tens of millions of people were losing their jobs, the hope was that once everything opened back up again, all these jobs would be reopened, too, and everybody would get back to work.”

Since then, businesses are running more efficiently with fewer people, less office space and less travel. Meanwhile, Wall Street is applauding the trend with higher stock values, he says. “What we’re concerned with now, is if all these furloughed employees are going to become permanent layoffs.”

But both analysts concur on many points, too. They agree lease customers who have been extending their leases during the pandemic represent additional pent-up demand, when they eventually return to the market.

And both worry about the potential for a “W-shaped” recovery. That is, an uptick in COVID-19 cases could cause a repeat of widespread business shutdowns. Jominy calls that scenario “the elephant in the room.” But he also argues businesses can recover more quickly because of their prior experience.