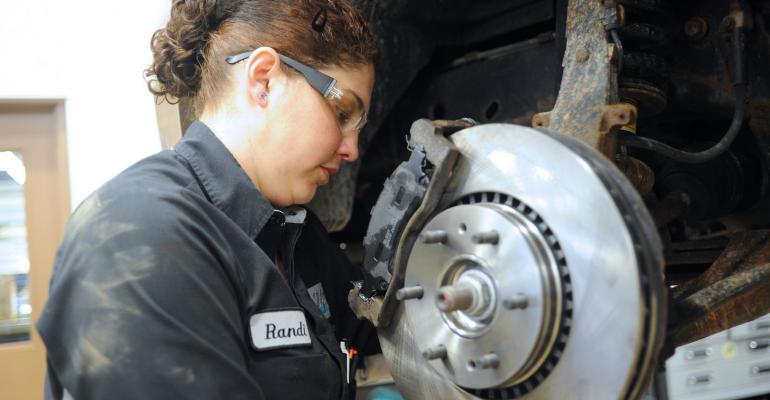 She heads the General Motors Women’s Retail Network, an initiative that encourages women to seek dealership careers. Since 2011, the project has awarded about $100,000 in “Drive to Succeed” scholarships to women.

Half of last year’s recipients wanted to work in service departments. “That surprised me,” Briggs says.

They include Sara Landry of Bay City, MI, a graduate of Northwood University in Midland, MI, who now works as an assistant service manager at a Michigan store. Her ultimate goal is to become a GM dealer principal.

Another scholarship went to Sheryl Sickels of Adrian, MO, who spent 20 years in the U.S. Air Force. She now works as an auto technician for AutoNation, the country’s largest dealership chain.

The women’s outreach program included a group tour of Detroit/Hamtramck Assembly, where the Chevrolet Volt is produced. The plant manager is a woman. “A tour participant saw that, and it helped her decide to go back to school to become a service director,” Briggs says at the Automotive Retail Network conference here.

An industry first, the program has grown and helps to increase the number of women qualified to enter auto retailing, including positions in sales, marketing, management and technical fields, Briggs says.

Dealerships have traditionally employed many more men than women.

A National Automobile Dealers Assn.-commissioned survey indicates 92% of dealership office and administration workers are women, but females account for only 19% of F&I positions. That’s better than women in parts and service (13%), vehicle sales (9%) and sales management (4%).

“We want to change the culture of dealerships by attracting women to dealership jobs and all aspects of management,” Briggs says. “We want to get more women involved, from technicians to people on the sales floor. We’re doing what we can to attract women to auto careers.”

She strives to “create more gender balance in the auto retail environment.” As consumers, women are involved in about 85% of car buying decisions, she says, adding that women spend about $200 billion on auto service work, and 65% of that is done at dealerships

The number of female dealership principals is increasing, in part due to initiatives such as the GM Women’s Retail Network, but also because of dealership succession at family-owned stores.

“This effort has expanded and become more inclusive,” Briggs says of the program she heads. “Women with various experiences and interests are welcome. Our candidates reflect the diversity of our female customers, which is a key to the program’s success.”