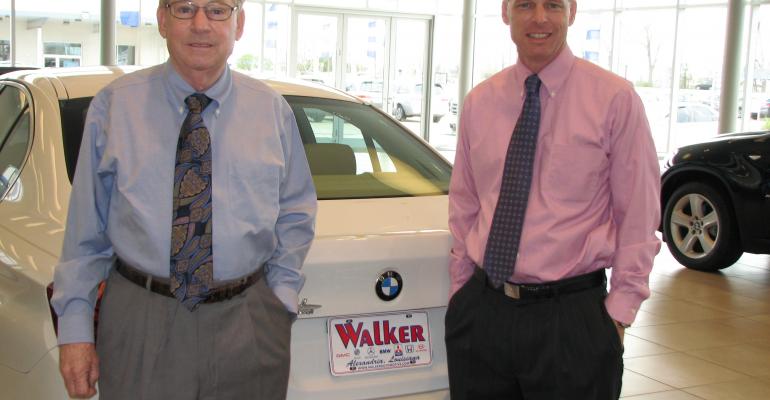 Alexandria, LA, is a relatively small town. But the opportunity to run a successful dealership there is larger than it appears, to paraphrase wording on side-view mirrors.

The town’s strategic location in the middle of the Pelican state attracts more than its share of business for the fourth-generation 10-franchise Walker Automotive dealership group.

“We’re able to benefit from a lot of (people from) the surrounding towns that come to Alexandria for health care and shopping they can’t do in smaller towns” says Lawrence Searcy Jr., the group’s operations manager and general counsel.

In 1919, World War I veteran W. Foster Walker, Sr. purchased the assets of Alexandria Auto Co. and began selling Durant and REO automobiles. He received an Oldsmobile franchise in 1929. He renamed the store Walker Oldsmobile in 1966. The dealership sold Oldsmobiles until General Motors shuttered the division in 2004.

But that didn’t leave Walker high and dry. Since 1974, the group has added Mercedes-Benz, Buick-GMC, Mitsubishi, Kia, Honda, Toyota, Scion and BMW franchises.

It acquired Toyota and Chrysler/Dodge/Jeep/Ram franchises in 2014 from Baton Rouge-based All Star Automotive.

On the losing side, Walker also operated Daewoo, Pontiac and Saturn stores.

“Foster Walker III realized early on that the more points you have, the better the opportunity to maximize your efficiencies and build your market share,” Searcy says. Walker, 71, the founder’s grandson and Searcy’s father-in-law, is president and CEO. Foster Walker IV works at the Honda store.

While many dealers want to branch out geographically, Walker is staying put.

“We want to remain here in our local market,” Searcy says. “We’ve looked at other opportunities and decided this is the market we know. It’s where we want to be. The best opportunity for growth and success is hands-on management. We wouldn’t have that opportunity if we went somewhere far away from here.”

Forbes identified Alexandria, with a 5.2% unemployment rate and median home cost of $124,800, as one of the top three places to retire in 2013. Sperling’s Best Places predicts the city’s rate of job growth will top 35% over the next 10 years.

“Our economy remains in a pattern of slow but steady growth,” Searcy says. “While other areas experienced tremendous downturns in 2009 and 2010, we saw some slowdown but not to the extent that most people saw nationally.

“On the other hand, we haven’t seen the spike in growth that everybody else has seen. Our sales and grosses have gone up year over year following our regional trend. Slow and steady wins the race.”

Staying local not only allows Walker III and his management team to be involved in the everyday running of the business. It also helps employee retention.

“Mr. Walker visits every store every day, not just as one of those owners that make a pass through,” Searcy says. “He’s still opening every bit of mail and is the leader of the group.

“Our managers respect his style and the way he does business. My general sales manager and used car manager have been here 25 years. That is a direct result of Mr. Walker’s style of management. When we recruit, people see that we look for long-term employees, and there’s a real opportunity to grow and earn very good income.”

“Employees are comfortable their jobs are going to be perpetuated through the next generation,” Searcy says. “They’re not worried if the store’s going to be sold or if the owner is going to be gone.”

Walker Automotive is a two-time winner of the Better Business Bureau’s International Torch Award that recognizes ethics in business and a commitment to exceptional standards.

The company attributes this to “The Walker Way,” a customer-focused management philosophy that applies to all aspects of the business.

“We’ve put the Reynolds and Reynolds docuPAD in every store,” Searcy says of modern technology in the finance and insurance office. “The customer has a (stylus) and they have to consent to and acknowledge every step of the process. There’s no way to have any hidden fees or charges or products.”

A dress code promotes professionalism, he says “Everyone in our store wears a tie. We don’t allow jeans. We believe if you dress and act like a professional, customers will respond to being treated professionally.”

Timber and health care are among Alexandria’s major industries, but the largest employer is nearby Fort Polk, the U.S. Army’s Joint Readiness Training Center, with 49,000 military and civilian personnel and a $1.7 billion economic impact in the region.

While Walker does not bid on government vehicle contracts and the Louisiana Automobile Dealers Assn. prohibits dealers from remote selling, the group benefits from its proximity to the base.

“One of our employees is a Navy veteran who has forged a very close relationship with the brass,” Searcy says. “He represents us at golf tournaments, welcome-home ceremonies and other base events. The active military at Fort Polk as well as retired service people who’ve stayed in the area are a big part of our customer base.”

Walker completed the first phase of a Buick-GMC facility image program in 2008. Phase two is currently under way. Mercedes-Benz and BMW facilities were renovated in 2011. The dealership group allows free use of its facilities for certain community events.

“My wife and mother are breast cancer survivors, so we are very involved with the Susan G. Komen Race for the Cure,” Searcy says. “We technically cannot sponsor that event because Ford has sponsorship exclusivity, so instead we try to give back by allowing those types of groups to use the Mercedes and BMW facilities for meetings or fundraisers.

“They are beautiful stores and it brings the general public into the building where they can mingle among the cars.”

“We are honored to have (Walker Automotive) involved with our program.”

While Walker’s sales growth has been steady, the group has recognized the need to  improve its business processes.

Preoccupied with shoring up sales and retaining employees during the recession, the group “let the fixed operations side run on autopilot a little bit,” Searcy says.

Now, the back shop is getting more attention. So is the art of communicating.

“Beginning in 2013, we began meeting in high-performance teams to re-analyze every aspect of our group operations, from how we communicate with each other to processes for sales, negotiation, and the first-service visit,” Searcy says. “We began to get input as to why they were or were not working.”

A takeaway was realizing employees communicated differently. Moreover, people often misunderstood the importance of what was being said.

“We actually created a very basic communication tree,” Searcy says. “If you need something from somebody else very quickly, you are to either pick up the phone or text them. If you got a text from a manager, you were expected to give a quick result.

“If you needed a somewhat timely result, you could call and leave a voicemail. If you had a little more time, an email would suffice. So when you received that particular communication you would understand its importance. That helped us to communicate between departments much more effectively.”

Another initiative centered on having a written plan, and not assuming every employee understands the business goals.

“We re-visited our mission statement that was written 25 years ago,” Searcy says. “It spoke of the attributes we believed in, which were customer service and profitability, but it didn’t address the concept of growth. We re-wrote the mission statement to include a commitment to customer satisfaction, honesty, integrity, and quality. Then we said success with those would lead to additional profits and growth and economic opportunities."

The soul searching that went with re-defining the mission and vision statements was an important part of the process, he says.