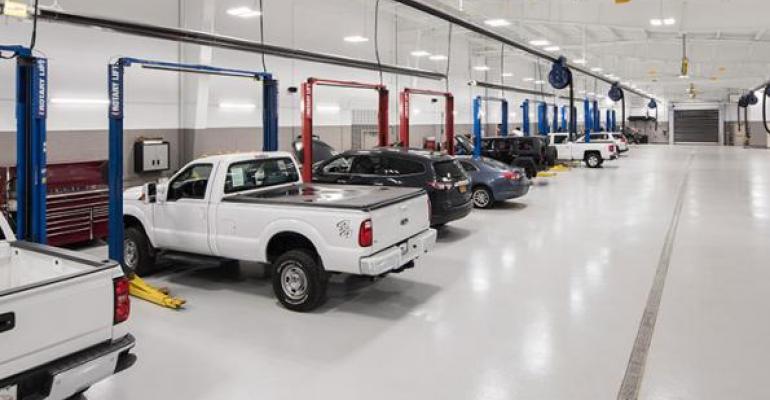 More dealership groups are establishing standalone used-car stores to boost their pre-owned sales. While there are synergies between the new and used stores, some say too closely intertwining the two operations can be dangerous.

Used cars accounted for more than 80% of 2017 unit sales at Sun Auto Group in mid-New York state. While Sun Chevrolet, the group’s new-car dealership, contributed to that number, the majority of the pre-owned sales were through the group’s two standalone Used Car King dealerships.

New-car dealerships have long sold used units along with new. Now, however, more dealership groups are establishing standalone used-car stores to boost their pre-owned sales. While there are synergies between the new and used stores, some say intertwining the two operations can be dangerous.

Caputo opened the first Used Car King store in 2005 in Cicero, NY.  He already had branded used-car sales at his Chevrolet store as Used Car King. The Chevrolet dealership is in Chittenango, NY.

The fact that he was an established Chevrolet dealer when he opened the Used Car King stores allows him to buy inventory at closed franchise auctions, Caputo says. He also could acquire financing through his existing bank relationships. He uses the same suppliers for parts, health insurance, tool and chemical purchases.

“I call it a cluster,” Caputo says.

All three stores use the same dealer management system, so he can move employees from between stores, he adds.

Caputo hopes to expand the Used Car King brand regionally, or even nationally.

A “massive surge” of off-lease units will propel the used-car market this year, says Zohaib Rahim, research manager-industry insights at Cox Automotive. Many of those units will be SUVs, pickups or CUVs, the most popular models these days. That will make the used segment attractive to buyers who only considered new cars in the past, he says.

“If interest rates continue to rise, (and there is) any credit tightening, you will for sure see people drive into the used-vehicle market,” Rahim says.

Sonic Automotive sees huge opportunity in the used segment. The publicly listed dealership group in 2014 established EchoPark, a standalone chain of used-car stores. Today it has six EchoPark locations in the Denver area and two in San Antonio, TX.  Within a few years that number will rise to 100, says Jeff Dyke, executive vice president-operations.

“I think our pre-owned business will at some time really dwarf our new-car business in terms of profit and revenues,” he says. Sonic is No.4 on the WardsAuto Megadealer 100.

But, aside from a DMS and some executives, the Sonic and EchoPark store operations share no resources, not even inventory, Dyke and Smith both emphasize.

“Our pre-owned dealership EchoPark is a total standalone entity,” Dyke says. “We built it so it could live and breathe all by itself.”

EchoPark gets its inventory from buying used cars directly from consumers and at auction. Its link to Sonic gives EchoPark access to the manufacturers’ auctions.

Sonic executives are adamant the two business entities do not share personnel. The human resources “devoted to the franchise business is really a full-time job,” says Smith. “We didn’t want to detract from selling new cars.”

Another reason for the wall between Sonic and EchoPark are lessons Dyke learned during a stint at AutoNation. He was there when the group first tried to launch a standalone chain of used car mega-stores.

That effort ended in 1999, when Mike Jackson became CEO of AutoNation and closed or converted to new-car dealerships all 29 of the used-car mega-stores. AutoNation recently revived the AutoNation USA name for a new chain of used-only stores.

One reason that original effort failed, Dyke says, was the “cross-functionality” between the two stores. “The cultures were so different. I think that hurt,” he says, adding profits and losses at the mega-used-car stores were hard to control.

Franchised new-car stores have a multitude of revenue streams including new- and used-car sales, F&I and fixed operations, including customer pay, warranty and parts service, he says.

A standalone used-car store lacks the manufacturer’s warranty work, among other differences. “You have to have a huge revenue stream from used cars and F&I,” Dyke says.

Caputo is undaunted by such hurdles. At Used Car King, “We have a pretty steady customer pay business,” he says. About half of his customers purchase an extended service contract, and he also sells vehicle protection and reinsurance products.

Caputo recently built a new facility for the Cicero location.  The look is one of a luxury new-car dealership, including a spotless 25-bay service area, an airy showroom with room for 20 units, a playroom for children, a coffee bar and fireplace.

Caputo doesn’t see a huge difference between his new- and used-car dealerships. The used-car operational differences are positives, he says, including no stair-step incentive program, no image programs, no special tools in the service area and freedom to purchase parts anywhere.

As for dealership culture, it comes down to the management team and common processes, Caputo says.

“The same kind of person would work at Used Car King as at a new-car dealership,” he says. “They already understand the expectations.”