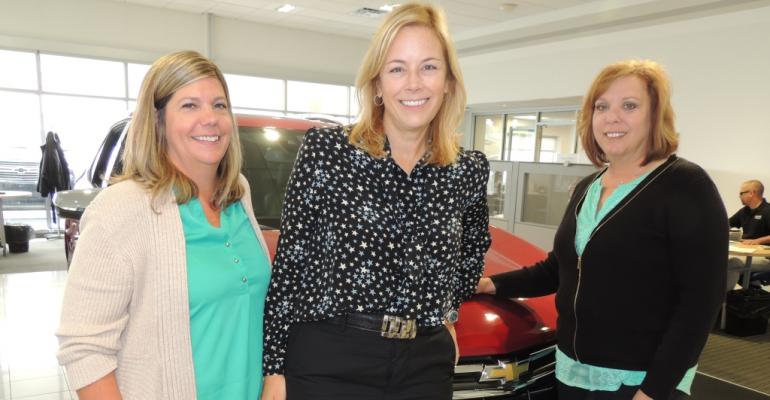 &ldquo;It is unusual, but I don&rsquo;t want to leave out that we have some really strong men in management positions,&rdquo; says dealer principal Katie Bowman Coleman.

CLARKSTON, MI – Males dominate the car dealership world, but the management of John Bowman Chevrolet here is a standout exception.

Katie Bowman Coleman is the dealership principal. Her general manager and service manager are women, too.

“It is unusual,” Coleman tells WardsAuto. “But I don’t want to leave out that we have some really strong men in management positions, including two sales managers. I don’t want someone feeling only a woman can get to top management here. That’s not true.”

The fact that she is the dealer, Rhonda Jensen the general manager and Judy Simpson the service manager “happened in very organic way; it wasn’t by design,” Coleman says.

Instead, it’s a case of three competent and committed people coming up through the ranks and putting in their time. “We all worked very hard for our positions,” Jensen says.

After studying communications and graduating from Denison College in Ohio, Coleman went to New York City to work in fashion retailing for Ralph Lauren.

But she got homesick. And her late father, John Bowman, who began the namesake store in 1984, had repeatedly urged her to work for him.

In 1993, “I gave in,” she says. She also returned to school to get a master’s degree in finance and went to the National Automobile Dealers Assn. dealer-training program. She became dealer principal in 2011, a year before her father died.

“I found my passion here,” she says. She describes her father as dynamic and generous to the community. But he was a no-nonsense boss to all who worked for him, including his daughter.

“My dad was tough,” Coleman says. “Looking back, it was not so bad, but at the time it was tough. I had to know my stuff inside and out.”

Jensen says: “He was tough on all of us. If we did something he didn’t think was right, we knew about it. We’re like that today. If an employee isn’t swimming in the right lane, we’ll let them know.”

Jensen has been at the store for more than 25 years. She began at age 17 typing up car deals as a secretary. She soon learned every job in the front office.

“I could get my job done in a half a day, so John Bowman let me sell cars for the other half.” She then became a service advisor. “You were one of the best we ever had,” Coleman tells her.

Before becoming general manager, Jensen also was the store’s assistant service manager, service manager and fixed-operations director. “I still love service,” she says. “In service, I enjoyed solving problems for people. That’s when I realized customer service was my passion.”

Having held an array of jobs at the dealership aids her in her current top-management work, she says. “I’ve touched every department, which helps me as general manager.”

Early in her career, it was “hard convincing co-workers and customers I could help them, or even understand their needs,” Jensen says. “But as women have taken on larger roles and the industry has evolved, gender doesn’t matter. Talented people matter.”

Simpson, the current service manager who supervises 32 employees, has spent nearly 35 years in the industry. Her father was a parts manager at another dealership.

She began her career in accounting at Lunghamer Chevrolet, Bowman Chevrolet’s closest same-brand competitor. Joe Sr. and Mandy Lunghamer are Coleman’s godparents. “And my mom and Mandy have been best friends since high school,” she says. “The families are close, yet the stores compete against each other. Dealers are like that.”

Jensen, the service manager at the time, hired Simpson as Bowman Chevrolet’s warranty manager. “We just clicked,” Simpson says. “I saw where Rhonda was taking the service department, and wanted to be part of that.”

Various initiatives aim to train and recruit more women for work in the auto industry, including auto retailing. “I’ve told my daughters, and my advice to any woman, is that you can do or be anything with hard work and perseverance,” Simpson says.

One of her biggest challenges as a service manager, and an issue for auto retailing at large, is a chronic shortage of qualified service technicians.

“They are hard to find,” Simpson says. “I’m always looking for passionate, talented team members of any gender.”

Although it is overreaching to call women-led Bowman Chevy an oddity, it is unusual. Fewer than 5% (270) of Chevrolet dealer principals are women.

According to NADA’s annual Dealership Workforce Study, women comprise 18.6% of dealership employees. Only 7.8% of women fill key positions, but they hold 89.3% of office and administrative-support jobs, NADA says.

The Bowman dealership has 121 employees and is on track to deliver 3,800 new and 1,200 used vehicles this year. Many of the customers are General Motors’ employees, and leasing accounts for 85% of new-car business.

It is a fast-growing dealership. To abate a space shortage, it recently acquired a nearby Buick GMC store, using that facility for vehicle-inventory storage, among other things. It now also houses Bowman’s body shop.

Coleman attributes much of her store’s success to its devotion to customer service. Even the auto technicians are part of that. “They will come out and spend the extra time talking with customers,” she says. “It goes a long way.”

To her, “Customer service means not jamming a vehicle or a service solution on people. Instead, it is understanding needs and responding to them.”