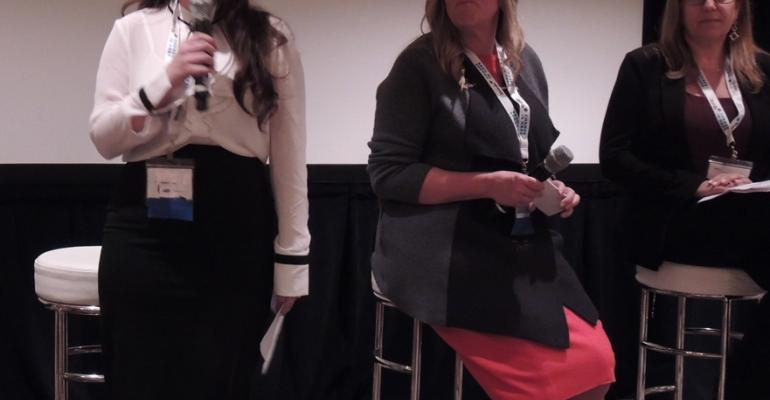 Studies indicate 65% of U.S. car buyers are women, but only 18.6% of car dealership employees are women.

Some car dealerships seeking to hire ambitious people will say in job postings they are looking for “rock stars” and “ninjas.”

Those lively descriptors may resonate with alpha-male go-getters. But they tend to turn off women who might otherwise apply, says Candice Crane, vice president-dealer solutions at Hireology, a talent-search company specializing in auto retailing.

“Get those words out of your job descriptions,” she advises. “Women won’t respond to that. They respond to ‘collaboration,’ ‘autonomy,’ career development’ and ‘empowerment.’”

The latter word particularly is important because “a feeling of empowerment goes a long way, especially when it comes to helping customers,” Crane says at a “Women in Automotive” panel session during a recent DrivingSales Executive Summit.

The panelists say it would behoove dealerships to hire more women, in part because they are so involved in car buying. Studies indicate women buy 65% of U.S. vehicles and overall influence the purchase of 85% of them.

Yet they’re in the minority when it comes to dealership employment, according to the NADA Dealership Workforce Study.

The report says women comprise 18.6% of dealership employees and 20% of all new hires. Only 7.8% of women occupy key positions. In contrast, they make up nearly 90% of the office and administrative-support staff.

Fifteen of 80 employees are women at Knudtsen Chevrolet in Post Falls, ID. Eve Knudtsen is president of the dealership started by her grandfather in 1939. Her brother is a minority partner.

“Inclusiveness didn’t just happen when I took over the dealership,” she says. “You have to make that conscious decision. And it includes training our employees in how to work with women customers.”

Community colleges are a great place to look for “non-traditional hires,” Knudtsen says. “I offer paid internships as well, usually to women.”

She makes a deal with people who hire on with great expectations. “I can’t promise them they’ll all become general sales manager, but I can make this promise: ‘I will get you ready to make that next career move.’”

Diana Kennedy is the general sales manager at Toyota Sunnyvale in Sunnyvale, CA. It’s one of the largest-volume dealerships in northern California. In addition to general sales, she has worked in F&I and Internet sales since beginning her dealership career at age 18.

“I use my success story as an example to others,” she says. I’ve posted on the dealership’s career web page a video of my journey.”

That includes reaching out to people who seem to do their jobs well in various places of employment, says Judy Farcus Serra, who spent 12 years working at two Chevrolet stores before becoming Headquarter’s office manager in 1997. She is now the dealership’s chief financial officer.

“If we see someone who’s impressive while doing their job, we’ll seek to recruit them,” she says. “We’ll slip them a card that says we’re looking for people like them. It’s not a straight job offer.”

But it has led to dealership employment. For instance a server at a sports bar now is a service adviser at Headquarters Toyota. At a sister Mazda store, the current service and parts manager two years ago was waiting on tables.

Knudtsen says she wants her dealership “to become a workplace of choice for women.”

Kennedy adds, “I’m not saying you won’t be successful unless you hire women, but you would be ignoring a lot of quality people who could contribute to your business.”