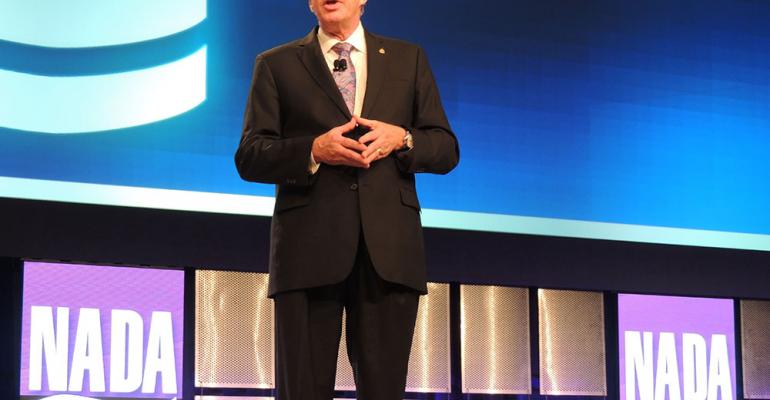 NEW ORLEANS – The last time the National Automobile Dealers Assn. held its annual convention in this city, the nation’s economy and the auto industry were basket cases.

Auto sales in that hard recession year of 2009 would end up at 10.6 million units compared with 16.2 million two years earlier. More than a few conventioneers in 2009 drew connections between battered dealers gathering in a city still recovering from the ravages of 2005’s Hurricane Katrina.

Former U.S. Presidents George H.W. Bush and Bill Clinton spoke to the 2009 NADA convention, telling dealers to hang in there.

Clinton called the recession “the most mind-numbing, complicated economic crisis I’ve ever seen. We need to know how bad it is, but we can’t believe for a second that we can’t get over it”.

His words proved true. The national economy and the auto industry are back up to speed. This year’s convention is as upbeat as ever after 2013 auto sales of 15.5 million units. David Westcott makes note of that in his general-assembly farewell speech as outgoing NADA chairman.

“What a recovery, right?” he says. “What a difference. The automobile industry is back and better than ever. And that's because of the millions of dedicated and hard working men and women in this industry.”

But it’s not all pep rally. Invariably, convention speeches by NADA chairmen get around to what’s bugging dealers the most.

Currently, it is the Consumer Financial Protection Bureau’s efforts to put an end to the indirect-lending practice of dealers adding percentage points to a car-loan rate as compensation for setting it up.

The relatively new federal agency claims an analysis it did shows that giving dealers the discretion to mark up auto financing rates has caused unintended discrimination against some minorities. The bureau has proposed replacing so-called dealer reserve with a flat-fee system or the like.

“Last year, we faced a new threat to dealer-assisted financing and our business model,” Westcott says.

He adds: “If the CFPB gets its way, what happens? Consumers will lose the ability to see if dealers can meet or beat an offer from their own bank. This will harm competition. This will harm customers. And the customers who will suffer the most are those who have the least.”

Westcott urges dealers and their state associations to keep pressing members of Congress on the issue.

“Our message is simple,” he says. “The CFPB’s effort to coerce the industry into adopting flat fees will harm the car-buying public. Rest assured NADA will continue to lead the charge and defend in-dealership financing.”