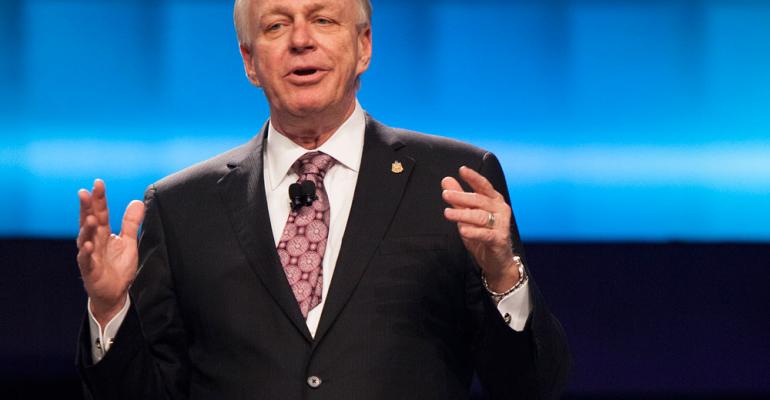 ORLANDO, FL – The new National Automobile Dealers Assn. chairman picks up where his predecessor left off, saying auto makers are too involved in the business of dealers.

“The issues posed by stair-step incentive programs and by mandatory facility upgrades are just two of the most recent examples of manufacturers intruding into dealers’ businesses,” says David Westcott, who succeeds William Underriner as the trade group’s top dog.

A big challenge facing dealers is their relations with auto makers, says Westcott in a speech at the closing general session of the annual NADA convention here.

The state of factory-dealer relations is a perennial theme at annual NADA conventions, with specific issues and intensity levels varying from year to year.

When Ford and General Motors started running some of their own dealerships in the late 1990s, NADA conventions resembled war dances. Today’s differences aren’t as heated, but clearly many dealers feel some auto maker programs are flawed.

At issue the most are stair-step incentive programs, which NADA says are executed unfairly, and facility-upgrade projects, particularly ones that require all same-brand stores to look alike.

The allocation systems of such plans often fail to take into account that some markets are more affluent than others, some dealerships are bigger than others and some geographical areas contain more dealers than others, he says.

NADA members should press auto makers for ways to make sure all dealers, large and small, get equitable treatment, says Westcott, a Buick GMC dealer in Burlington, NC.

NADA’s beef with some facility-upgrade programs is that most auto makers fail to show how building elaborate facilities, especially ones that look alike, will sell more vehicles and offer a justifiable return on investment.

“Sometimes facility upgrades are needed, but that decision must be tied to the particular needs of a dealership and not driven by a one-size-fits-all mandate,” Westcott says.

The new chairman’s speech also touches on a longstanding NADA gripe: the belief that government over-regulates dealers. Heurges dealers to rally against government mandates by showing public officials how some regulations are “useless and obsolete.”

To demonstrate a past NADA win in that regard, he holds up a book, saying, “This is the insurance booklet that practically no one ever asked for, but dealers were still required to have on hand for our customers, or face a $1,000 fine.

“Did you know this requirement was on the books for 21 years? But not anymore; we fought and Congress got rid of it.”

Some regulations are “just plain silly,” Westcott says “This year, we are looking to eliminate the rule that requires a dealer to sign a document that basically says a new car has an emissions system. Seriously, has anyone here ever gotten a car from the factory that didn’t have a muffler?”