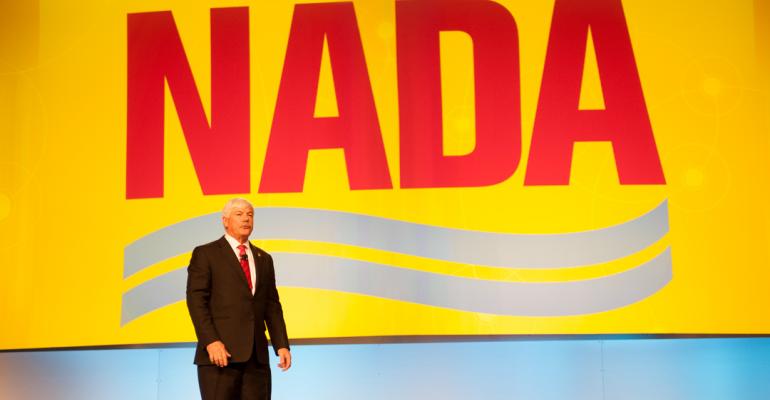 NADA Chief Not Hung Up With Modern Technology

Jeff Carlson says smartphones are part of everyday life &ndash; and proceeds to prove it. Twice.

Delivering his inaugural speech at the trade group’s convention here, Jeff Carlson pulls out his smartphone and shoots a selfie, inviting the audience to do the same.

He aims to demonstrate life in the digital days.

“Who would think it would go off now?” he tells the audience, holding it up and adding, “This is the future, right now.” (No, he didn’t go so far as to take the call.)

Smartphones are ubiquitous, and smart dealers have adapted to customers armed with them. As Carlson notes, many people use their phones “to shop us while they’re in our showrooms.”

It is part of a rapidly changing auto-retail industry, Carlson says. “The thing about evolution is that someone has to keep up with it. Dealers have done that.”

Yet, it contrasts with moods at NADA conventions of the late 1990s when many dealers voiced fears the Internet would put them out of business. That obviously hasn’t happened.

But new worries replace old ones. Carlson goes down the list of current dealer concerns. Among them are what he describes as gung-ho regulators. He singles out the U.S. Consumer Financial Protection Bureau. “The regulatory world doesn’t understand what we do.”

“We’ve got to bring younger dealers into the mix,” he says at the AFSA conference, after putting away his phone.

Five Tips to Prevent Car Dealers From Getting Conned
Aug 14, 2020