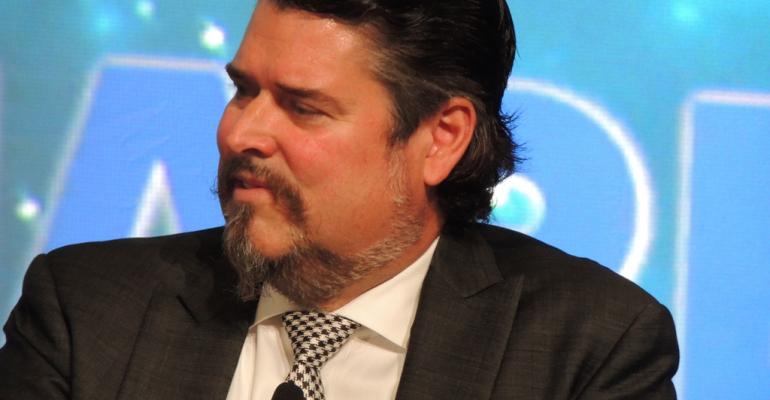 <p><strong>Boeckmann advises some automakers to not &ldquo;bring down the top passionate dealers&rdquo; while trying to bring up the bottom.</strong></p>
Dealers

&ldquo;I want people to have fun. That&rsquo;s when they want to come back,&rdquo; says Beau Boeckmann, president of Galpin Motors.

LAS VEGAS – Beau Boeckmann, president of Galpin Motors, a place once dubbed the Disneyland of car dealerships, recalls hearing an auto executive lament, “If only we can make the dealership experience painless.”

Boeckmann bridles while recollecting that comment on how to improve auto retailing.

“Painless? That’s no motivation,” he says. “I want people to have fun. That’s when they want to come back. And yes, buying and servicing a car can be fun – if the focus is on the customer having fun.”

As the kickoff keynote speaker at the 2016 J.D. Power Automotive Marketing Roundtable here, Boeckmann offers his take on the joy of buying a vehicle at Galpin, a seven-store, multi-franchise dealer group based in the San Fernando Valley near Los Angeles.

“It’s critical that your message is true and lives up to your promise, and that you make doing business with your dealership enjoyable,” Galpin’s president says. “That’s right. Enjoyable. Shopping for a car should be fun and exciting.”

But car buying over the years has not been particularly pleasurable for many consumers because of some dealers’ shortcomings and business tactics.

It has led to many consumers likening visiting a dealership to going to a dentist for a root canal, Boeckmann notes.

“So some dealers treat the process that way,” he says. “Just get them out ASAP, because we know they don’t want to be here anyway.”

Some dealers focus too much on the transaction, but Galpin tries to focus on the customer experience, Boeckmann says.

Galpin’s approach is to make car shoppers want to come, enjoy themselves and be in no hurry to leave.

That’s accomplished by offering spectacular facilities including a renowned restaurant, “The Horseless Carriage,” and an eye-catching display of custom cars. “We look at form following feeling, not function,” Boeckmann says.

The staff, from the top down, assumes what he calls “a servant mentally (mentality?)” by trying to help customers to the fullest.

Boeckmann gives much credit to his father Bert Boeckmann, who took over a small Ford store in 1953 and built the dealership group that includes Jaguar, Aston Martin and Lincoln. Galpin Ford is the largest Ford store in the world by sales volume.

“My father is the most honest man I know,” Beau tells the conference audience, which includes the elder Boeckmann and his wife. “He sincerely cares about every customer that comes in. It is a love for others, which includes listening to their wants and needs.”

Beau Boeckmann advocates dealer-automaker collaboration to create customer enthusiasm that keeps them loyal. Without naming names, he questions the way some automakers work with their dealers toward that goal.

“Some manufacturers have found it necessary to dictate many standards, whether it is in facilities, online or elsewhere. Unfortunately, this can have a negative side effect for not only the high-performing dealer, but for the manufacturers themselves.

“While I certainly sympathize with the factory when they have dealers that simply aren’t engaged, it is crucial that they don’t bring down the top, passionate dealers while they try to bring up the bottom.

“We need to stay one step ahead of the competition, and that is extremely difficult when you are forced to conform to the lowest common denominator.”

The title of his J.D. Power conference speech is “Will Dealerships Die or Thrive in an Autonomous World?”

Answering that, he says dealers who make the right moves will do well in the impending new era of self-driving cars. And he doesn’t think the advent of that transportation transformation will stop people from wanting to privately own vehicles, despite some predications to the contrary.

“By working together, we can create the environment and the experience that will really ‘wow’ customers when they take delivery and service their private autonomous vehicle.

“If manufacturers and dealers join forces, we can leverage our infrastructure to serve the customer best in an autonomous world.”

Besides his father, he mentions one of his other heroes in the car business: Alan Mulally, the former Ford CEO who is credited with turning the company around.

Boeckmann recalls once asking the auto executive the secret of his success.

“He didn’t miss a beat. He said “Love and be loved, in that order.”

“If you do that, not only will you thrive in an autonomous world, but in life itself.”