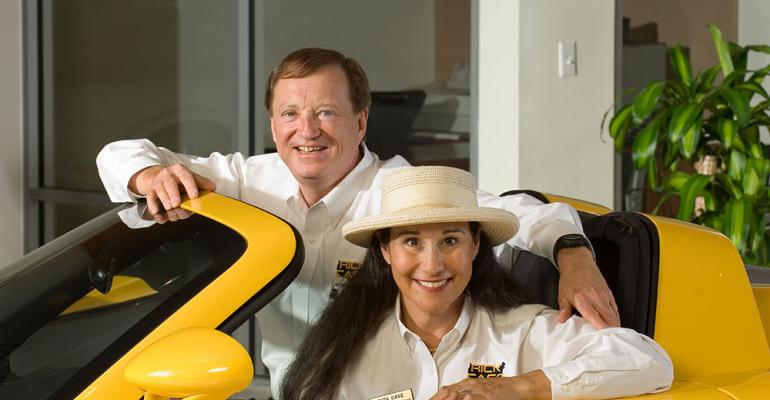 Married With Children and 15 Dealerships

Regulars on the WardsAuto Dealer 500, Rick and Rita Case form a powerful partnership.

Customers who walk into a Rick Case dealership are greeted by a manager and get both the manager’s card and the dealership owner’s card, including cell and home phone numbers.

That’s unusual for a high-volume multiline dealer with many stores and more than 1,000 employees. But Rick Case swears it’s one of the secrets to the success of the auto group with stores that regularly show up on the WardsAuto Dealer 500. Flagship Rick Case Honda is No.15 this year.

Associates go the extra mile when they know customers can call up the owner, he says. “Treat customers as your best friends.”

There are 15 Case dealerships: Honda and Hyundai in Cleveland; Audi, Mazda, Hyundai and Kia in Atlanta; Honda, Acura, Hyundai, Volkswagen and Fiat in South Florida.

That number jumps to 18 this year when the Cases will add Alfa Romeo, Maserati and Kia to the fleet in South Florida.

The Case dealerships sold more than 40,000 new and used units last year. They expect to sell 44,000 this year.

The dealership group ranks No.51 on the WardsAuto Megadealer 100 with total revenues of nearly $900 million. Case opened his first dealership in 1962 in Akron, OH.

He attributes business success to customer retention and the group’s unique culture of customer service.

He also has a formidable partner, his wife, Rita, who is from a dealership family and has been active along with him in day-to-day management since their marriage 34 years ago. It’s not uncommon for them to work 7-day weeks.

She oversees parts, service and financial operations, joining Case in his early Ohio dealerships days because she wanted to stay in the business.

Growing up in California, Rita Case worked in her parents’ Honda of Santa Rosa dealership. Open since 1968, parents Bill and Lori Manly still operate that store.

In 2011, the Cases wrote a book titled Our Customers, Our Friends that recounts their then-50 years in the business and the community. It includes comments from industry leaders such as megadealers Roger Penske and Mike Jackson, and a forward by AutoNation founder H. Wayne Huizenga.

In the 1980s, they moved Ohio employees to Fort Lauderdale when Florida operations took off, seeding it with managers from other stores. “That’s how we’ve grown this company and maintained it,” Rick Case says.

“It doesn’t matter if you’re in 14 states or your backyard, we have consistent systems that have carried our message and (fueled) our success,” says Rita Case. “It’s a matter of having a proven process and implementing it.”

Regardless of the different brands being sold, “a process can be very consistently managed,” she says.

Case consistently has been one of the country’s top Honda dealers since acquiring a franchise in 1972.

The Cases new 8-story Volkswagen dealership is taking off since opening in December. “It’s the largest VW store in the country both in size and sales,” Rita Case says. It sold 392 units its first month. “That’s what a lot of Volkswagen dealerships sell in a year,” she says.

The Cases are no strangers in their markets. In Florida, Case ads appear on six TV stations. “Everyone knows our brand,” says Rita Case. They’re also known for their charity work.

In 1986, Case opened the first Acura and Hyundai dealerships in the country and, at one point, ranked as the world’s largest Acura dealer for seven consecutive years.

In April 2005, the Cases opened another Hyundai dealership in South Florida, the U.S.’s largest.

In January 2008, they opened a Smart dealership in Fort Lauderdale. The store has since closed and was converted into a Fiat outlet. It became the nation’s largest-volume Fiat store in its first month.

Rick Case believes in “wowing” customers. Ways to do that include:

Near and dear to the couple’s hearts are their charity efforts. They support more than 30 charitable groups and have donated millions of dollars.