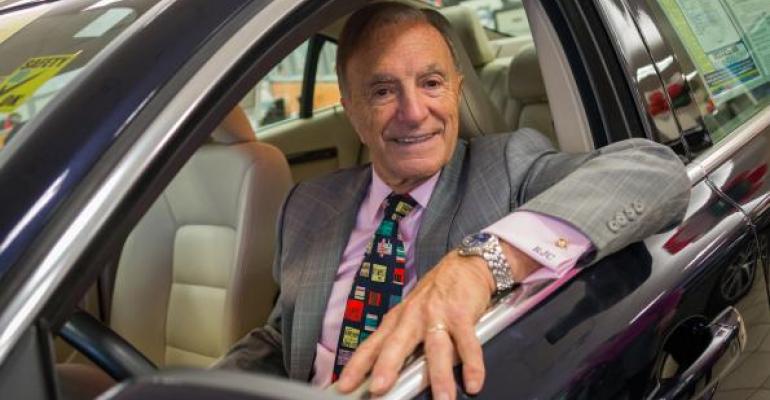 <p><strong>&quot;I went in to buy a used car, and I ended up buying the dealership,&quot; Ciccolo recalls.</strong></p>
Dealers

Ray Ciccolo talks about what it&rsquo;s like to be a dealer now and what it was like when he started in 1962 as a kid out of college.&nbsp;

Ray Ciccolo was fresh out of college, didn’t have much money and was looking for something to do after selling his coin-operated laundromat. So, he became a new-car dealer, even though he had no experience in that field.

Acquiring a franchised dealership just like that virtually is impossible today. It takes lots of capital, a proven track record and a thorough automaker vetting to become a dealer principal today.

But Ciccolo got into the business in 1962 after earning a business degree from Suffolk University in Boston. Despite his dealer inexperience back then, it has worked out well for him in the ensuing years.

He went on to found the Village Automotive Group, which includes two Volvo stores as well as Honda, Hyundai, Audi and Porsche outlets in southeast Massachusetts.

Ciccolo grew up in a Cambridge, MA, family of six children. His father held a variety of jobs, including night-shift work at Ward Baking Co. When that closed, he opened what is believed to be Cambridge’s first coin-operated laundromat, Thrifty’s. That inspired his son to later open one too while in college.

Ray Ciccolo’s Boston Volvo Village is New England’s oldest Volvo dealership. This spring it will relocate next door to a $13 million facility that’s currently under construction. Features will include a two-story vertical showroom and a basement service department.

Ciccolo, who just turned 80, is noted for his philanthropy, both in Boston and abroad. Beneficiaries include his alma mater Suffolk University and orphanages in China and Haiti. To commemorate Boston Volvo’s 60th anniversary this year, Ciccolo donated $180,000 to local nonprofit organizations that his customers nominated and voted for.

WardsAuto spoke with him about his career, auto retailing then and now and more. Here’s an edited version of the Q&A.

WardsAuto: You became a Volvo dealer 55 years ago. That was a pretty obscure brand in the U.S. back then.

Ciccolo: Right. The original store was dualed with Nash (a now-defunct brand). My controller came to me around 1964 and said, “All the expenses are with Nash, all the income is on Volvo.” He said if we could shed Nash and keep Volvo, it would be a pretty nice store.

WardsAuto: Not a bad choice. They don’t sell many Nash cars these days.

Ciccolo: That was a pretty startling thing to do. No one back then ever gave up a domestic franchise and kept an import franchise. Sure enough, his numbers were correct. When we gave up Nash, we started making good money, and at the time Volov was a low-volume import brand.

WardsAuto: What drew you to the dealership world in the first place?

Ciccolo: I was single and didn’t know what to do. I had a friend who was general manager of this dealership where I went to buy a used car. He said to me, “This guy (the store owner) is going broke. He doesn’t know what he’s doing. You should consider buying the business.”

I went in to buy a used car, and I ended up buying the dealership. With very little money and no knowledge of the business, I became a dealer.

WardsAuto: You majored in business administration, so you had kind of a leg up there.

Ciccolo: A little bit. But I was young and green.

WardsAuto: A person in that situation sure couldn’t buy a dealership today.

Ciccolo: No, no, no. Back then, you could throw a franchised dealership in a gas station. You could get into the business with very little money. Nowadays, between (a manufacturer) checking you out thoroughly and having to have lots of money and good credit, it requires a tremendous effort to get in this business now.

WardsAuto: Is that good or bad? Do you miss the days when a young entrepreneur could buy a dealership and make a go of it?

Ciccolo: It has its pluses and minuses. Nowadays, if you are a smart kid in college and have a good software idea, you can become a multimillionaire overnight with no investment. So, there are other opportunities for young, smart kids coming out of college today.

WardsAuto: What about opportunities if someone like that were interested in an auto-retailing career? What advice would you give them?

Ciccolo: In some respects, it is an easy business to get into. If people have a passion for it, they can move up quickly, become a good manager and eventually have no problem buying into a store, under the right circumstances. People who are good in anything find opportunities.

WardsAuto: Volvo today seems like an ambitious brand. (It delivered 81,504 vehicles last year in the U.S., according to WardsAuto data.) It opened a new plant in South Carolina. It now has a design center in the U.S. It has lofty sales goals and a decent lineup. How would you compare Volvo now to back then?

Ciccolo: The major difference is the Chinese owner, Geely, coming in with a tremendous amount of money and access to it. Geely’s owner put the skills of the Swedes to best use. They were working on a lot of good products when Geely bought Volvo. The more they expand and acquire, they’ll have greater economies of scale and do things Volvo itself in Sweden was unable to do.

WardsAuto: Has that supercharged your business at all?

Ciccolo: Yes. The volume is up. So are the expectations. They just sold 24,000 XC90s to Uber in a joint venture. They are involved in developing autonomous cars. They are doing a new subscription service (for the XC40 compact CUV that goes on sale in March) that’s pretty out there. They also are coming out with a whole new line of electric cars.

WardsAuto: Who was buying Volvos when you started selling them?

Ciccolo: We used to think of the customers as pipe-smoking college-professor types. People who were looking for something a little different. Now, Volvo has become more mainstream.

WardsAuto: Was it just a stereotype then that Volvo owners were pipe-smoking professors wearing tweed sports coats with leather elbow patches?

Ciccolo: That was pretty much the customer.

WardsAuto: You seem like a generous guy who supports the community. Where’s that come from?

Ciccolo: I was brought up in Cambridge. We didn’t have two nickels to put together back then. But I’ve been extraordinarily blessed. You get involved in the community and give back. It’s a wonderful thing to do, and it makes you feel wonderful.

WardsAuto: Anders Gustafsson, the head of Volvo in the U.S., did a whirlwind tour during which he met virtually all Volvo dealers in the U.S. What are your impressions of that and of him?

Ciccolo: He’s a remarkable guy. In the group meeting I attended in New York, he sat in front of all the dealers with no notes, no back up. He took questions. He was in complete control, very transparent.

The thing I liked the most about Anders is his family has a string of Volvo dealerships in Sweden. This is a man who understands the retail part of the business. That’s important. Over my career, one of the major complaints has been wholesalers don’t understand retail operations.

Ciccolo: They’ve risen dramatically. In the past, you could tell them six months after they bought a car that the engine was shot and they needed to replace it. They might be unhappy, but you had no problem telling someone two weeks out of a 90-day warranty that they would have to pay for repairs. That doesn’t happen today.

WardsAuto: Today, if a catastrophic breakdown like that occurred early into ownership, the customer would expect a new car.

Ciccolo: Absolutely. They’ll demand a new vehicle, and most manufacturers would be happy to accommodate them. But they make much better cars today. The customer expectation now is these things will go forever.

WardsAuto: Are automakers now more involved in how dealerships are run?

Ciccolo: Today, a manufacturer controls nearly every single aspect of your business, including your Internet response to a customer inquiry and all sorts of customer touch points. Before, there was a lot more individuality among dealers.

WardsAuto: Is it a good or bad thing that automakers are more involved in how their brands are represented?

Ciccolo: It is what it is. On one hand, a dealer could lose some creativity or individuality. On the other hand, I certainly understand why automakers have become more involved. There were some bad dealerships out there. Automakers wanted proper representation.

WardsAuto: Presumably there’s a fine line between exercising home-office quality control of the distribution network and interfering with it?

Ciccolo: No question about it. Back then, there were a lot of individuals owning individual dealerships. We never heard of public companies owning dealerships.

WardsAuto: You mentioned bad dealerships of the old days. How were they bad?

Ciccolo: For one thing, many of them would roll back odometers. We didn’t do that but others did, and our real low-mileage cars were competing against their tampered-with low-mileage cars, which was an unfair advantage. It was a big deal when odometer laws were passed.

WardsAuto: A retired Boston dealer once told me – off the record – that his dealership partook in that practice. He said a customer who was looking at used cars on his lot one day, approached him and said, “How come all your used cars have the same mileage on their odometers?” It turned out the dealership employee who did the rollbacks had a lucky number and was using it when he reset all the odometers.

Ciccolo: That’s funny. Do you know who the most famous odometer rollback person is?

Ciccolo: Jay Leno. He’s admitted rolling back odometers was one of his jobs when he was a young man and working as a car detailer in Boston.