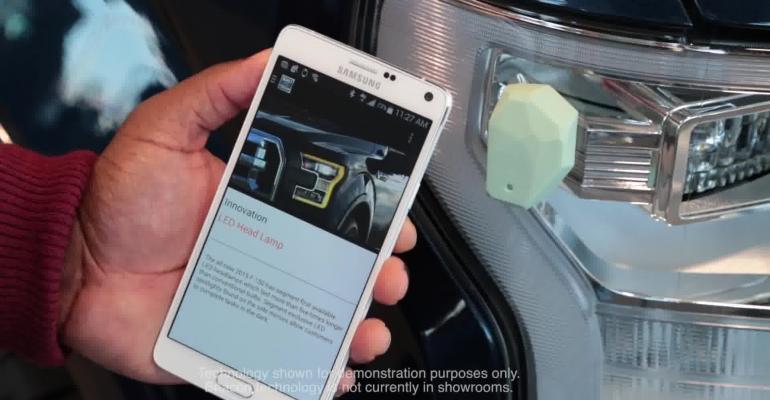 Ford to Use Beacons to Beckon Buyers

Under a pilot program dealers will attach beacons to models they want to feature in their showrooms. As a shopper walks around the vehicle, the devices will broadcast key information to the customer&rsquo;s smartphone that might help close a sale.

Ford dealers soon may have another way to draw buyers into their showrooms: beacons.

The U.S.-based automaker is set to begin a pilot program that will employ the same type of electronic devices used to track inventory in manufacturing to pitch vehicles on the sales floor to interested shoppers.

Ford envisions the use of beacons as a natural evolution of a more-independent sales process that now starts for most customers on the Internet.

“(The purchase cycle) has been so compressed,” notes Trisha Habucke, digital manager- Ford.com, global and mobile. “Even five or six years ago, people would actually go to the dealer four or five times (before making a purchase).

Here’s how it would work. Dealers would attach the beacons to models they want to feature in their showrooms. As a shopper walks around the vehicle, the devices would broadcast key information to the customer’s smartphone that might help close a sale.

A beacon positioned at the front of the car, for example, could point out its advanced LED lighting, while one at the rear might focus on its class-leading cargo-carrying capacity. Another positioned elsewhere on the vehicle could broadcast information on a special rebate or discounted option package.

The beacons also could be used on cars out on the lot, allowing weekend or other off-hours shoppers to be pitched on the high points of various models as they browse.

“You can use them anywhere,” Habucke notes.

The beacon idea really is just the next generation of a process now used on dealer lots that allows shoppers to scan QR codes on vehicle invoices to access additional information on a new car or truck, Habucke says.

“We said, (maybe) we can go a step forward with the beacon technology and automatically render that information to the customer without that call to action to swipe (a QR code),” she says.

The cost to dealers likely would be minimal. The beacons themselves run only about $30 apiece. The trickier part might be programming them with the information to send to shoppers, but who does what and how are the types of details Ford will try to iron out in its pilot program.

To work, customers will have to install specific apps on their smartphones to receive the beacon broadcasts. Initially, Habucke says, Ford could tap into the capability of such third-party car-shopping sites as Edmunds or TrueCar – or even general retail apps like Shopkick – to deliver its in-showroom messages.

“We’re finding a lot of people have one of those (apps)” by the time they visit a dealer, Habucke says.

But eventually, the automaker could develop specific branded software it could push out to interested consumers right in the showroom or who browse the Ford website ahead of time.

Ford is looking to begin a pilot test program at a handful of dealers in the third quarter.