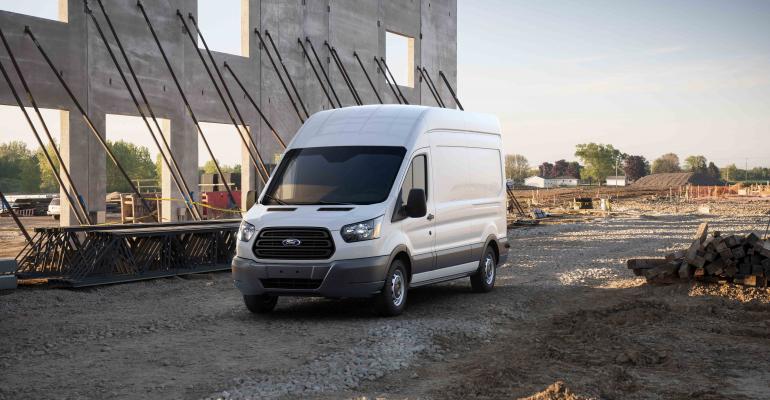 <p><strong>Transit offered in 58 different configurations and with host of accessory options.</strong></p>
Dealers

There are myriad ways to outfit the popular fullsize van, which means selling the Transit requires deep product knowledge and a firm understanding of each customer&rsquo;s unique needs.

With 58 different configurations and a host of accessory possibilities, the Ford Transit fullsize van is a complex vehicle to sell.

But it appears Ford dealers have it figured out.

Already the Transit, which ultimately replaces the E-Series (Econoline) in Ford’s lineup, is the top seller in the fullsize-van sector. In fact, launched in June 2014, the model claimed No.1 status just six months later.

The secret to its success? A dealer body that knows the ins and outs of the multifaceted product and its buyer base, Ford executives say.

The trick to selling a Transit is “understanding what that customer needs for their particular use,” Krista Pfeiffer, assistant brand manager for the vehicle, tells WardsAuto. “Whether they are going to need it to fit in a garage, whether they’re going to be doing towing or maybe they’re hauling heavy cargo.

“It’s really important for the sales consultant to do a ‛needs assessment’ for that customer.”

The Transit is one of a growing line of European-style vans that have infiltrated the U.S. market in recent years, replacing traditional, lower-profile body-on-frame vans such as the Econoline and long-defunct Dodge Van that held sway in the American market for more than 50 years.

Chief competitors to the Transit include the Mercedes Sprinter, Ram ProMaster and Nissan NV, but there’s also an emerging market around smaller Euro-style vans such as the Transit Connect, Chevrolet City Express, Nissan NV200, Mercedes Metris and Ram ProMaster City.

Buyers seem to like the versatility provided by the bigger, taller vehicles that offer walk-in cargo bays and that seemingly endless opportunity to customize.

Ford’s Transit Upfit Configurator website features ways to modify the van ahead of the ordering process with special racks, screens, storage compartments and other items for specific commercial uses, such as general contracting, plumbing, electrical and catering.

“With an E-Series, there weren’t the options and configurations,” Pfeiffer says, noting because of the flexibility far more Ford dealers – 95% – have signed on to stock the Transit than had carried the Econoline (53%). “The Transit can fit so many different customers and their uses that we’re finding many more customers are interested in that flexibility.”

There are no special hoops dealers must jump through to carry the Transit, which comes in multiple wheelbases, lengths and heights. Existing service equipment will accommodate the vehicle, so all that is needed is to complete the standard online product training required with any new vehicle.

Some 647 retailers also are part of Ford’s Business Preferred Network, meaning they are specially trained and certified to deal with the mostly commercial-side customers who make up the lion’s share of Transit buyers.

Ford says more than 60% of Transits are sold to fleet customers, who generally buy more than one and typically purchase cargo models. About 30%-40% of Transit sales is considered retail and involves the passenger model, though even some of that volume actually is aimed at business uses.

The automaker does market the Transit Wagon as an alternative to a minivan, however, and Pfeiffer says about 10%-15% of sales go to personal-use buyers looking for a family vehicle.

“We are (drawing) a few (away from minivans),” she says. “We’ve seen some conquest sales from (the Honda) Odyssey and a few other minivans, but more (buyers are coming) from the Sprinter and (more conventional) Chevrolet Express and our former E-Series customers.”

Overall, sales are strongest in the Northeast, both for fullsize vans in general and the Transit in particular. But Pfeiffer says the Transit also does well in California, Florida and the Northwest.

The Northwest is where Dominique Coxson, recently named the best Ford Transit sales consultant in the country, works for Seattle-area’s Lakewood Ford. Coxson beat out seven other finalists for the $5,000 top prize who submitted videos of Transit sales pitches.

“Dominique focused on (Ford’s) tough testing (of the Transit) and its technology,” Pfeiffer says as to why Coxson was chosen as the contest winner.

But selling also requires some patience. It isn’t unusual for a buyer to make several trips to the showroom before signing on the dotted line. Some dealers, particularly larger retailers that are part of the Business Preferred Network, will have a specialist in the showroom to deal with Transit customers, but many do not.

“We feel it’s important for mainstream salespersons to know about Transit,” Pfeiffer says.

Ford dealers in the Business Preferred Network move about 25 Transits a month on average, she says, with retail dealers selling about five each month.

With the Transit, smaller Transit Connect and still-in-the-stable Econoline, Ford says it has the best-selling brand of commercial vans in all 50 states and the District of Columbia, citing IHS Automotive registration data. Momentum is expected to continue.

“Transit sales are going to be great,” Pfeiffer says. “We’re already America’s best-selling commercial van and we definitely plan to continue that.”

Ford Says It Pushed Transit to Limits During Development
Jun 20, 2014