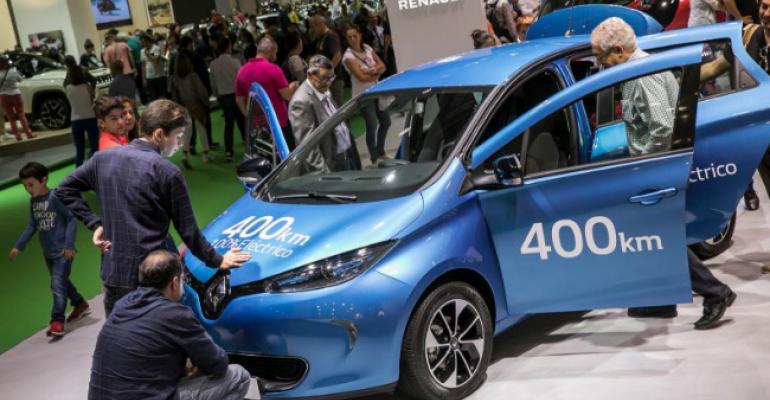 Renault Spain&rsquo;s Ivan Segal is urging creation of a residual-value scale ​​for used EVs. He says that would give dealers who signed buy-back contracts with fleet operators time to have adequate marketing plans when the first of those vehicles are returned.

MADRID – An executive with Renault’s Spanish subsidiary is concerned the electric vehicles sold to business and rental fleets will have lower-than-expected residual value when they are repurchased by the French automaker.

Ivan Segal, commercial general manager-Renault Spain, is urging establishment of a scale of residual values for used EVs. Speaking at the recent Barcelona auto show, he says that would give Renault dealers who signed buy-back contracts with fleet operators time to develop adequate marketing plans for the vehicles now that the first of those purchases are coming due.

The dealers sold all-electric, plug-in hybrid and other electrified vehicles in the belief the cars would be much more valuable at the time of sale back to the dealer than now can be expected.

“Nowadays, when a motorist wants to change his EV for a new one – although this does not necessarily mean another EV – the first thing that the dealer has to do is look for a buyer for the old EV, and that greatly slows down the sale of the new vehicle,” Segal says without citing specific monetary or sales figures.

Some of the EVs being returned to dealers could be remarketed under car-sharing schemes, Segal says. “Some competitors have entered in this market but until now they have only got profits regarding image, not money,” he observes.

Spanish registrations of all electrified vehicles, including motorbikes and quadricycles, totaled 4,506 units in 2016, up 51.5% from like-2015. The 1,902 registrations tallied in the first four months of 2017 were up 35% from prior-year.

Car and light-truck registrations totaled 1.15 million units in the country in 2016, up 10.9% from the previous year.