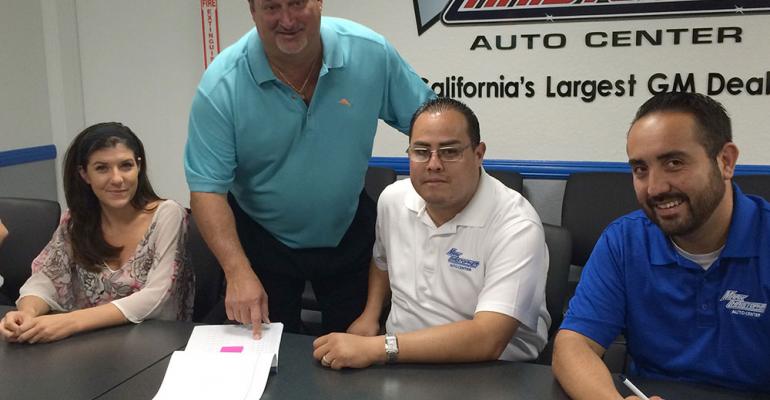 Chris Leggio, whose flagship store is No.42 on the WardsAuto Dealer 500, lauds GM, &ldquo;our partner.&rdquo;

His business took a hit, but dealer Chris Leggio is doing better these days.

He is owner and president of a business started by his parents in 1975. It now includes three southern California locations with Chevrolet, Buick, GMC, Cadillac, and General Motors commercial-truck franchises.

The flagship store, Mark Christopher Auto Center in Ontario, CA, is No.41 on the WardsAuto Dealer 500 with $178 million in total revenue and 4,505 total unit sales in 2013. Twenty-five to thirty percent of the group’s sales are vehicles purchased for commercial use.

“Southern California took a major hit during the recession and it’s taking a little while to recover,” Leggio says. “The concrete companies, contractors, heating and air-conditioning companies, tool companies and even landscapers are replacing their vehicles two or three at a time as opposed to five or six. We’re gradually improving, and business is very steady.”

Leggio says the recession taught him and his team to work “smarter.”

“We did more cross-training and empowered our employees to do more than just one job,” he says. “Maybe a receptionist would function as an office staff pulling contracts or working with the Department of Motor Vehicle or the cashier.”

“That helped us sustain decent profits and maintain our employee base to where we weren’t hiring and firing with every market fluctuation,” he says.

“It’s about getting the accessories and aftermarket products to the dealer within 24-48 hours as opposed to having everything direct shipped from Detroit, which could take a week to 10 days,” Leggio says. “GM was a very small player in aftermarket (until they began) partnering with interested dealers, and we were probably the first hand-raiser.

“Instead of one dealer buying 20 or 30 bed liners, we will buy 300 and store them and sell them cheaper to the dealer. That’s a profit opportunity for the dealer.”

Leggio says the recent GM vehicle recalls have been inconvenient, but they haven’t soured his customers on the brand. Indeed, GM’s U.S. sales in May rose 13% compared to the same time in 2013.

“We’ve had a few challenges with the recalls, however I believe GM is handling it very well,” Leggio says. “You always have upset customers that you have to handle on a one-on-one basis, but GM, our partner, is working very closely with us on those very select customers.”

People aren’t run away from the product, he says. “If you have a good relationship as we do with a lot of our customers, they understand.”