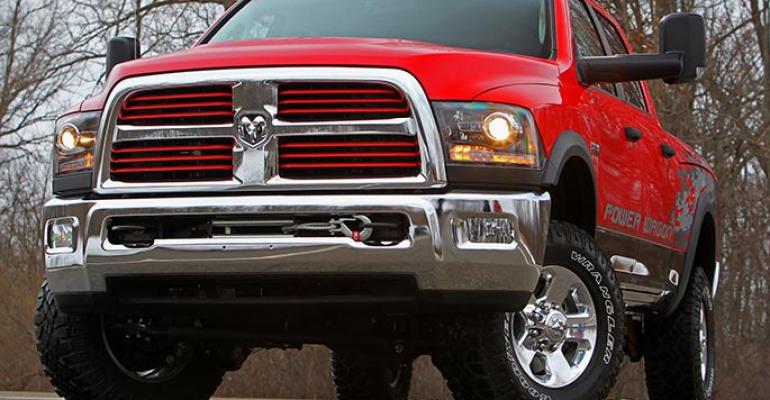 Falling oil prices have helped dealerships in general in the U.S. sell more trucks. But in Texas, where many of those buyers earn their money from selling oil and gas or providing services to the industry, heavy-duty truck sales are down.

In the good old days, companies in the oil-field business would buy a dozen heavy-duty trucks at a time, says general sales manager Nick Flores. Now, they might buy two.

“The scale has changed dramatically,” says Flores, whose dealership is in Pleasanton, TX, close to the Eagle Ford Shale gas and oil field.

Falling oil prices have helped dealerships in general in the U.S. sell more trucks. But in Texas, where many of those buyers earn their money from selling oil and gas or providing services to the industry, heavy-duty truck sales are down. That has dealerships making adjustments and waiting for better times.

“We have had to get into the mindset of selling half-ton trucks to regular Mr. and Mrs. Customer for the house, or selling them cars or Jeeps,” Flores says, noting his overall sales are off about 15%.

Customers also have become much more cost-conscious, with many now looking for a higher-end truck for both work and family use. That requires different sales tactics.

“We kind of had to semi-train our salespeople to actually sell,” Flores says. “It took us a good 35 to 40 days, but we did adapt.”

The sales mix also has changed. A year ago, Atascosa was doing 85% of its business in high-margin heavy-duty pickups such as Ram 2500 through 5500 models.  That dropped to 50% but has recovered to about 70% of truck sales, he says.

Half-Ton Trucks Not Pulling Their Weight

According to IHS Automotive, heavy-duty non-luxury fullsize (three-quarter- to 1-ton) pickup registrations in Texas fell 13.4% to 86,231 units in 2015 compared with the previous year.

It could have been worse: The Texas economy is more diversified than in the 1980s, when a fall in the price of oil was devastating, says analyst Tom Morgan at Drillinginfo, an Austin-based provider of software and services to the oil and gas industry.

Overall, the Texas economy “is doing well. Not as well as two years ago, but still doing well,” he says.

Low oil prices have been a boon for truck sales overall. Nationwide, pickup registrations went from 13.4% in 2014 to 14% of the total light-vehicle market in 2015, says Tom Libby, manager-loyalty solutions and industry analysis at IHS Automotive.

Indeed, registrations of fullsize non-luxury half-ton trucks in Texas inched up 0.5% in 2015 to 225,770 units compared with the previous year, according to IHS.

Some areas of Texas have seen truck sales rise. New Ford-, GMC- and Ram-brand truck registrations in a 7-county area in Central Texas rose 9.3% year-on-year in 2015, according to Dallas-based The Freeman Auto Report.

That area includes Austin, where Drillinginfo is based. Analyst Morgan says, “In Austin, you have a lot of people who work in the tech industry who drive trucks because they like to drive trucks.”

In areas dependent on oil and gas, however, higher sales fueled by low gas prices haven’t taken up the slack. At Jordan Ford in the San Antonio area, growth in sales of half-ton trucks such as the Ford F-150 has made up for only about 10% of his dealership’s overall drop in truck sales, says Mark Cross, dealer principal and general manager.

“People that didn’t drive trucks before are (now) driving trucks. It is a great deal from a nationwide standpoint,” he says. “For those of us dependent on and affected by oil prices (low gas prices) is a problem.”

Cross says his truck sales are off 25% to 30%, divided between light- and heavy-duty models.  He is concerned but not defeated by the downturn, noting customers such as contractors still need trucks.

“We look at it like a temporary thing,” Cross says. “While we are waiting for a turnaround we can be concentrating on other areas. Good habits are formed in tough times.”

At Atascosa Dodge Chrysler Jeep Ram, Flores is equally resolute; despite taking a hit from falling oil prices, “we’re not crying wolf yet,” he says.