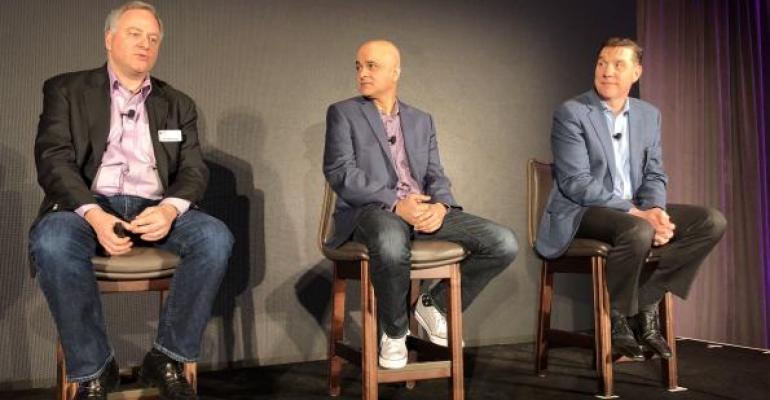 In a WardsAuto Q&amp;A, top executives describe how and why the company&rsquo;s heralded Fortellis came into being. &nbsp;&nbsp;

The Fortellis Automotive Exchange includes universal connections and protocols. CDK says it enables an exchange of information and data in a secure and accessible network.

“We recognized that our industry is ready for an entirely new and collaborative approach to address the major roadblocks that are impeding innovation that leads to better customer experiences,” says CDK CEO Brian MacDonald.

Dealer computer operating systems often include an assortment of software systems from different providers. Those systems range from inventory management to customer-relationship management to digital marketing.

A dealership’s DMS – the central computer brains of a store – accommodates those different systems, but they don’t typically work in concert, resulting in the need for multiple sign-ins and other inefficiencies.

“There are lots of solution providers but they don’t ‘talk’ to each other,” Frey says.

“It’s agnostic and its global,” Frey says, referring to its openness. “It unlocks the log jam and connects the pieces.” Collaborators “and even competitors” are welcome, he adds.

CDK and Reynolds and Reynolds are among auto retailing’s biggest IT giants. They currently face antitrust lawsuits from several software providers. Those companies allege CDK’s and Reynolds’ DMS data-access policies and certification fees stymie other digital providers from integrating their software at dealerships that are CDK and Reynolds clients.

CDK and Reynolds say the certification and fees are necessary to thwart cybersecurity breaches. A CDK spokesman says the new open platform is not a reaction to the active litigation, noting Fortellis development predates the 2017 lawsuits.

It’s not unusual for some dealerships to have 15 to 20 software providers. “The world is too big to have one vendor,” says McDonald, adding that “forward-thinking vendors realize (Fortellis) is an easier way to forward their products.”

In an interview with WardsAuto at the 2018 National Automobile Dealers Assn. Convention and Exposition in Las Vegas, MacDonald, Frey and CDK’s Chief Technology Officer Rajiv Amar discuss how Fortellis came about and how they think it will affect auto retailing.

WardsAuto: What are the origins of this?

MacDonald: Since I came to the company in 2016, I’ve brought in customers to board meetings to discuss their experiences with CDK and how they’d like to see things evolve.

One of our largest customers came in with a workflow chart of all the different (digital) solutions they have.

The CEO said it was a complicated environment for employees. Twelve sign-in IDs, 20 different software packages. He said he’d like CDK to fix this so his employees could be more efficient and provide better customer experiences.

That workflow chart illustrated a big industry problem. We used that chart a lot internally. It shaped our thinking. We stepped back and said, “What’s our purpose as a company, what’s our role in this industry?” We ultimately settled on the vision of being an enabler of automotive commerce. We did development cycles to build the Fortellis platform to solve the industry problems of complexity of operations.

WardsAuto: This started with a dealer coming to you?

MacDonald: Yes, and saying, “Look at this mess, this spaghetti chart. I’d really like your company to help.”

I’ll be the first to admit, I didn’t walk out of that meeting and say, “Let’s go build a platform.” We talked about it and this young man here (Amar) said, “We can do it.” Ron (Frey) came in. They put their two heads together.

We wanted to make sure we weren’t crazy in our thinking. We hired a major consultant. We did studies and blind interviews with dealers asking, “If this were available, would you use it?”

We made multiple visits to our biggest customers, such as AutoNation and Lithia, Berkshire Automotive, Group One, the Larry Miller Group. They said, “If you build it, we will come.” We also talked to OEMs because they are an important part of the ecosystem. And we kept iterating on it.

That’s the back story about how this came together.

WardsAuto: What was the purpose of visiting all those dealer groups? To find out if they had similar problems as that dealer with the complex workflow chart?

McDonald: Yes. We wanted their input and buy-in. We pretty much knew they had the same problem, but we wanted to validate that.

Big dealer groups have sophisticated IT people, in many cases formal chief technology officers. Talking to them allowed them to get the concept and think about the use cases.

In launching Fortellis, we wanted to show this isn’t a power-point presentation. It’s a platform that works. We’ve signed up some major companies. It’s here today. It’s open for the developers to come in, register and move forward. The momentum has been overwhelming. We’ve been in lots of OEM meetings. We had a ride-hailing company here today showing an interest.

WardsAuto: What would their interest be?

McDonald: They can speak for themselves but they’ll want to bring experiences to life that dealers can leverage by doing what they do.

WardsAuto: But Fortellis is dealer-centric, right?

WardsAuto: Rajiv Amar, when Brian MacDonald first suggested this, what was your reaction?

Amar: I ran out of the office.

Amar: No. But it wouldn’t have been possible to do this 10 years ago with the technology being what it was at the time.

If you think about the Amazon model. It’s all server-based. It’s a cloud platform.  All you are doing is buying compute, memory or disc space. And everything happens magically behind the scenes because technology allows us to do that.

If Amazon can do that, we can do the same thing for the auto industry. What we do differently is that it’s about experiences. It’s not just putting up a platform. We went as far as saying, “Yes, we want dealers to have that particular experience with the workflows and so forth, but we also want the developers to have a similar experience. It must be intuitive to them when they do what they do to help the dealers.

WardsAuto: Fortellis is two-part, then. It’s simplifying things digitally for dealers and then also enabling developers.

Frey: Because APIs (application programming interfaces) are exposed, a developer can go in and connect the pieces, test them and bring an idea to life.

Amar: A beautiful part of what we built is providing a sample code, saying, “This is how it’s done. This is the standard behind it.” Developers can pick up the code, quickly learn it and cut and paste it into what they want to do for generating a solution.

We also have built-in testing, so you can see how it works. It’s building, validating and testing. Everything is secure and encrypted. We want to protect assets.

Frey: There’s a precedence. Look across other major industries, such as travel and health care. They have platforms that standardize how things connect. You give developers a network to work with and in. Companies show a library of their systems that you can access and connect with.

MacDonald: We keep using the word “experience” because we want to bring experiences to life. Fortellis can bring together four or five different technology providers a dealer may have to in turn give their customers enhanced experiences in buying or servicing vehicles. These are unique experience offerings for individual stores, not the cookie-cutter kind.

WardsAuto: Would the dealer say, “I’ll take, this, this and that digital product”? Would it be like a menu for dealers.

MacDonald: Yes. The possibilities of plug-and-play are limitless. It’s like when the iPhone was created. Who would have thought you could go to the app store and get so much? That’s what Fortellis allows to happen in our industry.

WardsAuto: Would you describe this as the next step, a big step or a mindboggling breakthrough?

MacDonald: I’ll let other people describe it. We’ve heard “game changing,” “huge,” “the biggest step forward in the industry in 10 years, “the No.1 story of NADA.”

Frey: This is not only a solution but an obligation. It’s a platform for the industry that solves some big problems.

MacDonald: We felt we should be the company that does this for the industry, given our size and scale. We spend $200 million a year on R&D. We’re committed. It’s a business opportunity, but it’s also our obligation.

WardsAuto: There’s an old saying, “To whom much is given, much is expected.” Is that applicable here?