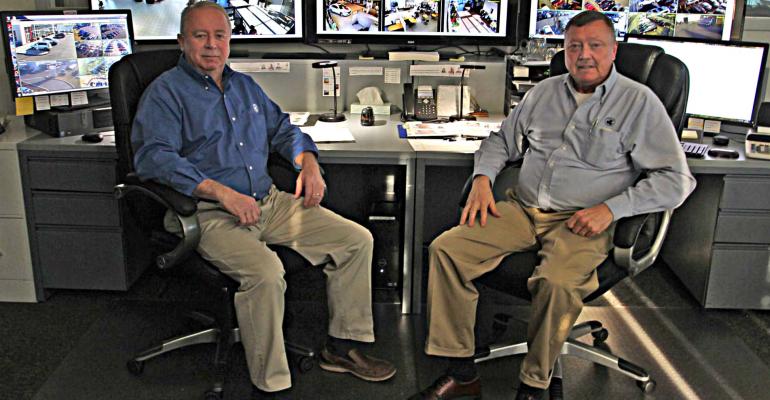 To Catch a Thief or Foil a Hacker

The surveillance technology that could identify someone attempting to steal from a vehicle in a dealer’s back lot also can help identify what areas of a car lot get the most after-hours customer attention.

“We can’t build a fence around our property,” says Dan Moyer, fixed operations director of the 5-franchise Kelly Automotive Group in Emmaus, PA.

“We want our customers to walk the area and look at the inventory,” he says. “But we need to chase off the thieves. We start softer and get more aggressive.”

He recalls a time when a pair of young men hopped the fence of a Kelly dealership storage lot, seeking to cut catalytic converters off the SUVs like they did at nearby dealerships up and down the street.

“Halt. We have you on camera. If you don't leave we will alert the police,” says a disembodied voice from a camera atop a pole.

The youths ambled back over the fence. A hundred miles (160 km) away, a crew of retired military officers monitor nighttime activities at 200 dealerships, including Kelly Automotive’s, in the Eyewitness headquarters in Hanover, MD.

Prior to installing the high-end surveillance system, “our vandalism cost ranged from $20 to $25,000 a year, especially stolen catalytic converters,” Moyer says, adding that the tally is virtually nil now.

He cites added benefits: “Customers appreciate the security protection. They can browse the vehicles and know they are safe.”

Dealerships face a paradox in the retail world. They offer merchandise with price tags up to $100,000, yet they must display the products in plain view.

Even in this day of 3-D imaging, web chats and interactive purchase applications, people want to see a car up close and for real, says Steve Waterhouse, president of the Waterhouse Group, a dealership consulting agency in Orange Park, FL.

“The Internet is a wonderful way to buy a car, but a very poor way to fall in love with one,” he says. “Dealers need the friendliest, most receptive people on staff and a facility that makes it comfortable to visit, even off hours.”

How Surveillance Cameras Can Help Sales

Rush McCloy, CEO of Eyewitness Surveillance, says Moyer is at the cutting edge. He discovered how to monetize his cameras to improve sales and customer satisfaction while reducing loss.

Moyer had Eyewitness install cameras in strategic locations. Once the system was operational he decided to add three more cameras to the drive lane of the service center where a lot of minor vehicle bumps and scrapes ocurred.

Video output could pinpoint how a bang up occurred, could rule out a porter and find the responsible party by license plate.

“The customer might not think he hit the car that hard, but now we have video evidence,” Moyer says.

He hired four people to monitor four, 60-in. (152 cm) TV screens trained on the premises so they can collect traffic counts after major advertising campaigns, and find out what media vehicle draws people in.

People monitoring cameras could study who buys and who walks. Nighttime video could help them identify which corner of the lot draws the most lookers. Vehicles the dealership particularly wants to sell can be put at the high-traffic spot.

Employees are aware of the surveillance system. Are they bothered by it?

“This is a fine line,” Moyer says. “We don't want employees to feel we are looking at them for something wrong, we want to help them sell more cars.”

McCloy works with dealers around the world. He says cameras have caught people who go on a test drive in the daytime, and drive off the lot with a $70,000 car at night after making a duplicate key.

“Most dealers have some cameras, but a high percentage of them are antiquated,” he says. “The aim of today’s systems is to stop crime before it happens.”

High technology also is used to ward off another criminal who could target dealerships: hackers.

That can get a little trickier because the cyber thief doesn’t step foot on the property, says Tim Gallagher, a manager at Nuspire Networks, a data security firm based in Commerce Township, MI.

Nuspire manages more than 1,000 locations for General Motors. Gallagher believes dealerships across America could be a ripe target for cyber theft.

Dealership hackers could go after customer information on such things as financial documents and driver’s licenses.

“Eighty percent of our communications is via Internet, we handle millions of dollars worth of personal information, we have strict protocol for monitoring computers and destroying documents safely,” says Frank Scher, information technology director for the 4-franchise Koeppel Auto Group with Nissan, Volkswagen, Mazda and Subaru stores in Brooklyn and Long Island.

“One of the biggest things we watch is email traffic from China and Russia because it could be bogus,” he says. “We alert Nuspire, and they open a ticket immediately to investigate, confirm or deny a problem.”

The aim of algorithm-programmed systems like Nuspire is to spot lurkers who profile customers and steal vital details.

New policy directs salespeople to store customer driver’s licenses in restricted databases accessible only to the sales manager so the chance of identity theft is minimized.

In the finance and insurance department, at least 85% of the lenders use electronic contracts that are held in cyber space by the lending institution, Scher says.

“We make sure all data entering and exiting the dealership is controlled; that it doesn't all sit in one spot,” he says. “The game gets more intense. We aim to stay on top.”