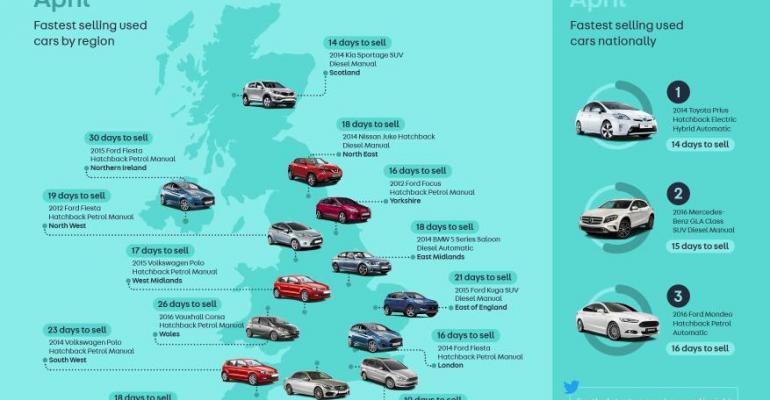 A report from The Work Foundation at Lancaster University points out some 3 million U.K. workers work part-time driving cabs such as the Toyota Prius PHEV.

LONDON – It looks like the U.K.’s “gig” economy is having an impact on the used-car market, pushing the Toyota Prius hybrid to the top of the list of fastest sellers in April.

The ʼ14 automatic version, the urban favorite among almost every Uber and casual working cab driver, took an average of just 14 days to sell, while its ʼ12 manual gasoline sibling stood an average five days longer on the forecourt.

City cabbing has become one of the most popular casual work roles being adopted in a country where 2016 figures from The Work Foundation of Lancaster University suggest 20% of the workforce is in non-permanent employment and 2.5% is earning only from casual “zero hours” contracts.

The report points out some 3 million workers are employed in this fashion driving cabs such as the automatic Toyota Prius.

Used-car research conducted by Auto Trader reveals the Prius, which also topped the sales table in February, was just ahead of a vehicle from the higher end of the premium scale, the ʼ16 Mercedes-Benz GLA diesel manual CUV, which took an average 15 days to sell in April.

Karolina Edwards-Smajda, Auto Trader retailer and consumer products director, says: “2017 has been a strong year so far for Toyota. Both the Prius and the Yaris have excellent reputations for reliability and fuel economy, ensuring a healthy demand in the used-car market and a dependable investment for dealers.

“As we can see from the range of vehicles making up the top 10 lists across the U.K., there remains a healthy demand for all fuel types of used cars.”