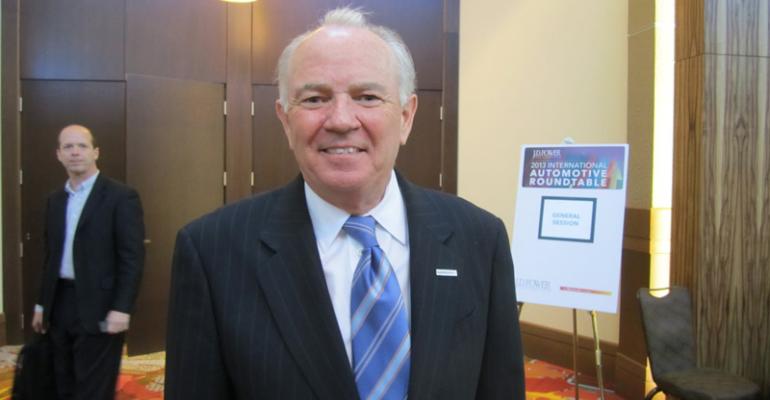 It was 13 years before Mike Jackson believed all the stores had reached a standardized level of customer service and processes.

ORLANDO, FL – AutoNation CEO Michael Jackson says his “dream” to rebrand the chain’s dealerships under one name sometimes felt like a fantasy.

“It seemed like that Notre Dame football player with the fantasy girlfriend,” he says of his long quest to rename all of the firm’s 210 dealerships, except those selling luxury cars, as AutoNation. The initiative replaces regional names such as Maroone, Dobbs and GO.

The name changing was not an overnight effort. It took 13 years, three more than Jackson anticipated, before he thought all the stores had reached a standardized level of customer service and processes.

Those were prerequisites for the rebranding. “I said 13 years ago we could rename AutoNation stores now, but we’d be overpromising and under-delivering.”

The plan included ridding the company of staffers who were “dancing on the tracks or standing on the wrong side of them,” says Jackson, who 15 years ago joined the nation’s largest dealership chain as president.

“We wanted people with an understanding of processes and technology, which can be hard for entrepreneurial-minded people,” he says. “Fifty-percent (of the staff at the time) clearly did not fit the profile we established. If you really want to do something, you have to start firing and then hire to fit your profile.”

Jackson says AutoNation “was like the Wild West” when founder H. Wayne Huizenga hired him as president. “Dealership general managers had authority over accounting. You can really outfox people with that setup. We centralized accounting with a 400-person operation in Dallas.”

He says he told Huizenga: “What you put together is unimaginable, but it’s also unmanageable.”

It took a long time ramping up to the single-name rebranding and all that went with it because, Jackson says, “I’m not a rabbit, I’m a turtle, and proud of it.”

Characteristically, he acts like a tiger at times at the conference, offering a frank take on issues ranging from factory-dealer relations to incentive programs he dislikes.

“OK, I got a big mouth; I call ’em as I see ’em,” he tells the audience when describing his opposition to the way some auto makers overproduced vehicles in the past.

“The manufacturer was telling the retailer what to put on the shelf rather than the other way around,” Jackson says of those former push-production days. “Can you imagine a manufacturer telling that to WalMart? Someone had to step back and say, ‘Hello?’”

Jackson describes current dealer-auto maker relations as improved, but he beefs about some incentive programs.

“The manufacturers preach about the new customer and then they launch stair-step dealer incentives that turn the world upside down,” he says.

Such programs reward dealers for hitting sales targets, but often provide no compensation for retailers that come close. Critics of such plans claim they pit same-brand dealers against each other, drive down transaction prices and hurt customer satisfaction.

“But some manufacturers like that shot of heroin during a sales surge,” says Jackson, who started his automotive career as a mechanic.

He also opposes a practice by some auto makers of directly offering financial incentives to dealership salespeople.

“It is bribing associates to do what the manufacturer wants rather than what the dealer wants,” he says. “It is inappropriate, but I don’t know how to stop it. It’s the same as with stair-step incentives; we participate but I hate it.”

AutoNation expects a banner year as the auto industry grows stronger and the U.S. economy improves.

As they recover economically, “people are saying, ‘I’m moving on with my life,’” Jackson says of consumers reentering the car market. “You have a competent consumer, great financing and wonderful product. I’m 91% happy when I wake up in the morning.”