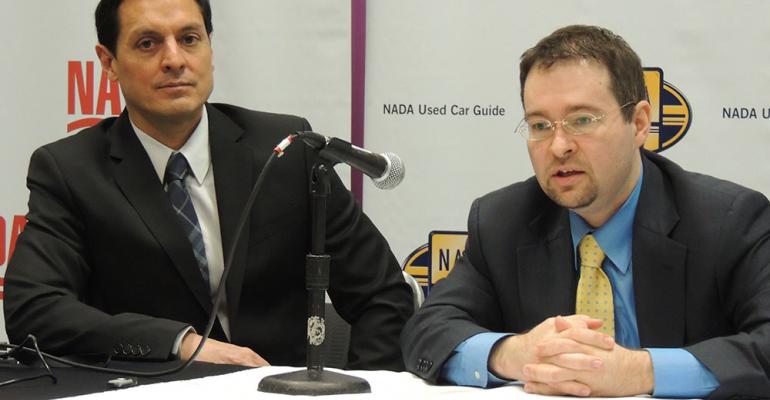 <p><strong>NADA&rsquo;s Banks, Szakaly discuss what to expect in 2014.</strong></p>
Dealers

NEW ORLEANS – Some industry insiders predict automakers will amp up the competition in a heightened effort to move the metal this year, but the National Automobile Dealers Assn.’s chief economist expects production levels to stay under control.

“Overcapacity hurts everyone,” Steven Szakaly says. “If the industry is profitable, dealers will be profitable. At the OEM levels, the feeling is the need for a strong market not dominated by market-share wars.”

But an NADA colleague worries that automakers, armed with arsenals of new products, may give in to temptation and pump up the volume beyond reasonable levels.

“We are seeing more manufacturers talking about volume again, which is a little scary,” Jonathan Banks, the NADA’s executive auto analyst, says at the trade group’s annual convention here.

“You hear Honda talking about it, and you haven’t heard that before,” he says. “But we haven’t seen the domestics focusing on volume as much as profit.”

That wasn’t always the case. Before the recession hit, the industry was rife with over production, causing gluts, dealer beefs and lower transaction prices. Domestic automakers were the main culprits.

Post-recession, auto makers have shown restraint in trying to match supply to demand.

“Three or four years out is when we’ll see a test of manufacturers’ discipline,” Banks says of production schedules.

The U.S. auto industry sold 15.5 million vehicles last year. NADA predicts 2014 deliveries will reach 16.4 million, the first time the industry has passed the 16 million mark since 2007. In 2009, sales had free-fallen to a moribund 10.6 million units.

But that was then. The nation’s economy continues to improve, year by year.

“Consumers will be far better off in 2014 than last year,” Szakaly says. “Employment is improving, debt has been reduced and home prices across all regions of the country will remain stable or will rise, creating a positive wealth effect.”

Such economic improvements are “critical to maintaining the pace of auto-sales growth, which has been an integral part of the economic recovery,” he says.

Banks predicts used-car prices will drop this year, but not drastically. Used-car prices enjoyed a streak, climbing 18% since 2007. But they tapered off last year with a modest 0.4% increase.

A sharp rise in the supply of late-model vehicles, many of them coming off lease this year, is expected to end the long run of annual pre-owned vehicle price increases.

The market will see plenty of late-model used vehicles in 2014, largely because of an 18% surge in off-lease volumes, Banks says.

NADA anticipates the collective average price of used vehicles up to eight years old will fall 0.5% to 1% this year.

The trade organization predicts prices of used vehicles up to four years old will decline an average of 2.5% on an annual basis in 2014. Prices of units from five to eight years in age are expected essentially to remain flat.

Values of 1- to 2-year-old vehicles are expected to drop 2.9%. Fullsize pickup trucks are a bright spot, with pre-owned prices expected to increase nearly $1,000.

“Some people talk about a correction, but we don’t see one,” Banks says of anticipated used-car price declines. “We’re seeing stability based on supply and demand.”