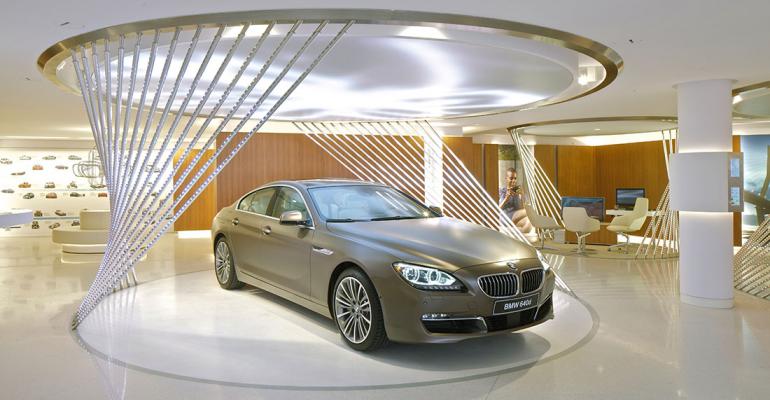 Automakers Push for Showroom Overhauls, and Dealers May Reap Rewards

OEs are pressing for more than brick-and-mortar changes and modern d&eacute;cor. They want showroom culture to evolve as well, and evidence suggests dealers who follow these new employee/customer roadmaps will be rewarded.

NEW ORLEANS – Automakers want new-vehicle showrooms that are better places to work, transparent in their practices and more customer-friendly overall, and data compiled by the National Automobile Dealers Assn. suggests dealers would benefit from forging such a transformation.

Car makers, from top-end luxury brands to mass-market marques, say it’s time for a cultural overhaul in the way new cars are sold and serviced, citing the shift toward technology-laden vehicles and Internet-savvy shoppers who abhor high-pressure sales tactics and come through the door armed with detailed product and pricing information.

They also want sales and service employees to be better-engaged in their jobs, because understanding and supporting the dealer’s mission to serve customers translates into higher sales, better profit margins and increased brand loyalty among consumers, say industry insiders at last weekend’s 2014 NADA Convention and Exhibition here.

More Gen Y buyers are entering the market, says Thomas King, senior director-consulting for J.D. Power, noting this group is “the most sensitive to new technology and digital (marketing).” The demographic is expected to account for 3.3 million new-vehicle sales this year, up from 3.0 million in 2013 and 1.9 million in 2007, King says.

Among initiatives meant to appeal to this group are BMW North America’s “Future Retail” program that is placing Apple-like product specialists, called Geniuses, in showrooms to guide customers through a growing array of models and high-tech options, and a Ford project that puts dealers in touch with “coaches” who help them reshape work practices and build a more collaborative work environment from the back office to the service bay.

“Customers are better informed than ever, and they expect a similar level of knowledge from the sales staff,” says BMW North America CEO Ludwig Willisch. “They want a stylish and inviting retail environment. The presentation must be a quick and informative experience, and no pressure. Younger customers are attracted to our products, and they no longer accept business as usual.”

“If we don’t get the culture right, we’re not going to succeed,” she says.

Resistance May Not Prove Best Strategy

Some retailers continue to resist OE demands, including a few BMW dealers who reportedly would rather sell their stores than commit to a mandatory upgrade that collectively will cost $2.5 billion.

But a NADA-backed annual study of dealership salaries and employment issues, now entering its third year, suggests a financial reward awaits those willing to take these leaps of faith.

Ted Kraybill, president of ESiTrends, the consulting firm that compiles the “Dealership Workforce Study Industry Report” for NADA members, says there is a close relationship between sales-staff retention, customer satisfaction and showroom profitability.

“Manufacturers are really focusing on employee retention and employee engagement, because there’s so much information that shows…there’s a direct correlation between the 3-year retention rate of sales people…and higher J.D. Power scores on satisfaction,” he tells WardsAuto in an interview.

Employees who are more vested in the store’s mission and satisfied with their jobs also are likely to stay. And the more experienced the staff, the more productive, which could have a big effect on a dealership’s bottom line.

“We have the data that show…if you have 70% retention (compared with a 50% norm), you can have two points higher gross profit as a percent of sales,” Kraybill says. 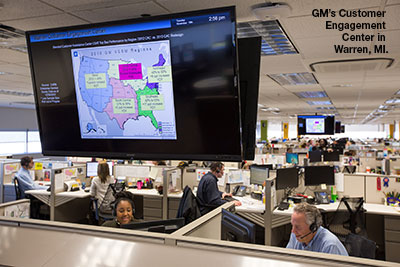 Better work environments could mean retailers would have to pay above-average rates to attract new employees, he says. Dealerships average $2.7 million in payroll, about 61% of total expenses of $4.4 million.

“I can’t tell you how many times I’ve talked to dealers and (human-resource) managers who are frustrated they can’t find people to even pass a drug test in some markets.”

Traditional showroom culture is making it tough to recruit and retain staff. Today’s growing Gen Y workforce demands a better work-life balance, Kraybill says. But too many dealers are resistant to flexible work hours and refuse to allow sales staff to operate from home when possible, such as when chasing down Internet sales leads or setting up appointments with potential buyers.

“The days of working bell-to-bell and putting in 70 hours a week on the sales floor…the young employees coming in are saying, ‛That’s ridiculous.’”

Many employees leave because, like customers, they are uncomfortable with the high-pressure sales tactics and other questionable practices they encounter, he says.

Taken as a whole, dealership turnover isn’t that bad, the ESiTrends executive says, and it has been improving in the last couple of years as the industry has emerged from the recession. About 35% of dealership employees leave each year, compared with a 41% turnover rate in the private sector.

But turnover runs a whopping 63% on the sales side, Kraybill says, emphasizing experience and retention “is what drives productivity and dealer profits.”

Jim Farley, Ford executive vice president-global marketing, sales and service and head of the Lincoln brand, says his company’s retail-retooling effort has been well-accepted by dealers, and those following the game plan are posting nearly 5% better returns and scoring higher in customer satisfaction and loyalty.

Ford co-created its “Consumer Experience Movement” program with dealers four years ago, concluding buyers would be more satisfied with the brand if they were more “engaged” in the sales process. And engagement, which Ford sees as translating into word-of-mouth recommendations and positive social-media chatter, will increase if customers find dealership employees are fully vested in their jobs.

Participating Ford retailers in the U.S. have seen a 2.1% gain in customer-satisfaction scores in both sales and service, return on sales has increased 0.4% and service loyalty has jumped 3.7%, Elena Ford says.

The automaker’s multistage process begins with an internal survey to ferret out employee attitudes about their jobs and co-workers. That is followed by a third-party analysis of the operation and, finally, coaching from an independent expert chosen by the dealer from one of two companies contracted by Ford. The automaker won’t say what the program costs to implement, but says it splits the tab evenly with the dealer.

“These are hard things to do,” John Leeman, a megadealer with Ford Retail U.K, says of the self-examination process that can be uncomfortable for employees and dealers alike. “It has caused shock, denial, and then you go through an acceptance curve. It gets people to work together.”

Canadian dealer Ron Loveys, of Whiteoak Ford Lincoln, agrees. “It’s a shock-and-awe thing. But we see it as an opportunity.” 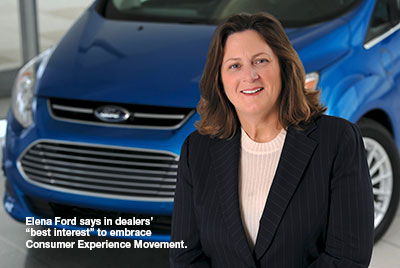 Even those employees who come under fire from the process “just wanted to do better,” Loveys says. “We have not lost a single employee.”

In fact, it’s just the opposite, Elena Ford says, citing results in Canada, where sales staff turnover has dropped to 34% for dealers following the program, compared with a 40% average overall.

“We’re seeing lower turnover in the U.S. too,” she says, though hard data isn’t available yet.

Ford officials and dealers here aren’t specific about the types of changes made, because the program is worldwide and issues differ from dealer to dealer and country to country.

But a common theme is the evolution into a more collaborative, interdepartmental approach to managing day-to-day operations, all focused on what’s best for the customer.

“Leadership is more of a team now; it’s less about individual units,” says Brian Godfrey, general manager at Pat Milliken Ford in Redford, MI. “We’re more open about what the issues are, and we work as a group toward one goal: taking care of the customer.”

The program has transformed the dealership’s hiring process, Godfrey says. “We now look for people that will fit into this new culture.”

The program is voluntary, and while Ford has 1,000 dealers participating worldwide, including 600 in the U.S., there are many who still resist.

“That’s OK,” Elena Ford says. “They may have other priorities at the moment. And the dealer or the general manager really has to believe in the Consumer Experience Movement. If his energy isn’t in it, he shouldn’t be doing it.

“But it is in their best interest to embrace it.”

Kraybill agrees the OE programs are on the right track, specifically when it comes to adding product specialists inside and outside of showrooms, such as BMW and GM are doing. People want to learn new skills and feel as if they’re climbing the ladder, so a structure that lets employees come in as product specialists and advance toward full sales positions gives them a sense of a career path and decreases turnover, he says.

“That’s the way you’ll see the industry start to move. People like BMW are going to start to push it.”