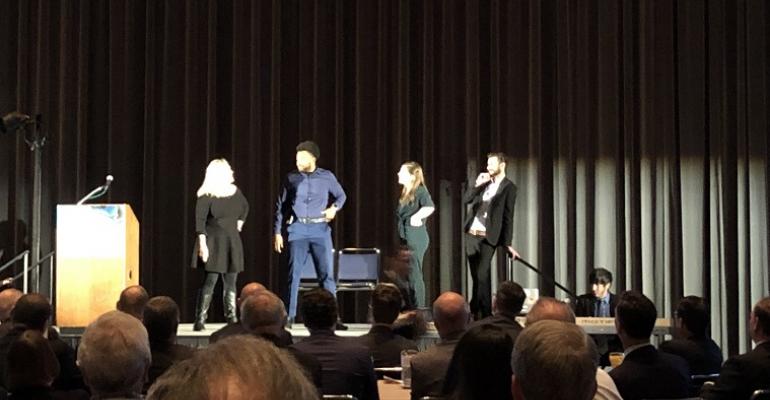 Kia Motors America Chief Operating Officer Michael Cole had been scheduled as an event’s keynote speaker, but he had to cancel.

CHICAGO – Who do you get to fill in when an auto executive, billed as the featured speaker at an event kicking off a major auto show, can’t make it after all?

In Chicago, you bring in performers from Second City, an iconic comedy club here. Alumni include Bill Murray, Gilda Radner and Stephen Colbert.

Members of the current troupe do skits and audience-participation improv at the Midwest Automotive Media Assn.’s Chicago Auto Show breakfast, not a typical venue for nightclub performers.

“There’s no better time to do comedy than 8:30 in the morning at a business breakfast,” one of them quips.

Kia Motors America Chief Operating Officer Michael Cole had been scheduled as the keynote speaker. But James Bell, Kia’s communications director, takes the stage instead. He explains Cole is otherwise engaged at a dealer-network road show.

Bell talks about this and that, including Kia’s new tagline, “Give It Everything.”

He shows the Kia Telluride CUV commercial that aired during this year’s Super Bowl. It features a 10-year-old farm boy “who didn’t realize he was going to be the star of the spot until just before it ran,” Bell says.

Kia has come a long way since entering the U.S. market in 1994 selling a single econobox subcompact of dubious quality at a lone dealership in Portland, OR.

Now, the South Korean automaker has a wide U.S. lineup and a national dealership network. In 2016, it was the first non-luxury brand since 1989 to rank No.1 in J.D. Power’s annual vehicle-reliability list.

“Kia?” says a Second City performer. “Isn’t that for people who get a used-car with a new-car smell?”