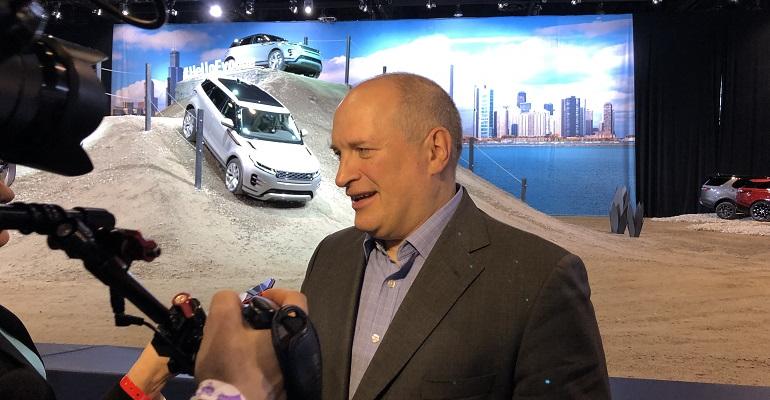 Nothing Like an Auto Show Debut to Cheer Things Up

CHICAGO – The auto industry faces “economic headwinds” – such as Jaguar Land Rover declaring a big loss – but on the upside “nothing tops bringing out new vehicles,” says Joachim Eberhardt, who heads the automaker’s North American unit.

“It’s my favorite part of the job,” he says while introducing the second-generation Range Rover Evoque compact SUV at the Chicago Auto Show.

The ’20 model makes a dramatic entrance by climbing up and down a hilly mini- offoad course JLR has carved out of a corner of the show’s exhibition hall. Attendees during this week’s public days can take vehicles for a spin on the track.

The new Evoque stands out because of its “reductionist” exterior design, JLR says.

Interior features include new eucalyptus-based textiles. It’s roomier than the model it replaces.

JLR is committed to electrification, Eberhardt says, adding that by 2020 all of the company’s models will include some form of it.

Introducing the new Evoque in Chicago makes sense because “it is a core city for us from a business perspective,” he says. “The new Evoque speaks to an urban customer, offering practicality and functionality.”

The model goes on sale this spring at a base price of $42,650. The sticker for the top-of-the-line model with the MHEV propulsion system is $55,800. Two-thirds of Evoque buyers are women, reflective of the overall compact SUV segment, says Eberhardt.

Eberhardt previously held executive positions at Daimler and the now-defunct Daimler Chrysler. He playfully describes himself as a German who is the president and CEO of North American operations for a U.K. automaker that’s owned by an Indian company (Tata).

He speaks with Wards after the Evoque debut. Here’s an edited version of the Q&A.

Wards: You talked about the coming age of electric vehicles that now make up less than 2% of the U.S. market. When do you think EVs will gain more sales traction?

Eberhardt: We don’t know what’s going to happen, so it’s difficult to forecast how it is going to affect us.

If there were a hard Brexit, it would have a significant financial impact on the company to the tune, we think, of about £1 billion ($1.28 billion). We are hopeful there will be some sort of deal because we and a lot of other British companies depend on free trade and a frictionless flow of products. The hope is there will be a solution.

Wards: JLR declared a £281 million ($361.4 million) operating loss for the third quarter. Does that have anything to do with Brexit?

Eberhardt: No, it’s from a combination of things. Like a lot of other companies, we’ve faced significant headwinds in China. The market there has slowed down dramatically. A lot of our sales are there.

Secondly, diesel is an issue across the globe, and we’re particularly impacted by that in Europe and the U.K. where a lot of our sales were diesel-related. So that’s a big element.

And then just in general, the overall economic environment is getting more difficult.

But we are addressing it proactively. We have a short-term transformation program called Charge and a longer-term transformation program called Accelerate with a goal to take £2.5 billion ($3.2 billion) in costs out of our system. (The company has axed more than 6,000 jobs and put 1,000 of its U.K. workers on a three-day workweek as part of the belt-tightening.) We’re addressing the challenges.