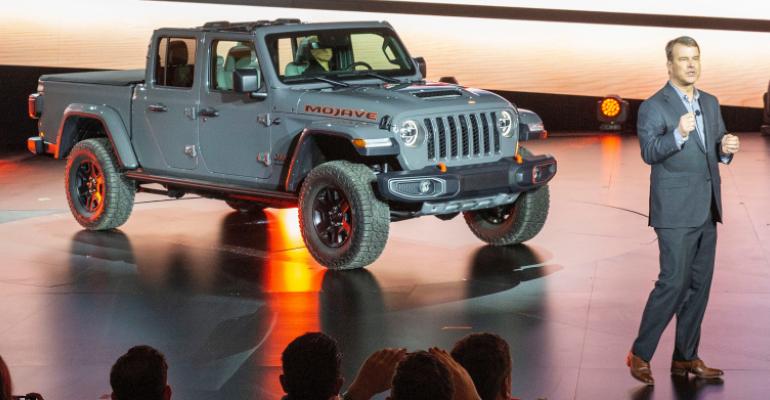 “It has the mechanics to master desert terrains at high speeds,” Jeep’s Jim Morrison says at the Gladiator Mojave’s Chicago Auto Show debut.

CHICAGO – On a snowy day here, Jeep unveils a new spinoff model for desert rats who like to hightail it: the ’20 Gladiator Mojave midsize pickup truck.

It is the first Desert Rated Jeep. The FCA brand extols it as the ultimate vehicle for fast off-roading in the sand.

“It has the mechanics to master desert terrains at high speeds,” Jim Morrison, head of Jeep in North America, says at its Chicago Auto Show debut.

To attain the automaker’s desert-worthiness rating, the Gladiator Mojave, among other things, had to demonstrate control, stability, traction and ground clearance in sandy terrain.

The new Jeep is modified to go up to 50 mph (80 km/h) in low gear. “We’re talking about performance in the sand,” Morrison says.

Other enhancements for sand-dune climbing and desert driving include a best-in-class approach angle of 44.7 degrees, breakover angle of 20.9 degrees, departure angle of 25.5 degrees and a best-in-class ground clearance of 11.6 ins. (29 cm).

If it were legal to drive vehicles on this city’s sandy Lake Michigan shoreline, the Gladiator Mojave might be a hit here. But sales are expected to concentrate in places such as California, where the Mojave Desert attracts plenty of off-roaders.

Jeep introduced the Gladiator last year and it’s riding a wave of popularity. The Mojave model goes on sale this spring. A pricing announcement is pending.

Who will buy it?

“People who are buying Gladiators today and modifying them for off-roading in the sand,” Morrison tells Wards.