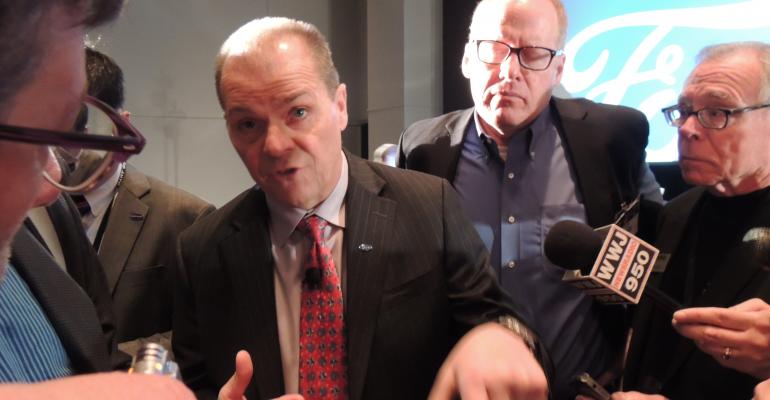 It&rsquo;s not true that Millennials don&rsquo;t want to own vehicles and that SUV popularity relies heavily on low fuel prices, says Mark LeNeve.

The first is a popular misconception that Millennials aren’t interested in buying vehicles. The second is that today’s fast-paced SUV sales depend heavily on low fuel prices.

Going after both popular claims is LeNeve, Ford’s vice president-marketing, sales and service. He does so at a media breakfast at the Chicago Auto Show.

He also announces Ford’s plans to add four all-new SUVs to its global lineup in the next four years to fill in gaps. He doesn’t get specific about products to come.

Ford’s biggest need seems to be an entry-level player in the hot compact CUV segment. Currently Ford’s core SUV/CUV products are the Escape, Edge and Explorer.

“So we sold more outside the U.S. than in the U.S., which is a fascinating statistic because many people think SUVs only are popular here,” LeNeve says.

On the subject of many young people allegedly feeling the need to skip vehicle ownership in favor of transportation services such as Uber to get them around, LeNeve says, “To paraphrase Mark Twain, the death of the Millennial buyer is greatly exaggerated.”

Millennials tend to marry later, have children later, “and, yes, get driver’s licenses later, but they do eventually get there,” he says, citing his son as an example. “Drew is 22, just got his license and bought a Ford Escape (midsize CUV). I’m very proud of him.”

LeNeve says Millennials and aging Baby Boomers account for much of the impetus behind today’s hot SUV sales. He cites Ford research indicating that when Millennials begin thinking about starting a family, their interest in shopping for SUVs shoots up.

Because of improved engines, today’s SUVs get much more fuel efficient than their predecessors, he says, noting the Explorer’s combined economy of 22 mpg (10.7 L/100 km).

But relatively low gasoline prices of late play a minor role in SUV popularity, he says. “Low gas prices are just a minimum part of the equation.”

But if pump prices were to spike to startling levels, would SUV sales suffer in kind?

“Fuel prices eventually will go up, but if it happens to that extent, we think people will shift to smaller SUVs, not away from SUVs completely,” LeNeve tells journalists after his keynote speech, adding, “We don’t see SUV growth as a short-term trend.”