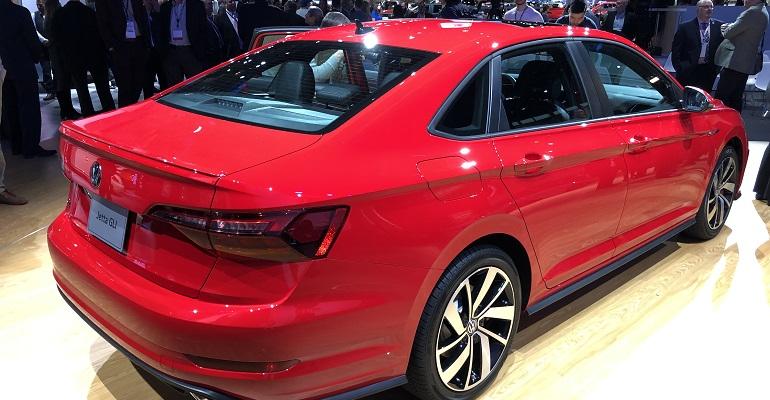 2019 VW Jetta GLI Gets Closer to Its Golf GTI Cousin

The sixth-generation performance sedan “has the heart and soul” of a Golf GTI, VW says.

Volkswagen says it has redone its performance-oriented ’19 Jetta GLI to cater to more American buyers. The compact sedan now also has more in common with its quick cousin, the Golf GTI hatchback.

Moreover, the two pocket rockets now share the same platform, with the Jetta GLI moving over to VW’s MQB architecture that underpins the Golf GTI and other VWs globally.

“The underpinnings are much more comparable to the GTI than they have been in the past,” Derrik Hatami, Volkswagen of America’s executive vice president-sales and marketing, tells Wards at the Chicago Auto Show debut of the sporty new Jetta. It is “particularly more tuned as a performance model than have been the ones in the past.”

The sixth-generation Jetta GLI “has the heart and soul of the GTI,” VW says.

Hatami waves off the possibility of the GLI sedan and GTI hatchback competing against each other now that they have more in common.

“There will be a bit of an overlap, but there’s potentially more volume within the compact sedan segment,” he says. “There are more people in that segment than in the hatchback segment.”

Jetta GLI buyers “definitely” skew towards young males of a certain affluency and higher education, Hatami says. “We see that as the continued buyer of this car. And we’ll see more of a performance enthusiast for this car than we’ve seen in the past. We see a lot of potential in this segment.”

An electronically controlled limited-slip differential is standard, and adaptive dampers are optional. The braking system is shared with the GTI, with 13.4-in. (34 cm) front rotors and red-painted calipers.

Giving it a more planted appearance, the car sits 0.6 ins. (1.5 cm) lower than the regular Jetta.

Shared with GTI, the engine features variable valve timing on the intake and exhaust sides, as well as variable exhaust valve lift. The engine mates with a 6-speed manual or an optional 7-speed dual-clutch automatic transmission.

A 35th Anniversary Jetta GLI model features a noir motif. That includes black wheels with a red stripe, a black roof, black mirror caps, black tail spoiler. Commemorative-anniversary badging is inside and out.

“I think the 35th anniversary edition will sell out rapidly,” Hatami says. It and two other trim levels of the GLI arrive at dealerships in the spring.

The German automaker builds the Jetta, its U.S. best-seller, in Pueblo, Mexico.

Of the 354,064 vehicles VW sold in the U.S. last year (a 4.2% increase over 2017), 90,805 were Jettas (a 21.6% decrease), according to Wards Intelligence. The GLI accounted for about 5% of those deliveries, Hatami says, noting the recently introduced Atlas and Tiguan CUVs lead the way in a market that has pivoted away from cars.