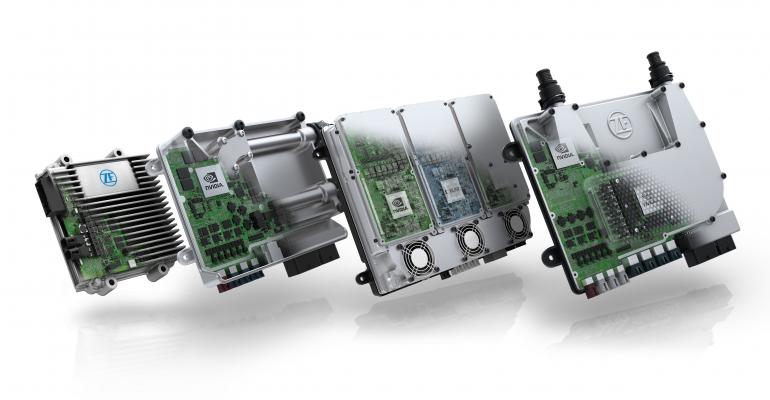 The latest version of ZF’s ProAI domain controller technology is up to 600 times more powerful than the first-generation system unveiled just two years ago.

LAS VEGAS – Top executives at German auto supplier ZF say the company has jumped to the front of the pack when it comes to development of a high-powered computer to govern the operation of autonomous vehicles.

The proof? The unveiling at CES 2019 of RoboThink, the fourth-generation and by far most powerful of its ProAI autonomous-vehicle domain controllers, and announcement here of its close collaboration with chip supplier and artificial-intelligence leader NVIDIA.

ProAI first rolled out at CES in 2017 and already the latest version is up to 600 times as potent as that Gen 1 system.

ZF says ProAI is the only automotive-grade AI-capable supercomputer that can meet NVIDIA’s timeline for launch of DRIVE AutoPilot, an open, modular artificial-intelligence platform for automated driving from Level 2-plus (with first applications expected next year) to Level 4.

“We are taking advantage of the fact that ZF offers a supercomputer that is ready for volume production,” ZF CEO Wolf-Henning Scheider says of being named a preferred supplier by NVIDIA, noting a Gen 3 ProAI controller launches later this year in autonomous cargo-delivery vehicles to be produced in a joint venture with German startup e.GO Mobile.

“We’re way past the development stage,” he adds. “We’re now leading the industry in this supercomputer (space).”

Many traditional automotive suppliers and tech upstarts are working on domain controllers designed to gather information from onboard vehicle sensors, crunch that data to determine the path forward for the vehicle and then control the key operating systems, such as the accelerator, brakes and steering to move the vehicle ahead. Among these suppliers are Aptiv, Aurora, Bosch, Magna, Valeo and Visteon.

But Scheider says RoboThink’s ability to process up to 600 trillion operations per second (TOPS) gives ZF a leg up on its competition.

RoboThink is a modular system, with a single unit capable of 150 TOPS. Up to four RoboThinks can be daisy-chained together for output of 600 TOPS.

That peak power compares with just 1 TOPS for the Gen 1 ProAI, up to 25 TOPS for Gen 2 and 90 TOPS for Gen 3, so the top-end RoboThink package – equivalent to the power of 120 high-end smartphones – represents a giant leap forward.

RoboThink will handle Level 4 autonomous vehicles (self-drivers that operate within a geofenced area), such as those in development with e.GO Moove, and ultimately go-anywhere Level 5 vehicles. But ZF officials do not believe Level 5 is in the cards medium term.

Scheider says Level 3 vehicles (highway pilot) will hit the market in the 2019-2020 timeframe, with Level 4 vehicles taking hold in the next two or three years, adding there should be at least 1.5 million new Level 4 robotaxis on the road within five years.

ZF will offer its entire line of ProAI controllers, from Gen 1 through Gen 3 and the new RoboThink, allowing automakers to select the most cost-effective module for the application. A RoboThink module is estimated to cost 10 to 15 times the entry-level Gen 1, aimed at more basic advanced driver-assistance system technology and compatible with all 2022 NCAP testing standards.

The supplier expects most of its ProAI business over the next three to five years to revolve around the Gen 2 (Level 2 and early Level 3) and Gen 3 (Level 4) technology.

Scheider is vague about when investment in ProAI will pay off to the bottom line but says ZF already is making money on many of the autonomous-vehicle building-block technologies.

“Today we have significant ADAS business,” he says, noting ZF is the world leader in onboard camera systems and has a growing stake in radar and lidar technology.