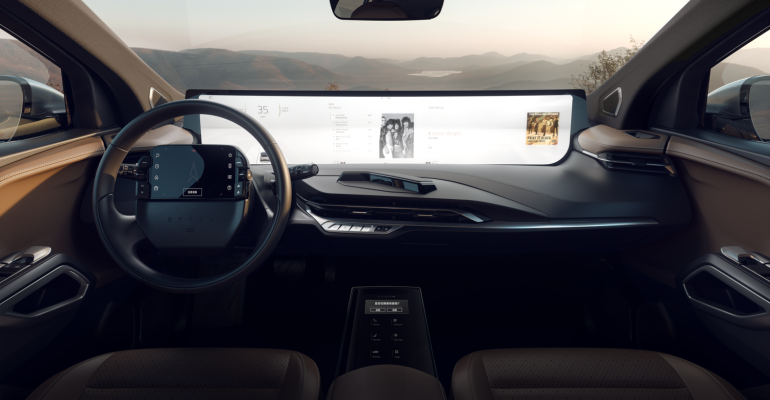 The first Byton M-Byte Concept is a premium midsize battery-electric SUV expected to go on sale in China by the end of 2019 and in the U.S. and Europe in late 2020. Starting price will be about $45,000.

LAS VEGAS – Showing off wild electric vehicle prototypes is becoming a tradition at the annual CES show here, but EV startup Byton is giving the ritual a new twist by emphasizing interior design and user experience over traditional automotive metrics such as acceleration and performance.

“Byton’s M-Byte represents the transformation of the traditional car into a next-generation smart device for every user,” says Carsten Breitfeld, CEO and co-founder of Byton. “We achieve this through the combination of our state-of-the-art EV platform and our proprietary Byton Life digital ecosystem.”

The centerpiece of the vehicle’s interior design philosophy is a huge 48-in. (122-cm) wide “shared experience display” that stretches from A-pillar to A-pillar and is claimed to be the largest for a production vehicle.

Company officials say the position of the display has been carefully developed and tested to not affect driver line-of-sight and will meet all safety and crash standards in all target markets.

Since the concept was first shown last year at CES, designers have added a stationary touchscreen in the steering-wheel hub, mounted directly above the driver airbag, and another interactive screen is positioned on top of the center console for the passenger.

Despite all the interactive screens, gesture controls and incorporating Amazon’s Alexa into many infotainment functions, the car still features some hard buttons and conventional stalks to operate things such as the windshield wipers. Benoit Jacob, vice president-Design, tells reporters at CES that some conventional controls simply are the most intuitive for some functions.

And this reflects the prevailing philosophy in automotive UX design circles. That’s why volume knobs and big buttons for climate-control functions are reappearing in many vehicles.

Byton plans to manufacture three new models based on its Smart EV Platform, including an SUV, a sedan and crossover. All three vehicle names will be derived from the word “Byte.”

The first model, the Byton M-Byte Concept, is a premium midsize battery-electric SUV that is expected to go on sale in China by the end of 2019 and in the U.S. and Europe by Q3 2020. The starting price will be about $45,000 in the U.S., company officials say.

Byton is headquartered in Nanjing, China, which also is home to its manufacturing base and one of several major R&D centers around the world.