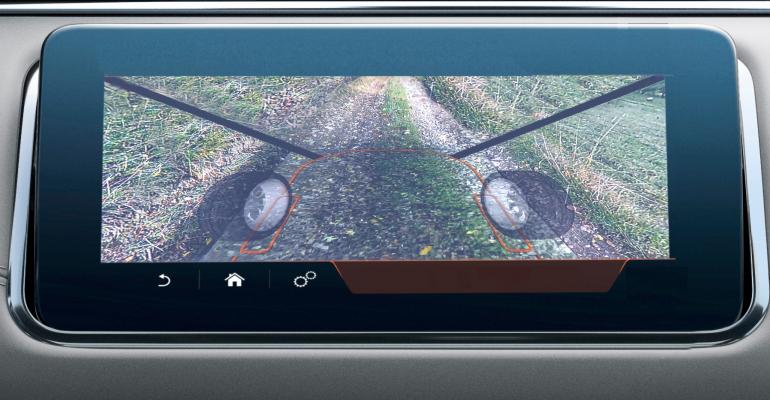 A concept “transparent hood” makes the front end of your vehicle seem to disappear, as if you’re looking straight at the ground.

LAS VEGAS – Continental AG joined a bandwagon of camera-based innovations from several rivals, aimed at making visual obstructions, including parts of your own vehicle, seem to disappear.

In Continental’s case, its potential “transparent hood” feature makes the front end of your vehicle seem to disappear, as if you’re looking straight at the ground between the still-visible front wheels.

The idea is for very-low-speed, off-highway driving, where drivers sometimes have to pick their way over boulders, hummocks or logs.

“That’s magic, isn’t it?” says Dirk Abendroth, CTO of Continental Automotive, in a press conference at CES 2020 here. “It feels like Harry Potter’s magic cloak, where he can make everything transparent.”

The Continental system uses “time-mixed” images from front- and side-facing cameras, to merge an image of real-time views with a view of ground the vehicle already passed over.

The effect is the illusion that the viewer is looking straight through the hood and everything underneath it. An enhanced-reality animation of the front wheels remains visible, showing the steering angle and position of the wheels.

Meanwhile, French supplier Valeo is the supplier for a feature General Motors already offers on some full-size pickups that seems to make a trailer disappear. It combines images from multiple cameras, including a rear-facing camera on the back of the trailer.

Mirror supplier Gentex Corp. introduced what it calls its Full Display Mirror back in 2016, starting with the Cadillac CTX.

The feature replaces the mirror image in the interior rearview mirror with a video feed from a rear-facing camera outside the vehicle. The visual effect is to make anything in the back seat blocking the view disappear.