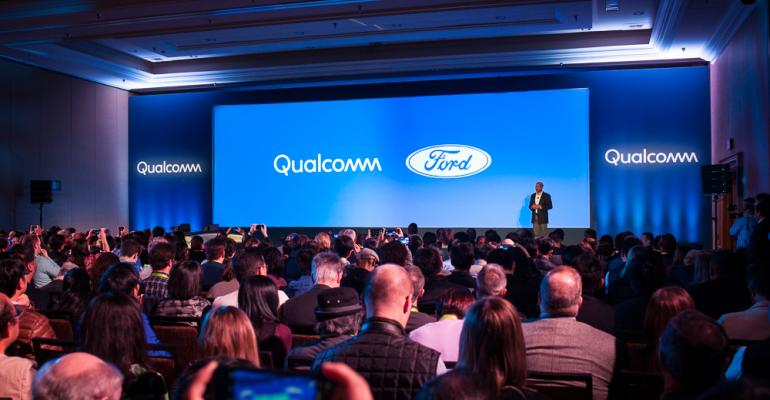 Ford and Qualcomm are partners in C-V2X development.
Vehicles

In a tech face-off some say resembles the epic VHS vs. Betamax rivalry, automakers and suppliers such as Qualcomm are picking sides on a key vehicle communication format.

LAS VEGAS – On the first day of the giant CES electronics trade show here, Ford very publicly committed to deploy cellular vehicle-to-everything technology (C-V2X) in all its new vehicle models in the U.S. beginning in 2022.

The move puts it at odds with many of its automotive rivals who favor a more established connected-car technology known as dedicated short-range communication (DSRC).

It is a technology they deem superior in part because, unlike DSRC, it is highly compatible with the upcoming 5G mobile communications technology which is much faster than today’s 4G.

“Planned alongside the rapidly building 5G cellular network, C-V2X enables direct communication between the connected devices, meaning a signal doesn’t need to first travel to a cellular tower, allowing vehicles to quickly send and receive information,” Butler says. “Ultimately, it lets drivers know what’s ahead of them even before they encounter it.”

To underscore their unity and the maturity of the relatively new C-V2X technology, the companies hosted a demonstration featuring a Ford F-150 pickup, an Audi crossover and a Ducati Multistrada motorcycle where reporters including WardsAuto were invited to experience the benefits of C-V2X communications in various driving situations.

All vehicles were equipped with C-V2X technology using a Qualcomm 9150 C-V2X chipset to demonstrate how the communication format can simplify complex and sometimes dangerous traffic situations, such as negotiating the right-of-way in entering a four-way intersection with no traffic signal, further complicated by a motorcycle choosing to ignore the other vehicles and speed through the intersection.

Vehicle-to-vehicle, vehicle-to-pedestrian and vehicle-to-infrastructure safety scenarios also were demonstrated. The V2V use case featured the Intersection Movement Assist scenario, which is a key countermeasure to address angle collisions at intersections, while the V2P scenario exhibited how C-V2X can be used to protect vulnerable road users, including pedestrians and bicyclists.

The V2I use case featured the Work Zone Warning scenario, which is designed to provide drivers advanced warning of road construction ahead, allowing them to maneuver in a safe manner.

The C-V2X technology eliminates confusion at the four-way stop by notifying each car when it is their turn to move and makes each driver aware of the speeding motorcycle even if it is not in the driver’s line of sight, essentially allowing drivers to see around corners.

“Imagine a person suddenly steps into the street from out of view and your vehicle stops because it was alerted by that person’s smartphone. This is just one example of how C-V2X can connect smart vehicles to a smart world,” says Ford’s Butler.

“This demonstration is showing use cases in which advanced technologies can significantly improve the safety of motorcycle users,” says Pierluigi Zampieri, vehicle innovation manager-Ducati Motor Holding.

Says Anupam Malhotra, director-Connected Vehicles & Data, Audi of America: “Audi has demonstrated a novel C-V2X use case together with Ford, Ducati and Qualcomm Technologies. The four-way stop use case provides a glimpse of how cooperative driving will be possible with C-V2X in the future. Besides additional safety, C-V2X is designed to also improve comfort and efficiency, which can be applied to both current and future autonomous driving.”

Adds Butler: “We invite other automakers, governments and tech companies to join the significant momentum building for a C-V2X ecosystem.”

Of course, many are not yet ready to make the leap. DSRC has been in development for 10 years and is well proven. Some also downplay the idea an epic battle is brewing between C-V2X and DSRC along the lines of VHS vs. Betamax. Both systems can coexist on vehicles and in the environment.

But Jim Misener, senior director-Technical Standards at Qualcomm, says the VHS vs. Betamax comparison is not unfounded. Building vehicles that can accommodate both C-V2X and DSRC technologies is possible, but that strategy will add cost and complexity. And that will lead automakers to ultimately pick one, he says.