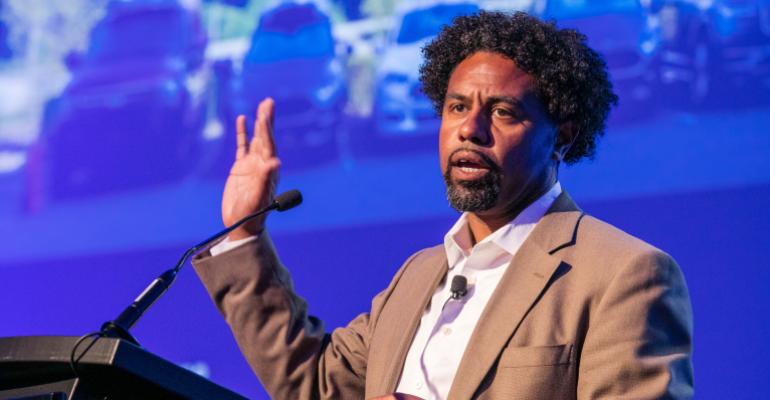 The ride-hailing company continues development work on autonomous vehicles it considers its future.

TRAVERSE CITY, MI – Last year, an Uber autonomous test vehicle fatally injured a pedestrian who stepped in front of it in Tempe, AZ.

The backup human test driver didn’t react in time. It was the first pedestrian fatality involving a self-driving vehicle. It prompted some people to suggest that such vehicles had no business on public streets. It was enough to drive Uber out of Arizona.

Nevertheless, Beuse has lessons to share that the company learned from the accident.

“The perception is we were doing something way crazy,” he says of circumstances surrounding the fatality. “If you read the internal review, it says otherwise.”

“We shared with the entire industry the contents of our internal reviews,” he says during a session on connected and autonomous vehicle-technology development.

Rebutting misperceptions, he adds, “Self-driving test vehicles are not running around on public roads. People think there are thousands when in fact there are about 1,000 in total” among the various entities testing experimental autonomous vehicles.

The accident did lead Uber to put greater emphasis on training the personnel who are in the prototype self-driving vehicles during the testing.

“It is an awesome responsibility to be operating this machine,” Beuse says, although the “drivers” typically aren’t driving the autonomous vehicles, but instead serving as backups. “We’ve improved the safety culture of the company.”

Uber has changed the title of such test drivers to “mission specialists” to better convey the importance of the job, he says.

Despite the accident, Uber sees autonomous vehicles as the ride-hailing company’s future.

Beuse says Uber still has no plans to manufacturer its own AVs. Instead, it is developing safety technology for vehicles built by automakers. The Arizona fatality involved an Uber-equipped Volvo.

Uber is trying to overcome negative public reaction that stemmed from that accident.

The company has “pushed most of our development off public roads” for the time being, Beuse says, adding: “Self-driving will only work if it is safe and increases mobility. No one will get in (an autonomous vehicle) if they don’t think it is safe. You don’t design a system and say, ‘I hope it works.’”