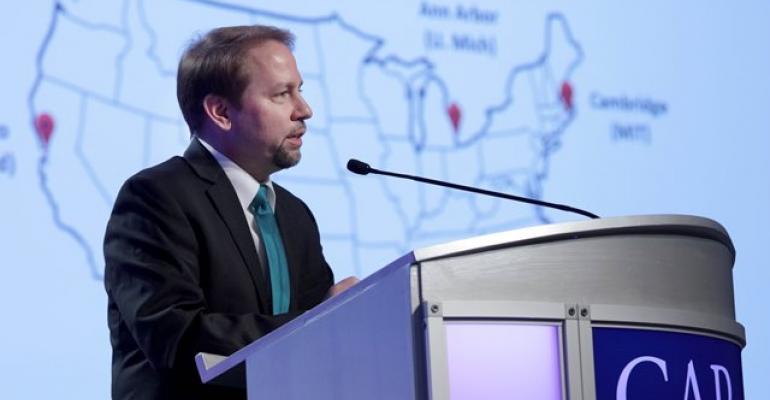 Silicon Valley has a lot of the crucial ingredients needed to make the next technical revolution happen, but the formula certainly can be replicated elsewhere, says the automaker&rsquo;s chief technology officer.

“I would like to argue the most complex thing that humans can create is a robot, and that includes autonomy in vehicles as well. It is a superset of a computer connected to a mechanical system where you have power and you have friction, energy, and uncertainty and sensing.

“Now that we have rapid advancements in sensing, actuation, cloud computing and machine learning, it’s hard to predict when it’s going to happen, but I think it will be a major disrupter,” he says, pointing out it took about 30-40 years for those earlier technologies to really begin impacting society.

“I’m a proponent of cloud robotics: The idea is you can have a machine that has onboard computing and memory and storage and sensors, but it also has a connection to a data center. It’s like having a brain that is remote, that is able to use and access (more) computing power and data resources in order to provide some value and utility.”

Combining the intelligence and power of the cloud and a data center with a robot is really exciting, Kuffner says. He points to how fast computing power and artificial intelligence are advancing and sees a revolution in the making.

Strong partnerships will be the key to success, with government enabling industry to move forward with technology and companies being able to access the engineering talent and capital needed to make it all happen.

Silicon Valley has a lot of those crucial ingredients, including engineering veterans, a large concentration of capital and a business environment that can nurture budding startups, but the formula certainly can be replicated elsewhere, he says.

However, one part of Silicon Valley’s business culture is difficult to find anywhere else: Failure does not have quite the stigma it has in most other places.

Japan is trying hard to nurture a startup environment, but one of the big challenges is if a company fails, employees fear they will be unemployable. That is not true in Silicon Valley, where people who have been in the game and fought the good fight but lost are valued far more highly than those who only have been watching from the sidelines, Kuffner says.