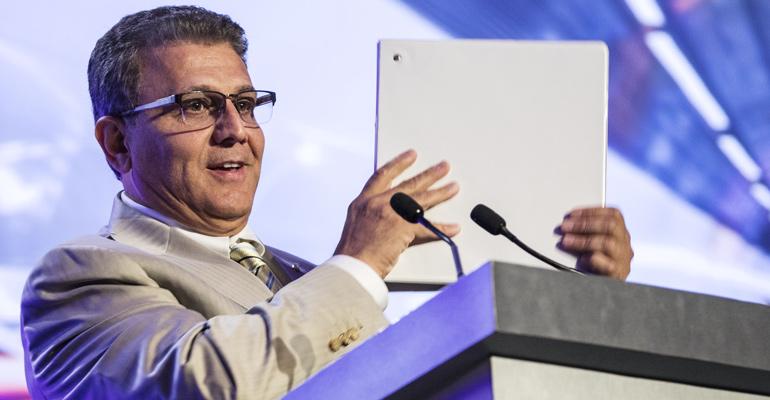 TRAVERSE CITY, MI – Toyota, one of the fastest, most efficient automakers in the world, is promising to become even faster and more flexible as mobility changes shape.

Speaking at the CAR Management Briefing Seminars here, Mike Bafan, president of Toyota Mexico, says the Japanese automaker has invested more than $31 billion in North American manufacturing plants to date and last year announced it would invest an additional $10 billion in its U.S. operations by 2022 to further beef up its North American infrastructure.

Most of the investment will be used for the gradual introduction of Toyota’s new global architecture, known as TNGA, with more manufacturing facilities and improvements in existing facilities.

Toyota already is capable of rapidly shifting products and production around the world. It recently decided to change the vehicle it planned to build in its new plant in Guanajuato, Mexico, from a Corolla sedan to Toyota’s popular Tacoma pickup, and it was not a problem making the shift.

Production has grown rapidly at the Tijuana plant. It is one of the few plants in the Toyota universe to run on three shifts.

“We went from producing 105,000 units last year and are on our way to producing 170,000 trucks this year. We did not stop production. We transformed ourselves to be twice as productive without really increasing floor space,” Bafan tells WardsAuto.

The famous Toyota Production System, immortalized by the book “The Machine that Changed the World,” was aimed at creating a very lean manufacturing environment to do more with less. Flexibility and agility make up the next elevation of lean manufacturing, Bafan says.

“That’s where you can quickly move resources around. You quickly adapt to new conditions where you go from a body-frame-integral vehicle to a body-on-frame vehicle like a truck. You should be able to do those things in relatively quick turnaround time.”

Toyota is a loom company that became a global automaker and now is becoming a global mobility company, Bafan says.

“We’re creating a new way for people to move, developing new products and services. You can’t exclude manufacturing,” he says. “How are you going to take your lean and efficient process to do whatever we need to do in a short turnaround time. That’s what we are working on now.”