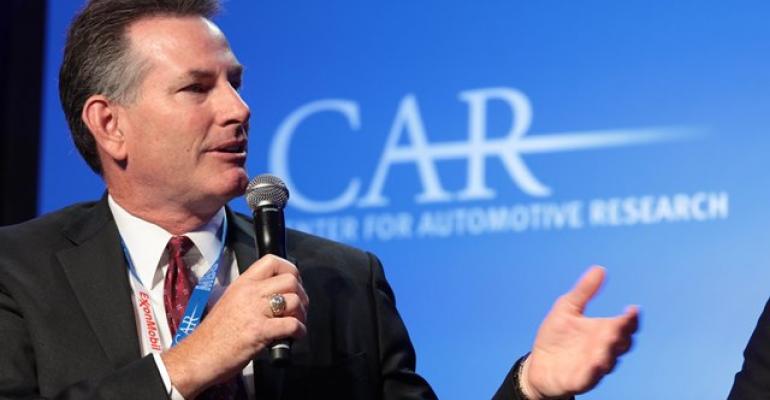 Joe Wilssens
<p><strong>&ldquo;</strong><strong>The Mexican plants are running flat out, so the Americans are losing their jobs or they are being laid off,&rdquo; Dauch says.</strong></p>
Industry News

He is the son of Richard E. Dauch, who built a legendary manufacturing career in the U.S auto industry revitalizing manufacturing operations and assembly plants. Dick Dauch’s crowning achievement was transforming a failing General Motors axle-making operation into American Axle & Manufacturing, an enormously successful independent auto supplier with an architecturally beautiful, modern headquarters that stands out like the Emerald City in the middle of Detroit.

Now 55, Rick Dauch describes to attendees at the CAR Management Briefing Seminars here the  rollercoaster of what it’s like to take over failing companies, sell off assets, close plants and lay off employees and then rebuild the businesses into financially strong entities providing good-paying jobs.

He tells attendees he is not only proud of his successes, but also of how he has handled layoffs and plant closings, speaking to workers face-to-face, treating them with respect and giving them as much dignity as possible.

Following his presentation, Dauch was asked, given the current political debate over outsourcing and competition with China, which of the world’s manufacturing regions provides the most competitive business environment from the labor and supply-chain side.

This is his verbatim response:

“Well, we’re right in the middle of the Chinese dumping, right? The steel companies won their tariffs a few months ago, so now our prices are going up on steel here in North America, which I can pass through (to customers) every 90 or 180 days.

“The problem is, I have Chinese wheels being dumped in here at numbers like $40 a wheel. My manufacturing costs are like $44. We’ve seen our margins compressed just to hold onto the market share. So we need to have something here.

“In 2010 there were 1.3 million trucks made in China. In the past year there were 700,000 trucks (built). That means there is 600,000 trucks’ worth of capacity flowing out of China all over the world right now. We see it in Brazil, we see it in Europe. Europe is more protective than North America right now, so something has to change.

“So politically, (Republican presidential nominee Donald) Trump is saying the right things. And Ross Perot said the right things (during the 1992 presidential election when Perot was running as an independent candidate). There is going to be a great sucking sound south of the border: 45% of the (heavy-duty) trucks in North America are now made in Mexico.

“The Mexican plants are running flat out, so the Americans are losing their jobs or they are being laid off, and the Mexican (workers) are making a little bit more money and their life standard is going up a little bit. That’s what is going on. I’ve seen it.

“American Axle, the plant I ran in Detroit, a huge complex with 5,500 people, I think today there are zero hourly workers at that plant, and the Mexican plant we built has probably over 4,000 now.

“So, something has to change. Otherwise the standard of life here in North America goes down. That is the angry middle class we have: The guys who can’t come out of high school anymore and get a good job and afford a cabin Up North in Traverse City.

“They have to have two jobs, their wife has to work and their kid has to borrow a bunch of money to go to college. That is the problem here in North America. It has to come to a head at some point.”