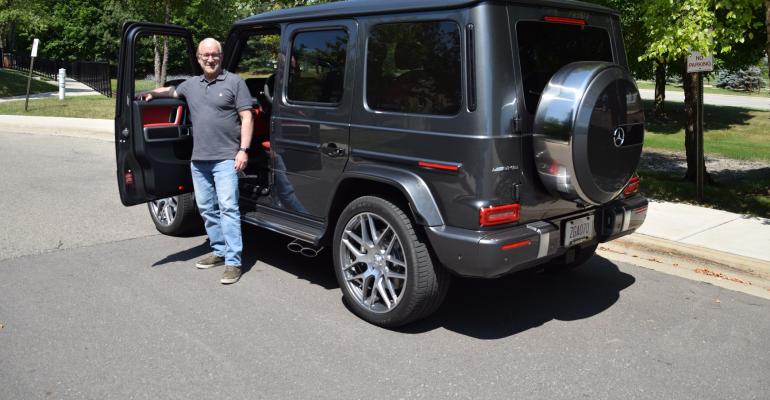 The latest variation of Mercedes’ notorious G-Class lineup looks like a burly SUV based on a former military vehicle, and it is. But it also can deliver a beat-down to many modern-day street rods.

TRAVERSE CITY, MI – The first user experience a driver has with the Mercedes AMG G63 SUV is opening the door. Mercedes-Benz cars once were touted as “bank vaults on wheels” for their solid engineering, but the doors on the G63 literally feel like they belong on a safe, a safe made of lead.

The handle is a meaty thing with a big metal button you push to unlatch the door. That’s how car doors opened when phones had dials.

But after this brief trip back in time, you are confronted with two giant 12.3-in. (31-cm) horizontal display screens: Mercedes’ all-new, reconfigurable human-machine interface.

And so begins the many glorious contradictions that define the AMG G63, the latest variation of Mercedes’ notorious G-Class lineup. It looks like a burly go-anywhere SUV based on a former military vehicle, and it is. It weighs almost three tons and it can crawl over boulders and ford streams with the best.

Yet it has side pipes like a dragster and can deliver a beat-down to many modern-day street rods. Its 4.0L twin-turbo V-8 makes 577 hp and 627 lb.-ft. (850 Nm) of torque. It will go 0-60 mph (97 km/h) in less than four seconds. It purrs like a (big) kitten while cruising, but bellows like Detroit’s best muscle cars under hard acceleration. Car and Driver reported it almost pulled a wheelie during one test.

We didn’t pull any wheelies on our 250-mile (402-km) trip from Detroit to Traverse City on Monday, but after we put our foot down a few times we don’t doubt it’s possible. Let’s just say the AMG performance braking system earns its keep.

What is harder to believe is that Mercedes would choose this $148,000 (base price) retro beast to host one of the first versions of its new wide-screen HMI and a slew of advanced driver assist systems. 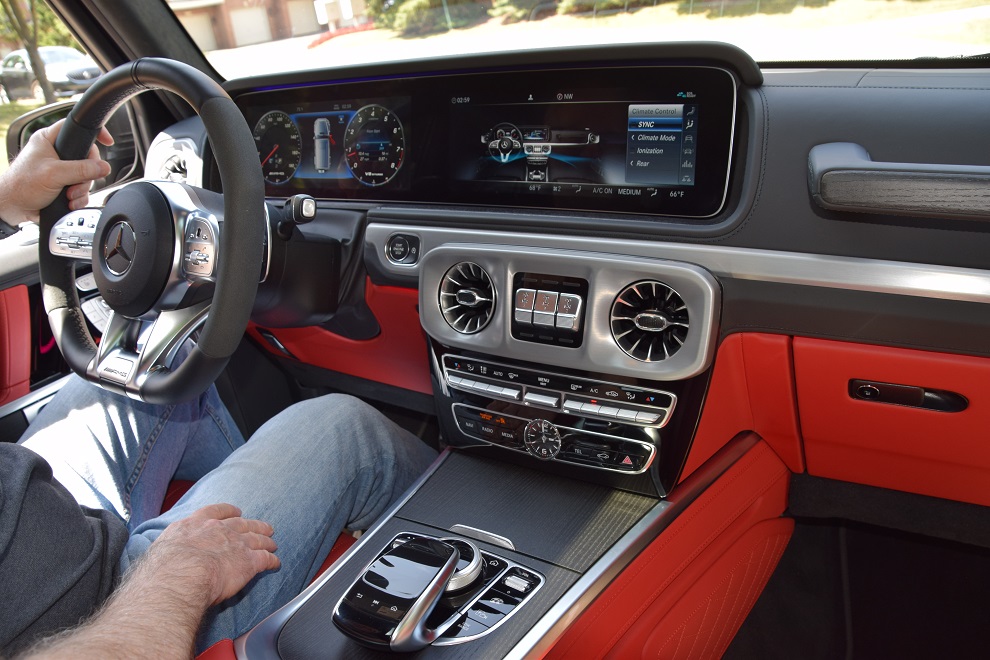 It lacks the automaker’s stellar, artificial intelligence-enabled MBUX infotainment system which debuted on the A220 sedan, but most of the other pieces of Mercedes’ new UX and safety technologies are present and – with only one exception – made for a very pleasant drive.

At the beginning of our trip, our phone paired immediately with the car and merging with Apple CarPlay via a cord in the center console was a snap. There are almost too many ways to interface with vehicle systems and functions including a dial console controller, a touchpad adjacent to the dial, two mini-thumb pads and a bunch of switches and rollers on the steering wheel, plus a full complement of traditional buttons for climate and seat functions. Voice commands also can be used for navigation.

Automakers still are in a transitional phase with human-machine interactions, so they are tending to offer drivers too many choices until universal favorites emerge. Amazon, for instance, now wants Alexa to take over many tasks inside vehicles.

Aesthetically and functionally, the two big horizontal displays do a great job. You can toggle through three choices for digital instrument cluster designs, and it is easy to scroll through detailed information menus. Unfortunately, some of the information, such as instantaneous power and torque output, is so alluring to watch it can be distracting.

On the other hand, the Distronic active cruise control is among the best we’ve tested, especially on such a heavy, powerful vehicle. Regardless of speed, the system slowed and sped up smoothly, better than a human would. There are two modes for depicting and choosing spacing distance, both very precise.

Our main complaint is with the lane-keeping assist. The best systems today keep the vehicle centered in the lane, like a part-time autonomous driving system. There is no ping-ponging between lanes or annoying warning sounds.

Serious off-road vehicles such as this one have difficulty staying centered in lanes because of axle and suspension tuning. We didn’t notice that issue much, but the LKAS didn’t even recognize most lane markings. If it hits a yellow line on the side of the road, it brakes hard and violently pulls the vehicle back into the lane. That’s good if you’re dozing off and need a jolt, but too aggressive for most scenarios. There may be a way to calibrate the system, but we couldn’t find it.

However, it’s tough to get stressed about such things when you have a choice of at least eight different massage settings, each one depicted on the center display.

And when evening comes, the interior ambient lighting is more beautiful than a sunset. You can pick your own color themes, or it will automatically give you a rainbow of alternating hues.

Yet another unexpected treat is the fact this big, ungainly vehicle is surprisingly easy to park. At low speeds steering is light and precise, and the detailed 360-degree overhead views enable you to see corners and squeeze into tight spots.