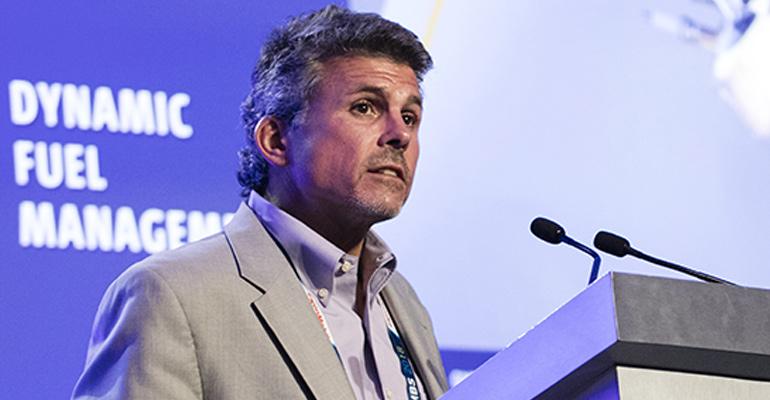 GM will turn over fewer engine families than it has historically and optimize existing architectures for use in its HEVs, PHEVs and EREVs to help preserve capital, engineering executive Mike Anderson says.

TRAVERSE CITY, MI – The only thing we know for certain is uncertainty increases over time.

“The farther out we go, the more uncertain the future is, which makes the challenge for high-capital business much more daunting,” Anderson tells a propulsion strategy session at the CAR Management Briefing Seminars here.

Anderson, who prior to January held a similar global hardware engineering position on the internal-combustion side of GM Propulsion, says widely variable government regulations around the world contribute to the uncertainty.

Many of the core technologies GM works on today, he says, center around reductions in carbon-dioxide emissions and improvements in fuel economy. And while an improvement of 2% on either front greatly affects the enterprise business of GM, Anderson admits few consumers notice.

“What is the value of that improvement?” he asks. “I can tell you four years ago, the numbers we were using at General Motors were wrong, in terms of where we are today, where CO2 credits are trading. This is a huge driver of uncertainty and the propulsion systems we choose going forward.”

But disruptive societal pressures also exist, Anderson says, pointing to how quickly sentiment turned on diesel technology after the Volkswagen scandal.  Resources are limited, too, so when revenue fails to grow, capital expenditures on engineering remain static or even contract. And consumers continue to demonstrate a reluctance to pay for innovation in the propulsion space.

GM will approach an uncertain future with flexibility, utility and the power of partnerships, Anderson says.

As far as flexibility, Anderson admits GM knows less about how the workload of the automaker’s core business is declining than how the workload on new mobility is increasing. To put some certainty in the mix, GM, for example, is cross-training engineers from the ICE side with the electrification side.

“We can make decisions, almost day-by-day or job-by-job – are they going to work on this battery tray or on this engine,” he offers. “It helps to dynamically work through uncertainty.”

As an organization, GM sees itself as a utility player, Anderson says, borrowing a term from baseball where a player can fill multiple roles. He cites the automaker’s vision to factor in a future of zero crashes, zero emissions and zero congestion.

“We don’t want to participate in that change or be affected by that change. We want to drive that change,” he says.

But, importantly, Anderson says, GM will turn over fewer engine families than it has historically and optimize existing architectures for use in its HEVs, PHEVs and EREVs. The automaker deployed that strategy first with the 1.5L turbocharged 4-cyl. engine in the redesigned Chevy Equinox, which also appears in the Chevy Volt EREV and Chevy Malibu Hybrid.

In terms of zero-emissions vehicles, GM plans to follow the Chevy Bolt EV with 20 all-new EVs globally by 2023, with two as early as next year. It has required additional investment into a metro Detroit battery lab that is already the biggest in North America.

“A lot of work in front of us, and we’re putting more money into the lab for additional capacity,” he says.

Finally, Anderson says GM wants to build closer relations with its traditional, existing suppliers and newcomers to the industry. He points to the acquisition of Cruise Automation in 2016 for its autonomous vehicle work and a partnership with rival Honda on the mass production of fuel-cell vehicles.