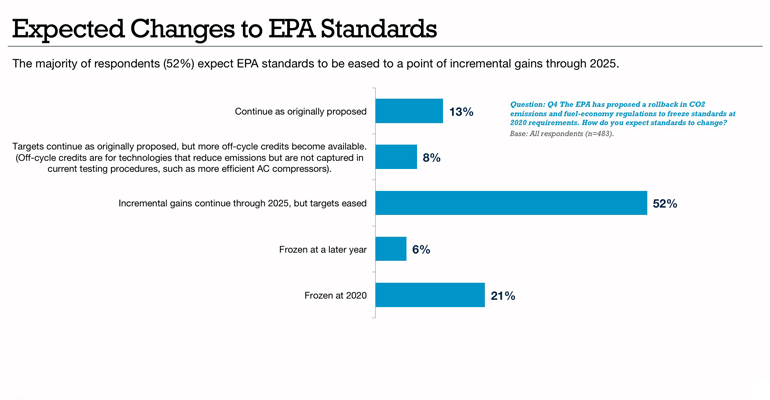 More than half of respondents expect CAFE standards to be eased through 2025.
Industry News

Almost half of 486 automotive engineers and designers responding to WardsAuto’s survey say the industry would not be able to meet 2025 targets without job losses or limiting choices for consumers.

Low consumer interest in fuel-efficient cars and electrified vehicles, rising sticker prices and the soaring popularity of light trucks and CUVs have auto engineers and designers losing confidence in the ability of automakers to meet current fuel-efficiency targets for 2025.

Those targets were finalized in 2012. Since then, low fuel prices and changing consumer tastes have caused dramatic shifts in the U.S. market. Car sales have fallen off a cliff while buyers snap up all sizes of CUVs, SUVs and pickup trucks at a record pace. At the same time, hybrid-electric- and battery-electric-vehicle market share has languished in the low single digits.

Almost half (46%) of the 486 automotive engineers and designers responding to WardsAuto’s annual survey say the industry would not be able to meet the original 2025 targets without harm to the industry, job losses or limiting choices for consumers. Only 27% think it still is possible and 28% are not sure.

Nearly half of respondents think automakers can’t meet 2025 standards without harm to industry.

The Trump Admin. is expected to announce changes as early as this week that relax or postpone the EPA’s CAFE targets.

Most respondents (52%) expect EPA standards to be eased to require incremental rather than drastic improvements through 2025.

“The CAFE requirements ignore the laws of supply and demand and mandate that OEMs build and sell vehicles the consumer doesn't want,” says one engineer. “Europe, Japan and many other regions meet targets we’re shooting for through higher fuel costs and taxes on gas-guzzling vehicles. Since this strategy would be political suicide for our politicians, the targets got set at unrealistic levels,” he says.

Only 13% expect standards to continue as originally proposed and fewer still (8%) believe targets might go unchanged, but with more off-cycle credits becoming available. (Off-cycle credits are for technologies that reduce emissions but are not captured in current testing procedures, such as more efficient air-conditioner compressors.)

WardsAuto has been surveying members of the automotive engineering and design community since 2011, asking questions about fuel economy, lightweighting and technology issues. The survey is sponsored by the Transportation and Advanced Polymers business of the DowDuPont Specialty Products Div.

The survey shows the flagging confidence of automotive engineers and designers is not due solely to market factors. Concern about the rising cost of lightweight materials also is a major issue.

The largest plurality of respondents (29%) say using lightweight materials and structures – mainly aluminum and mixed-material structures that incorporate aluminum and high-strength steel or plastic composites – is the most widely used strategy for increasing fuel efficiency among automakers and suppliers.

Almost half (47%) say investment in lightweighting programs for new product designs has increased compared with two years ago and another 35% say it has stayed the same. But concern about cost always is in the background. This year it emerged as the main reason engineers are losing confidence in the lightweight materials they need to meet future CAFE demands.

Confidence in today’s materials portfolio has diminished over time; in 2017, 24% of respondents were either “extremely” or “very confident” compared with just 11% in 2018.

When asked about the issues causing their lack of confidence in the menu of materials available, 76% indicate cost as the main consideration, far ahead of supply reliability/global consistency (35%) and impact strength 32% (multiple answers were allowed so percentages add up to more than 100%).

“The biggest hurdle to overcome is the cost of lightweighting,” says one respondent. “The technology is there, but the cost of the materials to make it happen is pretty high.”

Worries about the impact of tariffs on imported aluminum and other products no doubt influenced some responses. Nearly six out of 10 respondents (58%) say new tariffs on foreign goods will have a negative impact on their business and supply chain.

“There are a lot of external factors disrupting supply reliability and global consistency,” says a respondent. “Mostly it’s related to trade, tariffs and current government activities. It seems to be just starting, and who knows where it will end up.”

Are big investments in autonomous driving negatively impacting lightweighting, fuel-efficiency and electrification R&D budgets?
There is a perceived impact from the push to autonomy that is increasing over time: 47% reported at least some negative impact on budgets in 2017, rising to 57% in 2018.

What are the most widespread efficiency strategies?
Respondent companies are most likely to be involved with lightweighting and use of lightweight structural materials (61%), followed at a distance by hybrids/plug-in hybrids (42%), gas-engine efficiency programs (41%), battery-electric vehicles (40%) and transmission technologies (39%).

Survey methodology: On June 21, 2018, Informa Engage, the research unit of WardsAuto’s parent company, emailed invitations to participate in an online survey to 26,136 subscribers to WardsAuto. By July 22, 2018, 486 completed surveys were received. The methodology conforms to accepted marketing research methods, practices and procedures.