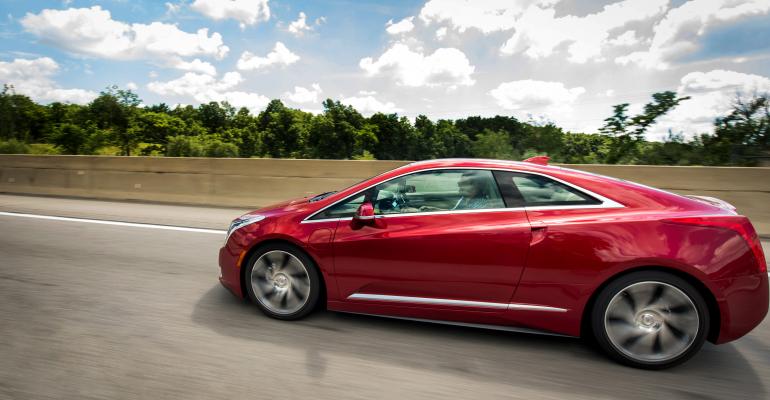 When General Motors revealed plans to sell the ’14 Cadillac ELR extended-range electric vehicle for $76,000 industry reaction ranged from astonishment to exasperation. But given remarks the brand’s marketing chief made back in January, we shouldn’t have been surprised.

“It’s the same car as the Chevy Volt,” another complains.

Well, it’s the same car as the $35,000 Chevy Volt in the sense it uses the same technology and shares some underpinnings no customer will ever see. Outside of that, no one should mistake an ELR for a Volt, especially with an interior that moves Cadillac styling into an entirely new realm.

Besides, the Cadillac Escalade and the Chevy Tahoe also share parts and technology and GM charges a $35,000 premium for the Caddy SUV. No complaints on that front. And let’s not forget, the $40,000 Tesla Model X coming in 2015 will use technology from the $70,000 Model S sedan that’s had EV enthusiasts panting since it went on sale last year.

So why all the histrionics? We should have seen this coming after Don Butler, formerly the head of marketing for Cadillac in the U.S., told WardsAuto this at January’s Detroit auto show: “(The) ELR is a luxury vehicle, and you can expect prices in those realms. There’s nothing like this on the road. Luxury buyers want exclusivity.”

Exclusivity isn’t limited to a premium price point, either. ELR production will be a fraction of Volt output, which itself amounted to a relatively paltry 24,000 units last year. So if you’re not going to build many ELRs, you might as well earn a buck on them.

Cadillac also has a bit of dilemma on its hands.

The brand needs a flagship model to punctuate its Art & Science design philosophy. In recent years, that vehicle has been the Escalade. However, the Escalade smacks of conspicuous consumption and many luxury buyers have moved on from the more-is-better-era that proceeded the U.S. economic recession.

GM desperately wants to move on from there, too, and make the buzz around its vehicles about technology, not the bankruptcy bailout.

Cadillac global marketing chief Bob Ferguson said this last week in New York about the Escalade: “This has been a de facto flagship for Cadillac, but it should not be the Cadillac flagship. We have other notions in mind in that regard.”

Until Cadillac brings to market something like the Elmiraj luxury concept it showed this summer at the Pebble Beach Concours d’Elegance, it looks like the ELR will be the new flagship.

GM has an executive team studying the Palo Alto, CA-based EV maker, and it looks like it’s decided that if the Model S can sell 1,500 units a month as it has so far this year, the ELR should be able to get a piece of the action. Never let a competitor command an entire segment. That’s certainly one reason behind the Chevy Cruze Clean Turbo Diesel, which takes aim at the Volkswagen Jetta TDI.

GM’s study of Tesla also reportedly examines the 10-year-old company’s willingness to take risks, a trait sorely lacking among Detroit automakers and one Chairman and CEO Dan Akerson has said he wants to see more of at GM.