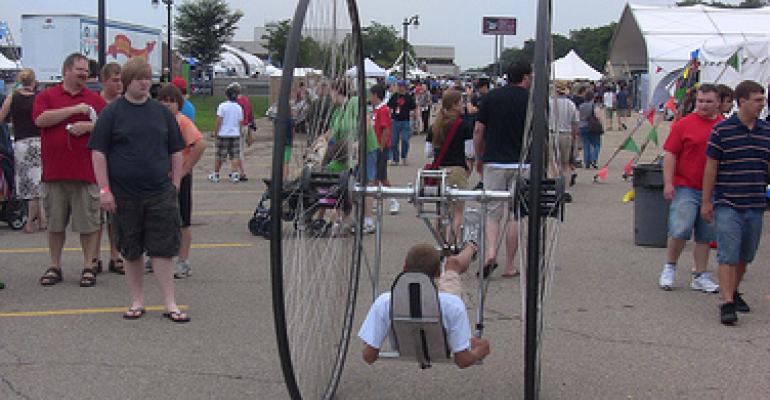 A great idea is a terrible thing to waste.

That seems to be the philosophy of TechShop Detroit, which opens in November in an Allen Park, MI, office building used several years ago by Ford for consumer-research clinics and employee training.

If you haven’t heard of TechShop, it’s a phenomenon of sorts sweeping across the U.S., intent on providing the tools necessary so fledgling inventors can bring their ideas to fruition and even to commercialization.

Detroit is the fifth market to get a TechShop, which was created in 2006 in Menlo Park, CA, as a for-profit business. San Francisco, San Jose, Menlo Park and Raleigh, NC, already have TechShops, and founder Jim Newton says Detroit will be one of hopefully three additional markets to get one this year.

And the facility will be open 24 hours a day, 7 days a week, because inspiration strikes at the darndest times.

If the equipment sounds scary and dangerous, have no fear. Paid staff will be on hand at all times to demonstrate how machines are used and answer questions. If you know absolutely nothing about certain equipment, TechShop will offer classes, which will cost an additional $50 to $100, beyond membership fees.

In all, TechShop Detroit will have 18 full-time employees. Newton says hiring is under way, but warns that pay is not great. Nationwide, TechShop has 100 employees and 2,500 members.

Newton was in metro Detroit this week to join with Ford executives in announcing the latest TechShop.

But he’s in town for another reason: This weekend, The Henry Ford in Dearborn will host Maker Faire, which is a traveling 2-day festival that started in 2006 in San Mateo, CA, as a way to highlight grassroots American innovation. It’s like Mardi Gras for inventors.

From the wild to the sublime, Maker Faire is a showcase for all things experimental, whimsical, fantastical and hysterical. I’m going for the first time with my family this weekend, and Newton tells me it’s important to arrive with an open mind.

“You’ll find yourself asking this question over and over while you’re there: Why?” Newton says with a smile.

From the steam-engine hay wagon and tornado interceptor to a humongous mouse trap and a demonstration by the “practical pyromaniac,” the Maker Faire sounds like a fun way to stimulate the creative forces in all of us.

Because of their similar missions, Maker Faire and TechShop appear to be joined at the hip, but there is no formal business affiliation between the two. However, Newton launched his company while exhibiting at the very first Maker Faire in 2006.

Ford is sponsoring Maker Faire and is instrumental in bringing TechShop to metro Detroit, for obvious reasons: Innovation drives industries, and the next great automotive technology might be on display at the event, or cultivated at the new Allen Park facility.

So far, Newton estimates some 5% of all the ideas developed at TechShops have been relevant to automotive applications. The Allen Park locale, understandably, should push that figure higher.

Another partner at the Allen Park TechShop is AutoHarvest, a new non-profit organization founded by industry experts David Cole and Jayson Pankin to inspire and harness entrepreneurship.

Other auto makers, including the Detroit Three, and suppliers participate in AutoHarvest, so the goal is to allow companies well beyond Ford to connect with inventors who are proving out their concepts at TechShop.

Newton says metro Detroit was “No.39” on his list to place the next TechShop, but that Ford approached him and offered attractive lease rates on the Allen Park offices.

Both Maker Faire and TechShop are geared around the notion that America needs to get back to making things, says Christopher Danowski, Ford’s director-technology commercialization.

“What made America great are the little inventors. That’s why we want to be part of this,” he tells me. “Everyone’s got a computer at home, but not everyone has a laser cutter at home.”

So how would Henry Ford view this idea of TechShop and Maker Faire? “He’d love it,” Danowski says.
Related