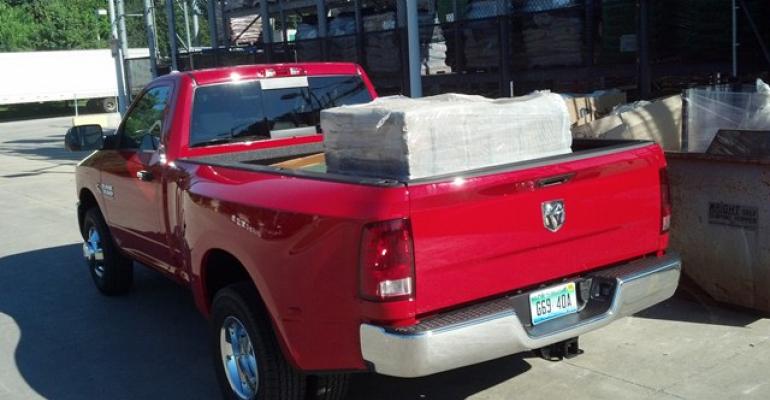 Is there anything better in life than facing a truly difficult task and then finding the right tool that makes the job easy?

I came upon this realization after spending a weekend in Chrysler’s Ram 3500 Tradesman heavy-duty pickup with a 6.7L Cummins turbodiesel. Having access to a truck with enough brute strength to pull a house off its foundation (850 lb.-ft. of torque [1,152 Nm], to be exact), I set out to put this 4-wheel beast to work as intended.

One summer project around the Murphy household is relandscaping the front yard. The English Ivy – otherwise known as Satan’s Houseplant – was eradicated during four back-breaking days of digging, sifting and root pulling. The hostas, irises and some holly bushes have been saved.

Now comes the fun part: building a brick retaining wall separating the flower beds from the lawn. Sure, I could pay $60 to have the materials delivered.

But I’m a DIY kinda guy, and I was curious to see how a pallet of 156 bricks would affect the ride and handling of this massive truck with a regular cab, 8-ft. (2.4 m) bed, dual rear wheels and 6-speed Aisin transmission.

Still, a pallet of bricks isn’t light, so I’m a tad nervous about the job.

So off I go to Lowe’s, where the crew running the garden center is impressed by the $46,785 Ram’s shiny chrome wheels, bulging rear fenders and fire-engine redness. “Nice to see the right vehicle for a job like this,” one worker says. “Sometimes people come in their Pinto.”

The woman running the forklift picks up the pallet and creeps toward the open bed. It’s an older forklift that doesn’t allow the load to be extended into the bed, then set down. So she creeps forward and has to rest about half the pallet on the liftgate, the other half inside the bed.

When she releases the weight of the pallet, I watch the springs compress at least 5 ins. (12.7 cm), and I think for a moment this will be my last Chrysler press car. No kidding, I was expecting the Ram 3500 to do a wheely.

The driver backs up, positions the forks under the back edge of the pallet, tilts it gently upward and slides the pallet forward on the heavy-duty cardboard we’ve placed in the bed. She repeats the process until the pallet is resting over the rear axle and the gate could close.

I climb in the truck thinking it would be skittish to drive because of the huge weight imbalance. Instead, the Ram is docile and downright enjoyable. Within minutes, I go from a state of high alert to fiddling with radio stations.

My only concern at that point is unloading the truck, fearing that, once all the bricks are out of the bed, I would find deep gouges in the floor from sliding the pallet. But the spray-in bedliner has done its job.

With the bricks resting in the driveway, I am able to start roughing them in, just to visualize the finished project. That triggers a significant redesign that requires 44 more bricks. I was thrilled to head back to Lowe’s for another load.

A friend told me years ago, when I bought my first house, that finding the right tool for any job can mean the difference between paying someone a lot of money or going it alone and enjoying a sense of accomplishment.

Those words were never so true after a weekend in the Ram 3500.